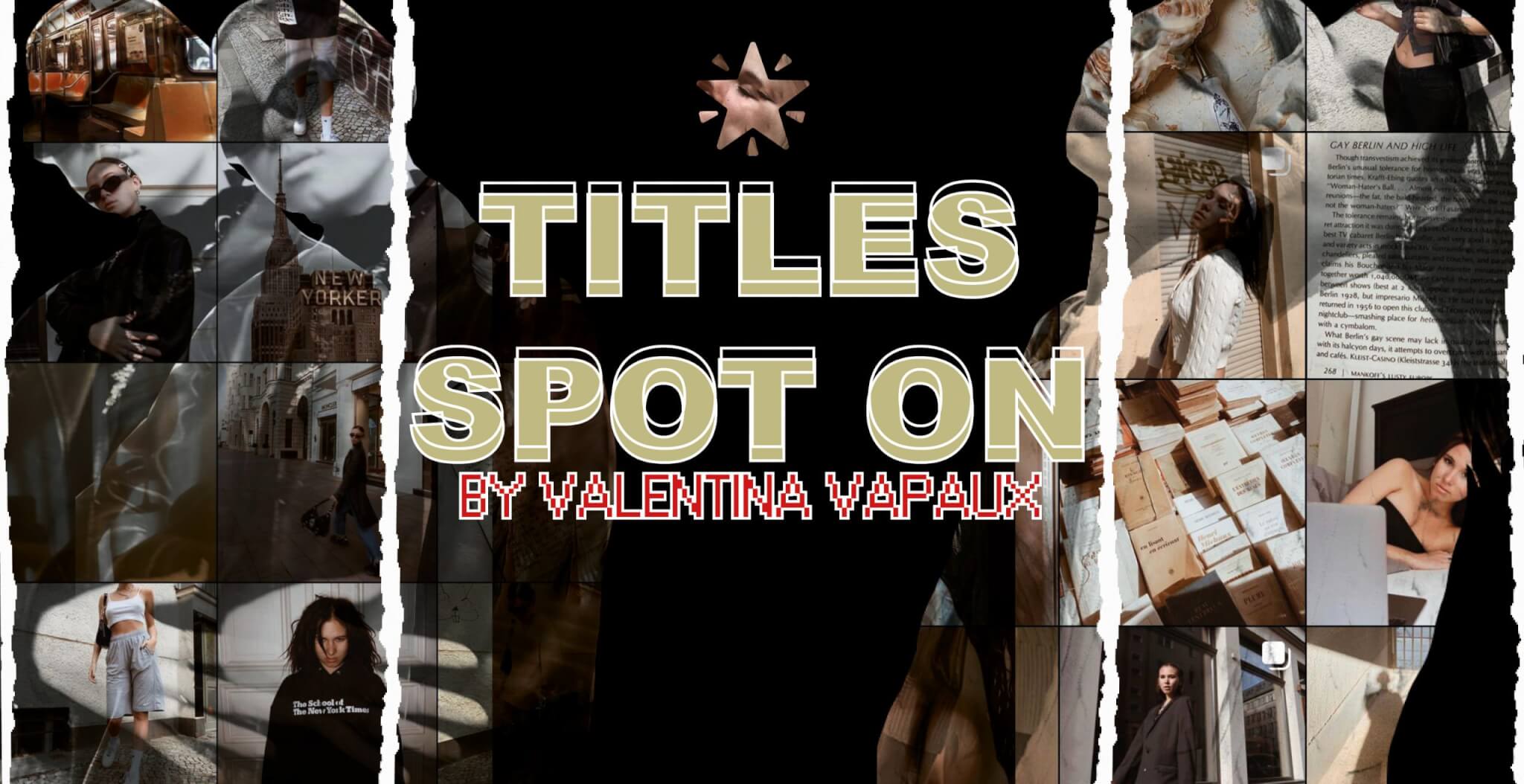 TITLE’S SPOT ON is a new format created by TITLE MAG featuring Valentina Vapaux. Its aim is giving young artists a voice and platform to reflect on current, cultural and creative topics.

Aligned with the magazines philosophy about youth culture and making an impact, SPOT ON creates room for exploration outside of what classical media demands from young writers.

“I believe it is important that young artists, no matter whether it is photographers, painters or writers are given the opportunity to publish their work. While most of online media today is driven by the advertisement market, TITLE’S SPOT ON gives me the possibility to explore writing as an art form without being restrained from how brand friendly or marketable my work is. I am very excited and honoured to share my essays, poems and more with you.”

I am at a techno party in an empty warehouse in Berlin. It is the spring of 2019. Between rusty stairwells and cheap strobe light, I find myself thinking about an apocalypse. My obsession with German expressionist poetry, dealing with topics such as decay, the end of the world, and human morbidity, had inspired me to do so. I try to imagine what it would be like if the world would suddenly change. With messy blue hair hanging in my face, I write into my phone’s notes: We will be ready when the apocalypse arrives.

One year later, I am sitting at a gate at Newark Airport in New York. I am watching President Trump’s first speech on Covid-19. My face is tired, covered in stains from dirty tears, goodbyes that will last a lifetime, and a tremendously painful heartbreak from finally discovering the freedom I had always longed for.

In these moments of departure, I realized how wrong I was. Though never truly meant serious, I was fascinated by my upper-middle-class boredom and naivety. Inspired by abstract art and poetry, I had longed for chaos and the end of the world as I knew it. For the mere purpose of entertainment and excitement. But then, change did arrive, and I was not prepared.

Especially the first few weeks of the pandemic felt truly apocalyptical. Countries with a tradition of priding themselves in their democratic liberty were not hesitating to issue stay-at-home orders that resembled past times of authoritarian states. Of course, these measures have the intent to protect people’s lives and the healthcare system, but the measures that democratic governments were taking was something that would have seemed impossible a few months ago.

‍
Sometimes I felt like being a prisoner in my own home. In a way, we were all nostalgically staring out the window onto fields or empty cities, thinking about past experiences when life felt vivid. Fascinated by how fast liberty can vanish, I find myself wondering: What means freedom in captivity?

Freedom and captivity. A pair of words that at first seems like an oxymoron. Two concepts that oppose each other like antonyms. But behind this notion lies the question of how we can still be free when diseases or other restrictions take away our freedom.

Especially our Generation, in the western hemisphere, has never experienced captivity in such a drastic measure. Still, humanity is certainly not new to the loss of freedom and the state of incarceration. The psychologist Viktor Frankl, who was the leading representative of the Third Viennese School of Psychology, survived years of imprisonment and torture in the German concentration camp in Auschwitz. His book “man searching for meaning” explains that a strong sense of purpose in life gave him the will to live and was crucial to his survival. During his time in Auschwitz, Frankl observed that prisoners who were able to keep a sense of purpose were able to survive much longer than the ones who had lost their hope.

Thank you sooo much friends for your beautiful birthday greetings and for your love and support every day!

Now, of course, most of us are not experiencing such traumatic circumstances in the comfort of our own home. But we can, nevertheless, learn from him and apply it to our smaller scale suffering. Stories from people who have survived worse than us can be humbling because they show us that our pain may not be as tragic as we experience it. But most of all, his conclusions can help us through our own state of captivity and help us find a way of coping with feelings of hopelessness and fatigue. Viktor Frankl writes: “Everything can be taken from a man but one thing: the last of the human freedoms — to choose one’s attitude in any given set of circumstances, to choose one’s own way.” He believes in the power of choosing how you deal with and adapt to situations where freedom is limited. Freedom in captivity, according to Frankl, means that while you may not be able to control the outside circumstances, you can always control your reaction to it. We are always able to choose how we approach captivity.

Ten years after Frankl’s liberation Jean-Paul Sartre, leader of a philosophical movement called existentialism, wrote his magnum opus: L’Être et le Néant (Being and Nothingness). While Frankl’s approach was mostly psychological, Sartre examined freedom and captivity from a philosophical point of view. Existentialism can be explained through its aphorism “existence precedes essence.” Traditional religion, for example, believes that essence precedes existence, God creates human existence and gives each person their own “essence” or personality. Sartre, though, claimed that humans existed before they chose their essence. Just like Frankl, he emphasized our ability to chose. To him, this was directly linked to a quiet radical definition of freedom. Sartre believed that at every point in your life, you were able to control how you acted and who you ultimately became. But such great freedom and limitlessness comes with great responsibility. If all our reactions are our own choice, then we are ultimately responsible for all our actions. This definition leaves no room for excuses regarding our behavior. Neither God nor our upbringing or pre-existing psychological conditions can be the reason for how we live our lives.

Back in October, I was free. I could walk through crowded plazas and dance to pounding beats. I could kiss strangers and embrace the ones I loved. But my head was clouded and heavy. An invisible, thick curtain had draft itself around me. I was encapsulated in a dichotomy of emptiness and pain. Immersed in depression and the feeling of floating, not living, ruled my life. Back then, I felt like a prisoner, but I was free.

Dancing with my own ghosts. ✨ ✨ (iphone shot)

‍
Especially the topic of mental health raises questions about Sartre’s philosophy. And during these times, those who were struggling before the pandemic are even more at risk. Mental illnesses such as depression, like the ones I was struggling with a year ago, create a capsule around the person experiencing them. Combined with the factual lockdown, this turns into a doubled state of captivity in one’s mind, and one’s home — the loss of freedom, inside out.

But how should we choose to react to a global pandemic, lockdown orders, and a crashing economy? Baking loaves and loaves of Banana Bread, crushing endless home workouts, or binge-watching Netflix?

It might be all or none of these. For my part, I believe that a sense of accomplishment or productivity can be very beneficial to your mental health. Luckily I was in therapy long before the emerge of Covid-19. Nevertheless, I was struck with a comeback of symptoms from a mild depression around the time that everything was suddenly changing.

To dress or not to dress, that’s the question. ✨ ✨

But I believe we have to rethink productivity in order to be free in quarantine and life after Corona. The notion of productivity is closely intertwined with the basic principles of late capitalism. Productivity, for most us, means improving ourselves. Getting more money, getting fitter, smarter, faster, better. But how should we fast forward when the world is on pause? Instead of turning ourselves into obsessive machines that are continually running updates, we should hit pause as well. At least for a moment, to ask ourselves. What does freedom mean to us? And what is our own purpose?