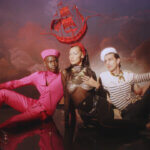 TBT: The Enfant Terrible – A peak into the beginning La Maison Gaultier

TBT: The Enfant Terrible – A peak into the beginning La Maison Gaultier

Jean Paul Gaultier was one of the most uplifting and exciting stories to follow this season. With a series of mysterious statements on social media hinting at “the end of an era”, we now know that the brand is not ready to have its final countdown.

Although Gaultier had announced its ultimatum in 2020, the French house is continuing to work with a bunch of couture collections with guest designers. They are relaunching the ready-to-wear collection exclusively for Spring/Summer 2021 which has been on hold since 2015, and in addition to the couture collection designed by Chitose Abe, who’s the founder of the Japanese brand Sacai. To announce their comeback, the French fashion house made an exclusive video featuring Bella Hadid as a mermaid accompanied by model Omar Sesay and our dear friend Qaher Harhash, who has been featured in TITLE’s exclusive Prada Story beginning of the year.

Today we want to use this occasion to revisit the past of “The Enfant Terrible” and break down his past for you.

Jean Paul Gaultier was born on April 24, 1952 in the Paris suburb of Arcueil, the son of an accountant. Gaultier did not complete any training as a fashion designer, but sent his fashion sketches to well-known fashion designers as a young man. Pierre Cardin was impressed by his skills and hired him as an assistant in 1970. In the Haute Couture house of Jean Patou, he worked from 1971 as assistant to chief designer Michel Goma and after 1973 as assistant to Angelo Tarlazzi, Goma’s successor.

Just six years later, he presented his own label. In his style, he proved himself to be a fashion revolutionary early on. He made his discoveries on the streets of London and usually did not orientate himself on the look of haute couture.

Gaultier always demonstrated a great deal of craftsmanship in his textile creations. However, he also used his work to parody the high art of fashion. Out of his non-conformist, eccentric style he created many new definitions. He created the corset dress in the 1980s, drawing inspiration from his grandmother. This creation was worn by the singer Madonna, who made the garment world famous. With this masterpiece, he achieved public acceptance of underwear and much more.

Gaultier acquired the reputation of being the enfant terrible of French fashion at an early stage. He creates very unusual, often hardly wearable fashion, which he often presents in happenings. He likes to use unconventional models such as older, plus sized women, or pierced and tattooed people. One of his trademarks is the white long-sleeved T-shirt with narrow blue horizontal stripes in a navy style. Many of his creations are derived from everyday clothing and pop culture, while his haute couture designs are strictly formal and playful at the same time. He popularized skirts for men and designed the costumes for many films such as Luc Besson’s “The Fifth Element”, Pedro Almodóvar’s “Kika”, Peter Greenaway’s “The Cook, the Thief, His Wife and Her Lover”, and Jean-Pierre Jeunet’s “City of Lost Children”. For the singer Kylie Minogue and her ‘X Tour’, Gaultier created haute couture clothing in 2008, for Madonna he designed the daring outfits of the ‘Blonde Ambition Tour’ and her ‘Confessions Tour’ in 2006, for Johnny Hallyday the stage outfits in 2003.

Gaultier crossed the boundaries of fashionable cliché thinking in 1988 by designing skirts for men. On this topic, too, he showed himself to the professional world and the public as a smart fashion revolutionary who also asks himself questions about gender-specific socialization. In addition to his standard women’s and men’s collection, the fashion designer created the young line “JPG”, with which he addresses the target group of sporty women and men. He also conquered the perfume market with his own creations. In order to market the Gaultier fragrance, the fashion designer insists on taking part in the promotional activities in person from time to time. In 1989, Gaultier made a detour into the field of music. During this time, he recorded a record without saying goodbye to the fashion world. Although his fashion look is internationally known, the Brit also got to know himself as the presenter of the television series “Eurotrash”, which is characterized by sketch productions.

In 1997, he effectively staged the longest kiss in the advertising space between Kristen McManamy and a sailor. Gaultier is considered to be his successor after the resignation of the fashion legend Yves Saint Laurent. It is already given the same status as its predecessor. With his work, Gaultier has a lasting impact on international haute couture. With his idiosyncratic breaking out of well-trodden ideas, he always delivers new concepts and eccentric models. For example, the sailor look goes back to the French fashion designer, as do the bracelets he designed from recycled tin cans. Gaultier’s latest line is characterized by clear structures and the absence of lavish forms. The high standards of Gaultier fashion are underlined, among other things, by the high quality of workmanship.

In 1990, Gaultier’s long-time partner and business partner Francis Menuge died of the consequences of the immune deficiency disease AIDS.