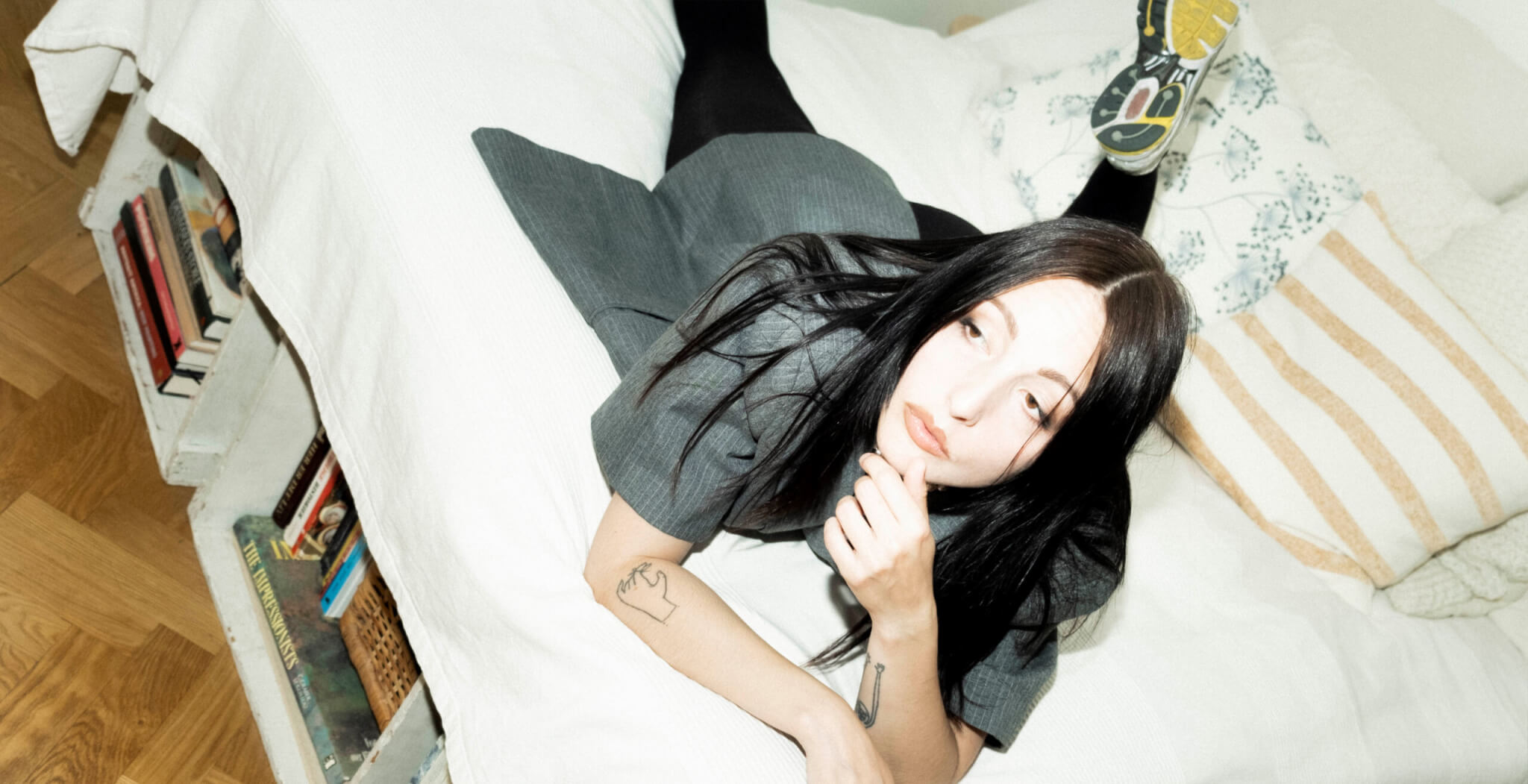 SIT IN ON FRIDAY with Brimheim

SIT IN ON FRIDAY with Brimheim

Behind “Brimheim” is Danish-Faroese musician and songwriter, Helena Heinesen Rebensdorff, who is currently residing in Malmö, Sweden. Her stage name is an homage to her Faroese roots, translating to ‘home of the breaking waves’. Brimheim possesses an emotional darkness and a sense of mystique that pushes forward with pop’s promise of catchy choruses and simple melodies. Her lyrics can be anxious, filled with confusion and vulnerability, but always accompanied by humor and hope.

Since releasing her debut EP in 2020 she’s received an abundance of praise from Danish media. The Association of Danish Music Critics has nominated Brimheim for the “Hope of the Year” award. In addition, she was selected as “Ugens Uundgåelige” (Track of the week) by national radio station, P3, with heavy rotation on both P3 and P6. Right now, the young talent is developing a way of playing solo shows – “I have one coming up for Copenhagen Fashion Week and I want it to be really tight. Also planning band rehearsals for my spring tour and other big secret things coming up. Very excited to share the new songs in a live setting.”

Additionally, Brimheim is about to release a new album this month! So, there is much to expect from this promising artist in the (near) future. To give you a sweet taste of what a performance by Brimheim could look like, we have once again an exclusive session for you today. Check it out and enjoy!

Can you remember your first contact with music or a moment that made you pursue a career in music?

I can’t remember a time where that wasn’t a clear goal! My mom is also a musician so I’ve always had that to aspire to. I guess it became more concrete and my own thing in middle school when my best friend, Amanda, and I started writing songs together in our  bedrooms. We both had a rebellious drive and quickly became fascinated with alternative rock and punk music. The expressiveness and freedom it represented was very formative for me. It was a liberated time that extended my childhood creativity into adulthood.

Your music is melancholic poetry, somewhere between goth-pop and indie rock. How did you find your personal musical style?

I think it helped that I stopped trying to make it fit into a preconceived box. When I gave up attempting to control the outcome, this is the type of music that came out of me naturally. It’s very intuitive, and that’s how I prefer to work. I kinda detest the idea of genre – it limits my thinking. I just want to feel something when I write. Whatever sounds fit the particular feeling I’ve grasped out of the ether is where I’ll go.

I write most of my songs on guitar and am obviously shaped by the kind of music I’ve listened to a lot – especially in my formative years, so that’s probably why it has a general indie rock feel.

How do you know which topics to write about? What does your writing/production process look like?

My approach is always very intuitive. Usually when I start out, I just have some chords, a half-baked melody, and a vibe … then words will start to form. Sometimes it will be apparent immediately what they’re about – other times It takes some rigorous editing and hard work to get everything to fit.

With this record, most of the demos I brought to the studio were super rough sketches which was a new way of working for me. Usually I want to know the structure of the song before doing any production work but this time I really enjoyed the open-endedness; it made the whole process very playful. Søren Buhl Lassen, who produced my new album with me, is such a massive talent. It was an incredibly gratifying experience creating everything almost from scratch with a close collaborator like him.

Which role does your Danish-Faroese background play? What else did it influence besides your stage name “Brimheim”?

My Faroese family is very artistic and musically gifted. The Faroe Islands as a culture is generally artistically expressive. Everyone sings and music is an integral part of the social fabric. I’m proud to be part of that legacy. At the same time, I’m definitely a city person, and Copenhagen is my forever home, so perhaps that contrast is partly responsible for the dynamic range in my music.

Your latest release “favorite day of the week” addresses being honest about being unsure and admitting feelings. Why did you wanna write about this topic?

In my songwriting I always like to explore the sides of existence that I feel are hard to discuss and process otherwise. The story of ‘favourite day…’ is fictional but based on feelings I’ve experiences before. Admitting selfishness, fear of rejection, and accidental lack of consideration for someone you care about is an unpleasant thing to do and that type of inner conflict makes for a great songwriting topic.

Your music video for “poison fizzing on a tongue” shows you in a full suit of armor in the misty mountains of Faroe island. How do you like to express yourself visually?

The video was directed by a good friend of mine and fellow faroese queer artist, Heiðrik á Heygum. I’ve always loved his visual style and felt like it paired particularly well with the ‘poison…’ song. I like to give large degree of freedom to my visual collaborators – especially when I trust their artistic vision. I have a strong sense of who deserves that trust and those are the people I choose to work with.

I am also still experimenting with styles though. Working on this record along with the accompanying visuals and campaigns has given me a better idea of what I like and where I’d like to take it next.

Talking about visuals – you’ve illustrated the artworks for some of your song-covers. Which role does art play in your life?

Drawing and painting has been a main hobby since before I could walk – I even thought for a brief time in my early 20’s that I was gonna be an artist or illustrator by trade. But I like to keep it something I do for fun – a way to unwind and turn my brain off. All the illustrations for single covers and for the album are just that – drawings I made for fun. Whenever people ask to buy my art or ask me to make a custom piece I sorta start sweating. Obviously I appreciate it a lot, but I find it challenging to make something cool when there’s any kind of expectation attached to it. With music I don’t have that problem, so I probably chose the most fitting career out of the two.

This January you are going to release your new album “can’t hate myself into a different shape”. What can we expect thematically and musically?

The album is about self loathing vs. self acceptance. It’s about depression, self-harm, and mental illness. But it is also about tender resilience, recovery, and hope.

What goes through your mind when thinking about the release of your album? Is there a song or any other aspect you’re especially proud of?

I’m in love with the eclecticism of the record. I’m very proud that we didn’t shy away from any of our creative whims – that courageousness helped us birth an imaginative piece that really works as an album.