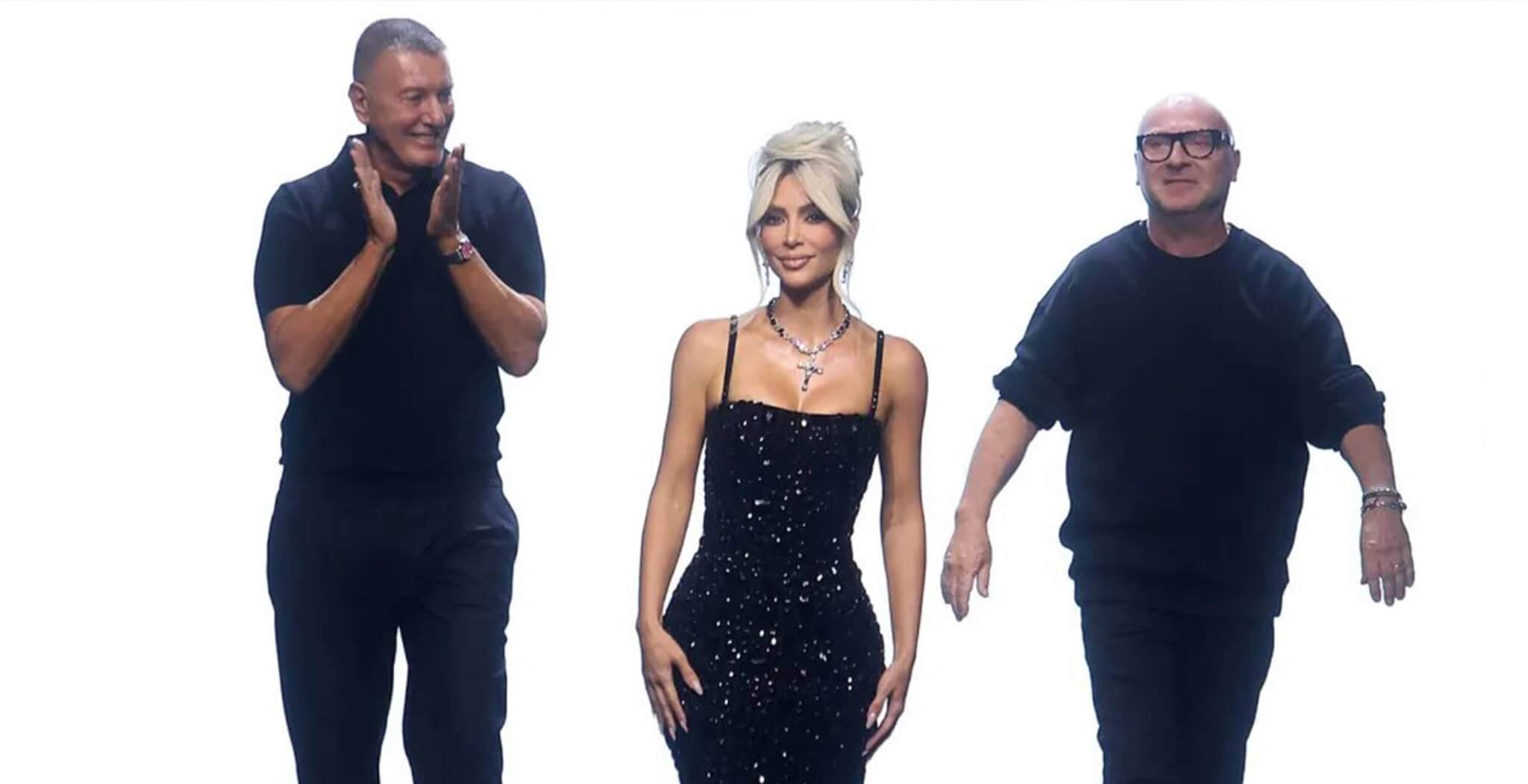 Domenico Dolce and Stefano Gabbana have a penchant for celebrities, as all houses do at the moment.

But they did not collaborate with just anyone for this year’s Spring Summer 2023 collection:  Rumors have been swirling in the fashion scene for some time, and at Milan Fashion Week Dolce & Gabbana confirmed at a press conference: the entire spring 2023 collection of the Italian fashion house was created in collaboration with Kim Kardashian.

Thus, at the fashion show, instead of the usual colorful designs of the brand, which likes to use floral or mosaic patterns from the Renaissance, the models wore mainly opulent dresses in black and white. The main focus that heavily inspired the collection is lingerie. This includes second-skin dresses, jumpsuits, stretch fabrics, corsets and visible bras, all iconic pieces of the brand reinterpreted under Kim’s watch. What a surprise, lingerie seems to be Kardashian’s hobbyhorse…

A liaison between the Kardashians and Dolce & Gabbana had already begun in May, when the brand dressed the entire family clan for the wedding of Kourtney Kardashian and drummer Travis Barker. However, the collaboration is anything but a given. It was only four years ago when Stefano Gabbana, the loudest half of the designer duo, called the Kardashians “the cheapest people in the world” in a now-deleted Instagram comment.

Therefore, the question arises: Why does the Italian fashion house need someone like Kim Kardashian? Or to put it another way: Why does a superstar of Kardashian’s caliber support designers who have been out of favor for years? Has she forgotten the scandals surrounding Dolce & Gabbana or suppressed them for the sake of the alleged million-dollar deal? Kim Kardashian has often spoken about the fact that she was not taken seriously in the fashion industry for years because she was only seen as a reality TV starlet. For years, she was banned from the Met Gala, the biggest fashion event of the year. Only since a few years (evil tongues claim since the marriage with rapper Kanye West) Kardashian is no longer to be excluded from the front rows of the fashion scene. Therefore, the answer to the question why Dolce x Kim could come to stand at all is quite simple:

Dolce & Gabbana want to profit from the Kardashian-Spark. It’s a well-known fact that what the Kardashians touch usually turns to gold, and Dolce & Gabbana can more than use that right now, since their business has been going downhill for quite some time. Non the less because of Gabbana’s controversial tweets and Instagram posts, such as when he called singer Selena Gomez “so ugly” on Instagram. But Dolce also caused an uproar in 2015 when he spoke out against adoption by homosexual couples in an interview. Moreover, he referred to children born through in vitro fertilization as “synthetic” and “chemical offspring from a rented uterus” – the Kardashians, notably, have several children carried by surrogate mothers.

In 2017, the designer duo hit the negative headlines for their public support of Melania Trump. Dolce & Gabbana quickly reacted with a rather tasteless campaign in which they immediately boycotted themselves. For example, they sold T-shirts with the inscription “#Boycott D&G” for around 250 francs to mock their critics.

But back to the collection:

Designers Dolce and Gabbana presented their spring/summer 2023 collection curated by Kardashian against the backdrop of a film showing Kardashian, styled as a starlet, sensually eating a plate of pasta.

The two designers have a soft spot for pasta-eating women – a quick reminder for anyone who might have forgotten: The most disastrous shitstorm followed in 2018, when Dolce & Gabbana sparked a racism scandal. The fashion house was actually planning their biggest fashion show to date in Shanghai in order to conquer the lucrative Chinese market. Vogue even wrote of an “ode to China” – but then the show had to be canceled at short notice. The reason: three promotional videos entitled “How to eat with chopsticks” that the brand had released to celebrate the occasion.

In them, an Asian model somewhat awkwardly tries to eat Italian dishes like spaghetti and pizza with chopsticks while being lectured in Chinese by an off-camera male voice. “Let’s use these little stick-like things to eat our great pizza margherita,” the man says. When the model tries to bite into a cannoli, he condescendingly asks, “Is it too big for you?”

The campaign, which was perceived as racist, was slammed on social media – including by an Instagram user who promptly received an Instagram private message from Gabbana in response to her criticism. In it, he called China a “shithole country” and the Chinese an “ignorant, dirty stinking mafia.” Although Gabbana later claimed his Instagram account had been hacked and the designers apologized for their “transgressions,” they were forced to cancel the fashion show – in part because well-known Chinese film stars and models refused to attend.

So was the SS23 collection – or the marketing stunt – launched out of sheer desperation? This is an impression that Dolce & Gabbana and Kim Kardashian obviously want to avoid. Thus, they emphasize the long-standing connection between the star and the fashion label: Kim had always admired her mother’s Dolce & Gabbana dresses even as a child, and several of her family dogs were named after the famous designers.

Although stars like Cardi B and Jennifer Lopez have worn the brand’s clothes on the red carpet since the scandal broke, the big hype has failed to materialize and many celebrities still avoid being associated with the brand. The fact that Kim Kardashian is now making common cause with the canceled company has been met with harsh criticism in the social media. Perhaps it’s not desperation that brought the designers and the reality star together, but empathy. Kim has also often reaped harsh criticism of her companies. Keyword: kimono.

But one is for sure: it’s definitely not “Ciao, Kim” and Goodbye D&C History of problematic behavior