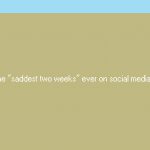 The two weeks beginning from May 26th were the “saddest two weeks” ever on social media, as a new research by the weekly science journal “Nature” shows. At the same time, social media accounts like “Goodable” or “Some Good News” are hitting new highs as we all need some empowering and encouraging news bits to brighten up our mood. Or as “Goodable” puts it: “Good news, when you need it the most”.

As hard as it is to see, the good has always been there and will always be there – and the more we are hurt and surrounded by devastating news, the more this is put to test. Our social media feeds are a constant stream of negativity and fear and we urge you not to look away from all the stuff happening right now: your engagement and actions are now more needed than ever, at the same time a daily dose of kindness and positivity will make you feel better and prevent you from filling with bitterness.

And who doesn’t need some wholesome stories about a airport sniffer dog officially retiring and the big surprise on its last working day?

“Some Good News” is actually a project of John Krasinski, better know as Jim Halpert from “The Office” and the main actor from “A Quiet Place” and “Jack Ryan” on Amazon Prime. His web series on YouTube already featured Brad Pitt, Chance the Rapper, Billi Eilish, Ryan Reynolds, Emma Stone, Emily Blunt, Jon Stewart and you can check it out here:

Following a bidding war his show now moves to Comedy Central and will continue sometimes later this year. Enough time to check out the already existing 8 episodes so far.