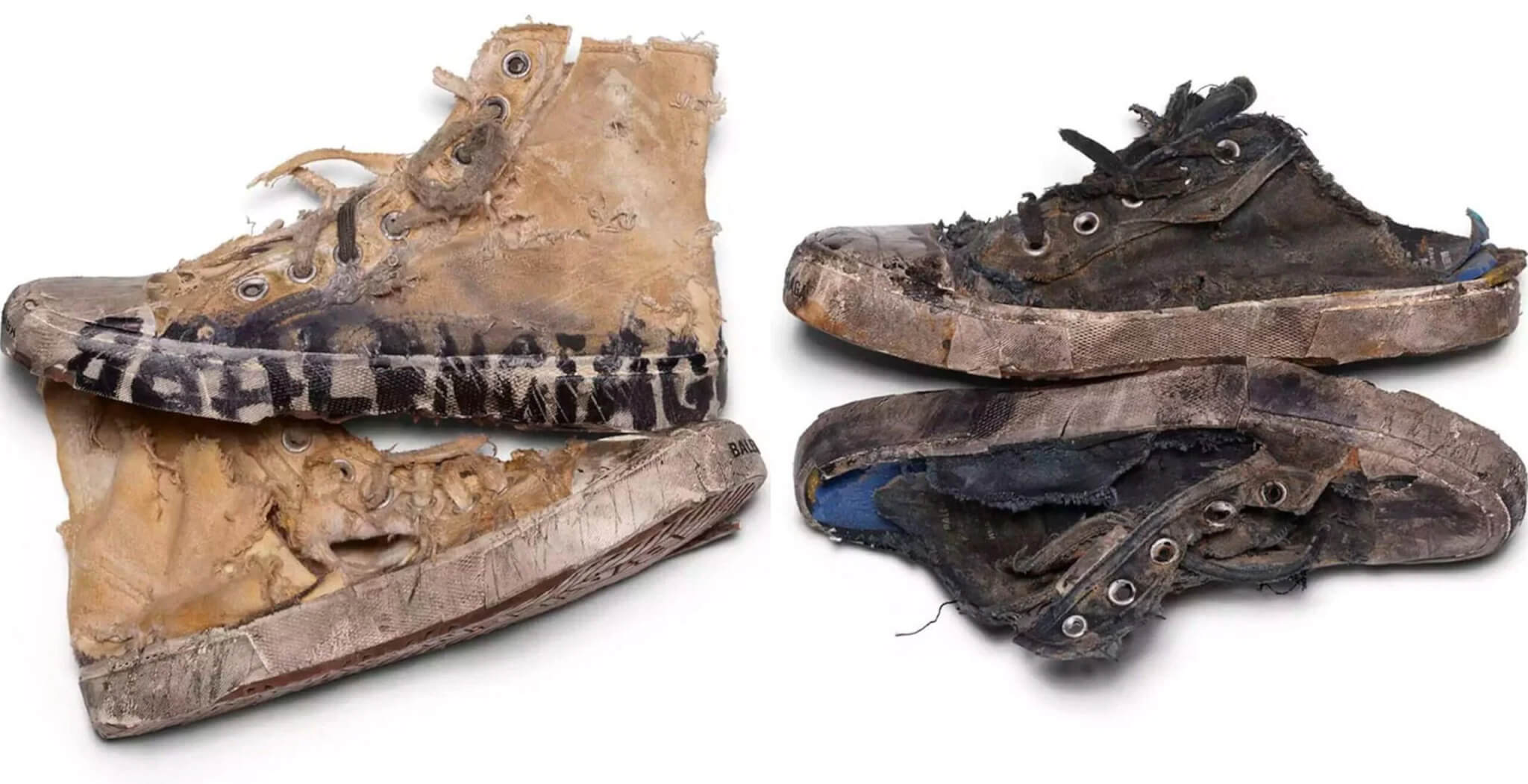 Why Fashion Loves To Cosplay Poverty

Why Fashion Loves To Cosplay Poverty

Balenciaga grabbed a megaphone and shouted: Poverty but make it (somewhat) desirable!

The Parisian fashion house is considered one of the most talked about brands in the world. The recent “Paris Sneaker” now poses a whole new challenge to the outrage-prone fashion world. For good reason.

You can imagine the “Paris Sneaker” as a classic “Chuck Taylor All Star” from Converse, in both versions: ankle-high or flat (and as a mule/slipper). So the shoe shape is not new at all, and it’s the complete opposite of the triple-layered “ugly sneakers” that played an important role in Balenciaga’s rise to become a billion-dollar company and the most talked-about fashion brand in the world today. And creative director Demna Gvasalia wouldn’t have landed at the top if he didn’t add a good dose of controversy to the “Paris Sneaker.” He had stylist and photographer Léopold Duchemin shoot a campaign featuring a limited edition of the shoe: The “Paris Sneaker Full Destroyed” is all tattered, smeared, brutally aged. “These still lifes suggest that you wear the shoes all your life,” the press release says slyly.

1450 euros costs the “Paris High Top Sneaker Full Destroyed“ (let that sink in for a minute). The shoe will only be produced 100 times so it’s very likely that its resale value will increase to many times its price in no time. If you think about it, the shoe could never function as it would be supposed to – it’s a sculpture: if a shoe were used as intensively as the “Full Destroyed” suggests, it would probably fall apart at some point. In this respect, the Balenciaga sneaker is a fabulously exaggerated version of what it purports to be.

However, the shoe is not stylish nor controversial, nor does it provoke thought or add anything to ones interior. The „Paris Sneaker“ is nothing but pure ignorance and shows how tone deaf the fashion industry can be.

The “Paris Sneaker“ is a prime example of fashion romanticizing poverty and benefiting the „trashy to trendy pipeline“ immensely. But the most sensitive point about the destroyed shoe is this: How distasteful is it in a world where hundreds of thousands are fleeing war in Ukraine? Demna Gvasalia staged his last fashion show in Paris as a parade in a staged snow storm The models braced themselves against the wind and cold and looked as if they were carrying all their belongings in sacks. These bags, of course, are the new “it” bags. The designer then spoke about his family’s flight from Georgia when Russia forcibly occupied part of the country. His own biography was his motivation to reflect the Ukraine war in his designs and productions as well. According to a respectful discourse logic, one should not contradict nor try to refute with such backgrounds. But a brilliant mind like Gvasalia is of course aware of the internal contradiction between luxury products that play with the aesthetics of poverty and displacement and also the moral outrageousness.

However, in all fairness, Balenciaga may be the most current brand marketing its luxury goods with the “aesthetics” of poverty and suffering – but it’s not the only one.

Fashion is a reflection of society’s zeitgeist. Indeed, the current state of fashion seems to echo the current turmoil faced by the world. The fashion industry is fast-paced and has been a repeat offender of cultural appropriation. Oftentimes, the subject of appropriation is poverty.

“Fashion and poverty have always had a relationship,” said Nicola Cooper, senior trend researcher and analyst at Nicola Cooper and Associates. The Japanese influence of the 1980’s, such as Rei Kawakubo’s “sack dress”, characterises the aesthetic of poverty.

The current world of anxiety under the threat of upheaval and violence has been “translated into different styles of clothing,” said Cooper. This can be seen in “deconstructionism fashion”, identifiable by distressed fabrics, tears, frays and holes. A example of this is Kanye West’s Ready to Wear 2015 fashion collection, which received heavy criticism. Renowned fashion journalist Anna Wintour described this collection as “migrant chic”.

Pop culture isn’t shying away from making poverty „sexy“ either. Kim Kardashian, pop culture icon of our time, posed together with her family in a seemingly lower income neighborhood, eating cereals with plastic cutlery and photographing everything for the gram.

Kim’s not the only member of the Kardashian clan jumping on the poverty chic bandwagon. Little sister Kylie Jenner has been spotted rocking the ultimate rural poor emulation trend from the ’00s : the Von Dutch trucker hat. Other wealthy celebrities, too, have been posting photos to Instagram of themselves acting “poor.” Vogue Australia’s shoot with Selena Gomez, for example, features the former Disney star posing in a run-down home. Supermodel Bella Hadid has posted a photo of herself gone full aughts-era mallrat with an ironic caption, “pinkys up.” On Instagram, Hailey Baldwin posed with McDonald’s food, calling it “#essentials.”

The question isn’t whether or not poverty chic is making a comeback — it’s why.

Much the same as cultural appropriation, poverty chic is an act of “cherry-picking.” As Refinery29’s Leeann Duggan writes, “It glibly looks at the world with a purely visual eye, and refuses to consider meaning.” The celebrities and fashion elites flaunting these signifiers of poverty have likely never lived through the abjection they’re mimicking.

This fascination with the lives of those less fortunate is nothing new for the rich and famous. Christian Dior’s spring-summer 2000 haute couture collection, designed by John Galliano, is often considered the birthplace of “homeless chic” in fashion. The collection was a mish-mash of ripped fishnet, belts made of found items, and scrunched-up garments in newspaper print, all twisted together in a futuristic, Dickensian style. At the time, it was harshly criticized by his peers and the media, in much the same way Kardashian’s photos are facing a backlash now. Galliano called his detractors “bourgeois people, condescending and smug,” excepting himself from actually being bourgeois — as Kardashian was attempting to with her Instagram pictures.

What is it that drives the upper class to aspire to look poor? Why are celebrities  and fashion houses looking for dilapidated environments in which to pose in grungy, mismatched, oversized streetwear? This trope of “acting poor” has a lot to do with the romanticization of poverty, projecting a purity onto the poor that the rich just can’t seem to buy.  In an article addressing the phenomenon of poverty chic from 2002, writer Zoe William posits in The Guardian that the notion of poor equating to “cool” is “timeless.” This, it is argued, is rooted in religion, and the core “notion of the poor being inherently pious.” The poor, unlike the privileged, are exonerated from guilt, something the upper class rich are eternally shouldered with. This condescending idea of the “pious poor” might be what’s propelling the currency of struggle in the modern climate.

The glorification of poverty is intrinsic to the wider perception that this generation’s trendmakers have never actually endured any kind of palpable struggle.

But back to the Paris Sneaker: No matter how tasteless and tone deaf the shoe may be – some people will buy it. And that is precisely the point of this crushed shoe for 1450 euros. It concretizes the almost unbearable contradictions of the world: the coexistence of luxury and frivolity and human suffering.