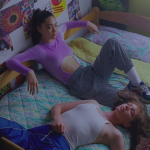 What to listen to this week

What to listen to this week

The music gods have been good, blessing us with quite a few bangers for every occasion these past months. If you haven’t already, you should check out Tame Impalas ‘It might be Time’ making us very excited for the upcoming album ‘The Slow Rush’, which is due to be released on Valentine’s Day 2020. Great, so at least we’ll be #foreveralone with the silky smooth sounds of the Kevin Parker-led fivesome.

New and probably coolest girl on the block: Greentea Peng, provides us with cozy and soulful chill vibes on her new track ‘Sane’.

The London singer will most definitely warm you through the winter, as will Biig Piig, who has just released a lush EP. On the track ‘Roses and Gold’ the 21 year-old proves once again – Spanish is the most sexy language on this planet (sorrynotsorry French lovers).

R’n’B fans get all the feels on ‘Come Thru’ by Summer Walker and Usher, and our favourite Kitty Doja Cat makes most rappers look amateur on catchy tune ‘Rules’ with a flow comparable to Kendrick Lamar’s. Check out the music video below, in which Doja transforms into a reptilian gangster.

Gen X favourite crooner Rex Orange County starts his new album ‘Pony’ with a bang. The song ’10/10’ is as personal as ever. His lyrics feel like something you’d rather write in your diary, not sing to millions of people – but that’s exactly what makes the Singer-Songwriter so unique. ‘Pony was written and recorded entirely by Alexander O’Connor, with a little help from his brother Ben Baptie.

Oh and then there’s the upcoming Mura Masa album with undeniable banger ‘No Hope Generation’. Definitely worth checking out the incredible visuals to this lead single shot by all time fav videographer Yoni Lappin.

Now for everyone in search of songs to dance to, the UK is not playing. With releases by Aitch – ‘Buss Down’, Tion Wayne & JAY1 ‘2 on 2’ and NSG – ‘Trust Issues’ – UK Rap has never sounded better.

The long awaited bop ‘Revenge is sweet’ by British rap duo Krept & Konan impresses with some exquisite features, Tory Lanez on ‘First Time’ being one of them.

Louisiana native rapper Youngboy Never Broke Again is providing us with the club banger ‘Make No Sense’ and if you live under a rock and haven’t heard Kanye’s ‘Jesus is King’ album by now, do yourself a favour and add ‘Follow God’ to your gym playlist immediately! (Also, check out our review of the album here)

HIGH TWERK ALERT on Rapper DaBaby’s second album ‘KIRK’, coming out only 7 months after his breakthrough project ‘Baby on Baby’. The songs ‘Toes’, ‘BOP’ and ‘VIBEZ’ are gonna have you on the dance floor in no time, promise!

From diaper wearing rappers to ex boy-band idols – Harry Styles is finally back from hibernation announcing album number two with lead single ‘Lights Up’. Questions of Identity at its core, the new single is offering a glimpse into Harry’s state of mind, making pop lovers hearts pound faster.

Rock and Indie Fans go listen to super cool Newcomers Hello Yello and their recent single ‘Lifeguard’ or ‘Feel that Again’. UK sweetheart Bakar pours his heart out on his six track EP ‘Will you be my Yellow?’, with some mellow reggae tunes in “Hell and Back”. Also, Creeper’s ‘Born Cold’ has me head banging for days.