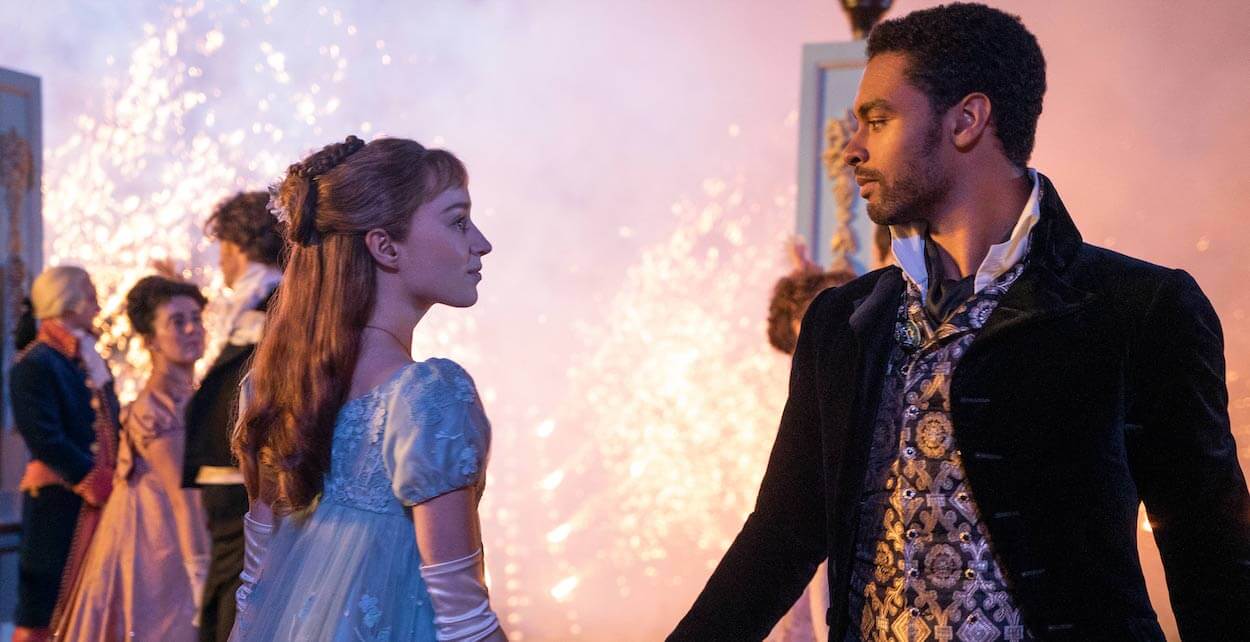 What makes Bridgerton so visually appealing?

What makes Bridgerton so visually appealing?

Escapism describes the longing for an imaginary or possible better reality and thus the escape or avoidance of the real world and its difficulties. It is a desire that is not unknown to some of us in recent weeks because the current world situation makes us quite strive for something beautiful and retreating. Shows and books often provide said visual and imaginary hiding place and so does „Bridgerton“.

Bridgerton is the hit Netflix show that follows the wealthy Bridgerton family through Regency England. The show was directed by Shonda Rhimes and chases around the Bridgertons, the Featheringtons, Queen Charlotte, the Duke of Hastings, & Lady Danbury as they romance and intertwine their lives. Bridgerton is visually delightful and narratively addicting, with characters that are easy to fall in love with, splendid performances, and a bright colorful aesthetic.

Produced by Shonda Rhimes and created by Chris Van Dusen, the show is an adaptation of the first of Julia Quinn’s bestselling book series of the same name. It follows a high society family of the London ton in the early 1800s, a setting those who love Jane Austen’s work will be familiar with. The wealthy Bridgerton family is composed of eight “perfectly handsome sons and perfectly beautiful daughters,” who are named in alphabetical order.

On a surface level, Bridgerton has all the elements that typically make up a popular piece of drama – beautiful people, sex, scandals and gossip. Some might say that the show is a successful mix of a Jane Austen period drama and Gossip Girl.

The design of the show isn’t perfectly historically accurate (the stays worn in the Regency era wouldn’t have been tight-laced like later corsets), but it does an admirable job of replicating the period’s silhouettes. Plus, the bright colors and sumptuous fabrics make for a great visual experience. The production design is also fantastic, with numerous beautiful houses and gardens. Luckily, the showrunners and costume designers had no desire to make the show historically accurate, which made it a really fun mishmash of styles and references that were diverse and cool to explore!

Based on the Bridgerton series of books by Julia Quinn, the highly binge-able series is a feast for the eyes, with a sugary Sophia Coppola (Director and screenwriter of, for example, Marie Antoinette and Lost in Translation) aesthetic and colour palette and dreamy displays of opulent fashion. Though set in the 1800s, the series feels modern; the cast is diverse, with Regé-Jean Page playing the main first season love interest, Simon, Duke of Hastings, and Golda Rosheuvel taking on the role of Queen Charlotte. The soundtrack consists of covers of current pop songs by a string quartet. Much of Britain’s colonial history is forgotten in the colour-blind casting of the show, which allows us to see bodies that are rarely represented in such period pieces. Such beautifully diverse casting is another Rhimes speciality; the cast is both aesthetically and emotionally pleasing. This creates an image that is rich in every way, the clothes, the people and the landscapes are an intricately composed delight. The visuals and cinematography were stunning and everything one could want in a modern show set in the 1800s. The color palette remindes one of Autumn de Wilde’s 2020 film “Emma.” which was a movie adaptation of Jane Austen’s novel “Emma”. The pastels perfectly captured the fun, optimistic and petite aesthetic and mood of the show.

In short: The show is undeniably sexy and oh-so-romantic and the perfect retreat for tired eyes and those who crave a little more escapism in recent days.