Anna Delvey Is The Original Girlboss

Anna Delvey Is The Original Girlboss 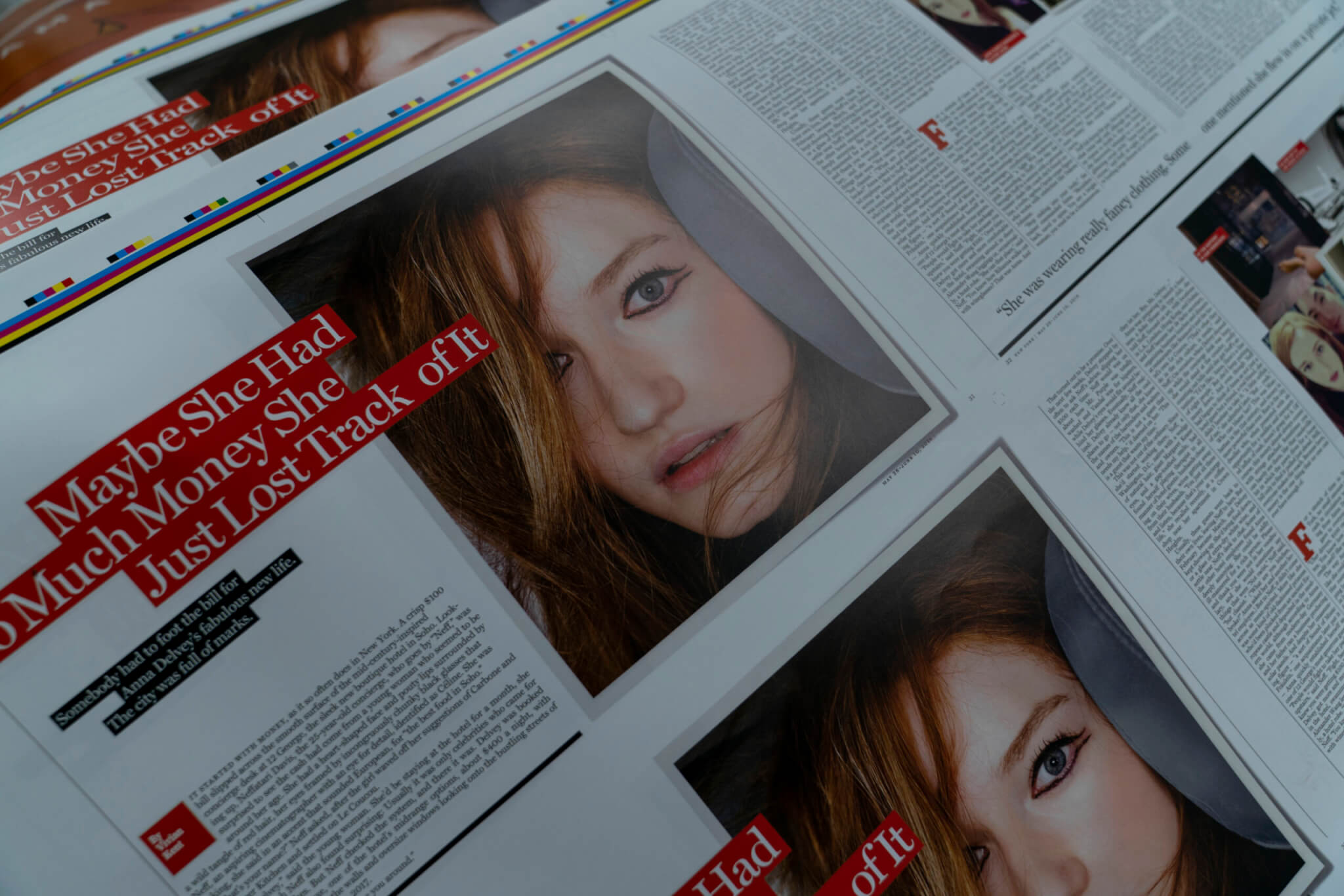 We live in a time of self-representation, an era in which form comes before content. Aesthetic appearance determines consciousness – and commodity aesthetics reigns. In short: The aesthetic shell means everything and the backround almost nothing.

One person who kept the aesthetic appearance like no other was Anna Sorokin aka Anna Delvey. A young woman in search of fame, power and recognition in New York high society, who wanted to live the American dream. She became the Russian heiress she wanted to be.

The “Anna Delvey” case caused a sensation in 2017. Russian-born Anna Sorokin was on trial at the time for defrauding hotels and private individuals of a lot of money under a false name. A story worthy of a film, which had its tragic end in a prison sentence of several years. Now the story of the now 31-year-old con artist has been produced by Netflix.

“Inventing Anna” is the new Netflix series by Shonda Rimes that tells the true story of German Anna Sorokin, played by Julia Garner.

It’s a story of deception, of glamour and money, and most importantly, of how clothes, entire looks, determine who you are. Anna Sorokin came to New York sometime in 2012, her name is no longer Sorokin, but Delvey. She’s no longer a normal German student, she’s (APPARENTLY)  an heiress to a dynasty. She has money, she has power. Gucci, Prada, Céline and other designers are her ticket to the world of the rich. She throws money around and leads high society by the nose. As charming as she was calculating, Delvey snagged front-row seats at New York Fashion Week, gained entry into the art world, became a regular at the city’s best restaurants, and vacationed on yachts.

Until her scam is exposed in 2017 – and she ends up in prison. Prior the young woman financed her luxurious lifestyle by misleading not only wealthy acquaintances, but also banks and hotels. Thus, the fraudster was able to pay for her stay in a luxury suites in Manhattan for quite some time. But when the unpaid hotel bills piled up, Anna Sorokin was kicked out of several high-class hotels, and some of her friends also became suspicious because the young woman was not paying her debts – not long after, the false german heiress hit rock-bottom: in October 2017, Sorokin was arrested after months of investigation by the prosecutor’s office, among other things for grand theft, wire fraud, fraudulent credit applications and non-payment of bills.

Anna Delvey, that much we now know, is actually called Anna Sorokin, was born near Moscow in 1991, her father was a truck driver for a long time, worked his way up to become a transport entrepreneur and today sells climate-efficient heating technology. In 2007, the family moved to Eschweiler, Germany, near the Belgian border. Of course, there was never a trust fund, never a russian dynasty to heir and never endless amounts of money. Even though her parents supported their daughter for a long time, financing her studies in London, which she dropped out of, and internships, including at a lifestyle magazine in Paris.

The story of how a German-Russian girl hoodwinks the New York art and finance world, so obviously waving money around until no one wonders who this Anna really is, is made for a TV series that leads from one hotel foyer to another and from one pretentious party to the next exclusive cultural event. But why are we so fascinated by her story?

Because in the grand scheme of things, Sorokin is a criminal who stole from, lied to, and robbed people in a calculating (and yes, very smart) way.

Anna Delvey (or Anna Sorokin) is the living embodiment of „Gaslight – Gatekeep – Girlboss“.
The fascinating thing about con artists is how they actually get away with their scam for so long before someone starts looking behind the scenes, wondering about maxed-out credit cards and contradictory excuses, and putting one and one together. She flaunted so bluntly with luxury and bling-bling that it dazzled the people around her and they eventually only saw what they wanted to see – a young German trust-fund baby who would achieve greatness in the New York chic scene. One wanted to be friends with her, to receive her favor and to belong to her close circle, so as not to miss anything.

In Anna Sorokin’s life story, clothes were “part of the scam,” as the costume designers of Shonda Rimes’ Netflix series also point out. Anna Sorkin invented herself as Anna Delvey, with and thanks to clothes that were expensive enough for her to gain a foothold in New York’s high society, but that also didn’t raise any questions. She sent the right message.

In this way, fashion enables a social elite attitude, a hierarchy of values and a system of criteria whose validity is recognized within the framework of a particular group. Every wearer of clothing sends a nonverbal message that is read depending on the grouping. None of us can escape the power of fashion. And that’s what makes the topic of fashion so exciting. Fashion is more than just the superficial play with the beautiful things of this world. We communicate with it, we position ourselves with it, and we send messages. We all slip into a role as soon as we decide what to wear in front of the closet in the morning. Anna Sorokin chose the role of the german heiress and after all gained the anticipated fame in some way after all.