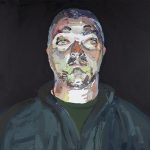 This column consists of creative pieces written by me. Some might be a continued story, some might be poetry, some might be short stories from start to finish. You never know what you might get so, be ready for anything. I think there are certain impressions and stigmas to what columns are supposed to be like, something sort of like Sex And The City. This column could be anything, which is the beauty of it. Today’s piece is a short story with themes like anxiety and fear at the forefront. The rest is left to the reader’s interpretation.

The concrete is scattered with impatient passengers and masked individuals. I can see it coming. I join them and cover my face. Only my eyes are visible to the public. Music in my ears channeling out the rest of the world. Now it’s just me. As I enter, I see seats forming an opportunity for gatherings that used to intrigued me but now I fear them. Thankfully, eleven pm on a weekday seems like ghost hours, clearing the train of crowds and leaving only a few hollow beings on blue cushions.

Then I see him. A tall, dark-haired, fair-skinned figure with a lost look in his eyes. Windows to nothing. I don’t dare to meet him in them. He’s fidgeting. Tapping his foot. Twirling his fingers. His eyes dart back and forth. He can’t sit still. His agitation tears him out of his seat and forces him to pace back and forth. A battle royale not open to the public. The automatic doors give him an opportunity to peak out and scan his surroundings, as though he’s being followed. His face is covered like everyone else’s, yet it feels like he’s hidden, more so than anyone else. He doesn’t want to be seen but makes his presence so apparent. Letting us know he’s there but not for long.

I can feel how uneasy he is. It creeps into my body and sets itself not giving me an opportunity to run. I start fidgeting. I tap my foot. I twirl my fingers. My eyes dart from the nervous creature to the dark window beside me back to the floor. He’s talking to me but no words come out. The air is thick with fear. I’m suffocating. Suddenly yet expectedly, the door opens, he exits, and it’s gone. I’m no longer afraid.

Today’s artist chosen for this piece is Ben Quilty, an Australian oil painter, and social commentator. I try to find paintings that evoke the feeling and atmosphere of my writing. The people Ben Quilty painted spoke to me.

“He places himself on the front line of some of life’s more atrocious atrocities so we don’t have to. Quilty bears witness to a plethora of society’s ills, speaking for those who have no voice, translating others suffering through the lens of his unaddressed privilege for a committed audience in middle Australia.” (Quilty: Sit Down Bitch. Be Humble., nattysolo.com)