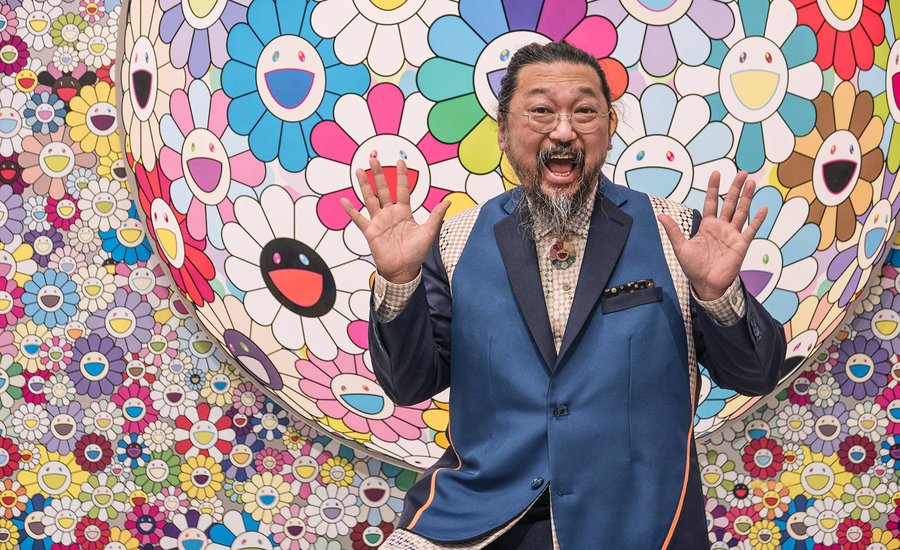 The works of Japanese artist Takashi Murakami have inspired both admiration and confusion.

His works are often decorated with smiling flowers, round, blinking eyes and colorful mushrooms. Breaking down numerous barriers, his creations defy traditional classifications.

Murakami blurs the line between so-called high art, which is mostly seen in museums and galleries and “low” art, like that seen in cartoons and advertisements.

These days Murakami employs a large staff of assistants who help him with his ideas and designs. Some of his works are extremely high priced creations intended for a gallery or art collectors, but he also mass produces merchandise, such as mugs, keychains, and T-shirts, which feature the characters he has created.

Born in Tokyo, Japan in 1962, Murakami grew up in a household that placed a high value on art. Japanese culture informed Murakami’s outlook but he was also exposed to some aspects of American life and popular US culture during a time when his father worked at an American naval base.

“Only recently I realize how much I’ve been influenced by Steven Spielberg,” Murakami told Interview magazine in 2001. “In his films, there is a tension between the children’s world and the adult’s world”. Murakami’s captures that exact tension with his cartoon-like images, sometimes displaying a dark and slightly creepy undertone.

In Japan, kawaii (Japanese for cute) has proven to be extremely popular, particularly with children and young adults. “There’s a cute culture in Japan that everyone knows about,” Murakami said of his art. “But without digging deeper, it’s hard to understand. It’s like Pop Art — if you can’t understand the consumer culture in America, you can’t understand it.” (maybe you can inert this quote here too) Japanese characters such as Pokémon and Hello Kitty are used to sell tremendous amounts of merchandise. The devotion to anime and manga and collecting related merchandise is shared by a large community of fans referred to as Otaku. That term, in combination with “pop”, for pop art, has resulted in a new term, “Poku”, which could be used perfectly to describe Murakami’s recognizable artworks.

Murakami’s best-known character is known as Mr. DOB, a mouselike creature with a round head and large circular ears. Mr. DOB has appeared in numerous artworks as well as on merchandise, such as mousepads, postcards, and T-shirts.

While Murakami established himself in the closer art circles in Japan and the United States by the beginning of the twenty-first century, it was his successful handbag design for Louis Vuitton in 2003 that made him a celebrity. He immediately gained rockstar like status, especially in Japan. Created in collaboration with then Creative Director Marc Jacobs, Murakami’s designs reinvigorated the stately luxury goods company, making Louis Vuitton bags the hot new must-have item for the wealthy and fashionable.

Pop artists are inspired by popular culture, choosing subjects from sources such as cartoons, billboard advertisements and consumer goods. Murakami who is often classified as a pop artist has achieved what only a few artists can: Earning the respect of many international artists  while also becoming hugely popular with the general public.

„We want to see the newest things.

That is because we want to see the future, even if only momentarily.

It is the moment in which, even if we don’t completely understand what we have glimpsed,

we are nonetheless touched by it. This is what we have come to call ART.“