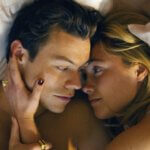 Olivia Wilde’s raised middle finger to the patriarchy isn’t quite the trainwreck that the disastrous press tour of this movie was – but it’s also nothing more than the epitome of average.
Even before its official release to the cinemas, the question right already isn’t whether you heard about “Don’t worry, Darling”, but what you heard about it: Did Harry Styles really spit on Chris Pine during the world premiere of the movie? Did the leading actress Florence Pugh deliberately sabotage the press conference due to “conflicting commitments”? The hype train for “Don’t worry, Darling” started to derail a few months earlier when director Olivia Wilde was served with the legal papers pertaining to her custody dispute with former partner Jason Sudeikis. On the public stage. During a presentation of the movie at CinemaCon.

It’s still unclear whether this was a vicious planned humiliation of her ex-partner, which she allegedly left for Harry Styles, whom she is or maybe was dating. The already barely controllable mechanisms of gossip were already out of control, and as it’s 2022 and every cultural event now requires at least five paragraphs of back story to have at least a bare minimum level of understanding of what’s going on, it became foggier and foggier for more and more potential viewers of “Don’t worry, Darling”, too. Most likely for you as well.

It’s almost impossible to overstate how much of a perfect storm this movie has been for gossip as well as the most poisoned parts of the internet. There’s Harry Styles dating the director and the director firing Shia LaBeouf in favor of Harry Styles.
There’s discussion around a pay gap between Florence Pugh and Harry Styles, stating that Styles got paid three times more than Pugh despite the fact she’s the main lead (which renders the “fuck you patriarchy” approach of the movie obsolete in real life). There’s the director telling during interviews that the Character of Chris Pine is based on Jordan Peterson and hovering above everything is a profound
misunderstanding on how Hollywood as a movie industry looks at fandom: Stan armies and online communities are perceived as free buzz-generating machines, but nobody does seem to understand that you can’t turn this machine off if it produces unwelcome results.

Johnny Depp’s legal team weaponized his stan army across Instagram and TikTok as the first prominent example that we are on the verge of a culture war where a new generation instinctively knows: No matter which side you are on and regardless of where you find yourself in the culture war – everything is content and every piece of content can be used as a weapon in this war.
It will continue to happen, and it will get weirder and wilder, as the hyper fixation of the stan armies and their long-living cultural memories won’t forgive and won’t forget.
It’s an irony of fate that the current battlefield of this cultural war is a largely forgettable movie.

For large parts, Don’t worry Darling feels like a complete rip-off of “The Stepford Wives” with some elements of “Pleasureville” and the unfulfilled promise of delivering the same captivating cinematography as “Greener Grass”, inconsistently intertwined with the Twitter sensibilities of 2022. Also set in dystopian suburbia and with a script not even close to being that clever or boundary-pushing as the constant striving direction tries so desperate to sell to the audience, “Don’t worry Darling” is the
epitome of average. Snatching ideas from other films without a deeper understanding how and why they worked in the first place doesn’t ruin the undeniable entertainment factor, but prevents the movie from living up to the hype:
Styles is playing a surprisingly dull and one-dimensional husband without any hidden depth, whose wife (played by Pugh) starts to question this misogynistic suburban paradise where hell is just one doorstep away. Beautifully shot and with perfect costume and production design, the surface of “Don’t worry, Darling” is polished and very stylish, but beneath it’s as hollow as the lives of its protagonists. In the early
’90s, this movie might have passed as mildly provocative, but its desperation for relevancy renders it into a poorly conceived psychological thriller that starts well, but is wrecked by a disastrous final act and a bizarre framing device that doesn’t get deep enough for its high concept.

But without the existence of “Don’t worry Darling”, the legitimate hopes would not exist that in a few years, a documentary about the filming and the impact of the humiliating press tour for everyone involved would help us to better understand how almost nobody cared for the movie. Still, almost everyone developed an unhealthy appetite for the gossip surrounding it.