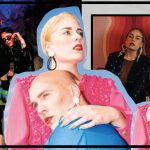 More Is More and This Is “Neue Deutsche Wahrheit”

More Is More and This Is “Neue Deutsche Wahrheit”

Whether in times of melancholy and dreariness, or when in the mood to dance, this pop-duo will definitely find your appreciation. V and P, two lovely people I met during my studies in Hamburg, are “Neue Deutsche Wahrheit” and offer a thrilling visual and auditory treat. Less is more does not apply to these two – NDW prefers opulence and celebrates pleasure with an excessive attitude. They combine dramatic German lyrics with the animating synthie sounds of the 80s and decadent visuals.

After their latest release “Don’t Leave Me”, we had the chance to interview the two and learn how Neue Deutsche Wahrheit works and plays. Enjoy!

TITLE: How and when did you start your band?
NDW: A little bit over two years ago, when we attended a friend’s release show together and started dreaming of becoming popstars and decided to just make it happen.

TITLE: How do you work together?

P: We’re calling each other like 20 times a day, discussing new ideas, presenting new pieces of lyrics which we both write, and, of course, talking about what we’ve been eating all day. And then we both have our main departments: I sometimes lock myself into my room for 12 hours to write new music and Vivi keeps coming up with all these brilliant ideas for video and photo shootings, which she also directs. When she said let’s have some twinkling shiny kick scooters for the “Don’t Leave Me” video and drive them around a gigantic Jenga tower I thought she was nuts. Turns out it was a stroke of genius.

TITLE: How would you describe your musical style? Which influences can be found in your musical and visual style?

NDW: Our music is drama-pop: we take influences from 80s synth-pop, French chansons, German travesty artists and many more.

TITLE: Talking about visuals: How important is fashion and expression for you?

NDW: Fashion IS expression to us. Clothing and make up allows you to influence the way other people see you and feel about you and we love to experiment with that.

TITLE: Who are your icons?
P: Grace Jones’ heavily aestheticized and ever changing appearance in terms of both music and fashion has left a mark on us. She’s a goddess. The way Gorillaz shift through all kinds of genres and collaborations has also been very important for the way I write music.

V: I feel drawn towards high-energy, extremely confident female popstars like Lady Gaga, Madonna and Lizzo. Their glitz and glam is irresistible to me. We’re also still mourning the deaths of George Michael, David Bowie and Prince who have always stepped outside boundaries and all created art that felt wonderfully true.

TITLE: Why did you decide to perform in German?

NDW: We aim for a specific tone in our lyrics: We want it bitter-sweet, melancholic and romantic. For this style of lyrics, the German language has such beautiful words in store. Writing songs in English is mostly the first option for bands. But we feel our native language allows us to express ourselves in a much more natural, free and precise way.

TITLE: Where would you like to see yourselves in five years?
NDW: On top of the Billboard charts.

TITLE: How is the current situation affecting your work? Do you have any advice for musicians and artists?

NDW: We were very lucky this year. Although our shows were cancelled we still managed to be productive. We’re currently building up to our new EP, with two singles and videos (Exzess/ Don’t Leave Me) already released. But so many artists and bands are in deep trouble right now, which is why we should continue supporting, connecting and donating. We can recommend to get in touch with local support communities to receive professional help. In Hamburg, the RockCity team is working nonstop to help the local scene and always tries to find solutions for your individual issues. We love them!

TITLE: Where do you find inspiration?

NDW: We try to indulge in as many creative works as we can. Rina Sawajama and Lady Gaga released some STUNNING music videos this year. Lately, we just can’t get enough of Ingmar Bergman films. The pictures, narratives and scenery he creates definitely strike a chord in us.

TITLE: If you could collaborate with one artist (no matter dead or alive) who would it be?

TITLE: What does true identity mean to you? Have you found it yet, and if so, how would you describe it?

NDW: We don’t think there is something like the one true identity. We love working together in a band because for us it is a space where we can get to know new facets of our identity and try out things we’ve never done before. Identity is fluid, it’s constantly changing and it’s fun to play around with it rather than trying to manifest a solid, rock-hard core within ourselves.

TITLE: A few weeks ago, you released your music video for your song “Don’t Leave Me”, what is your favorite part about it?
V: This song means a lot to me because it helped me to heavily reflect on sexuality, intimacy and romance. I was in an ecstatic place when I wrote the lyrics while riding the train from Berlin back to Hamburg last summer. When coming up with ideas for the video, we just let our fantasy run wild and realized that we can basically make everything imaginable happen when we have the support of our amazing friends – even a giant Jenga tower.