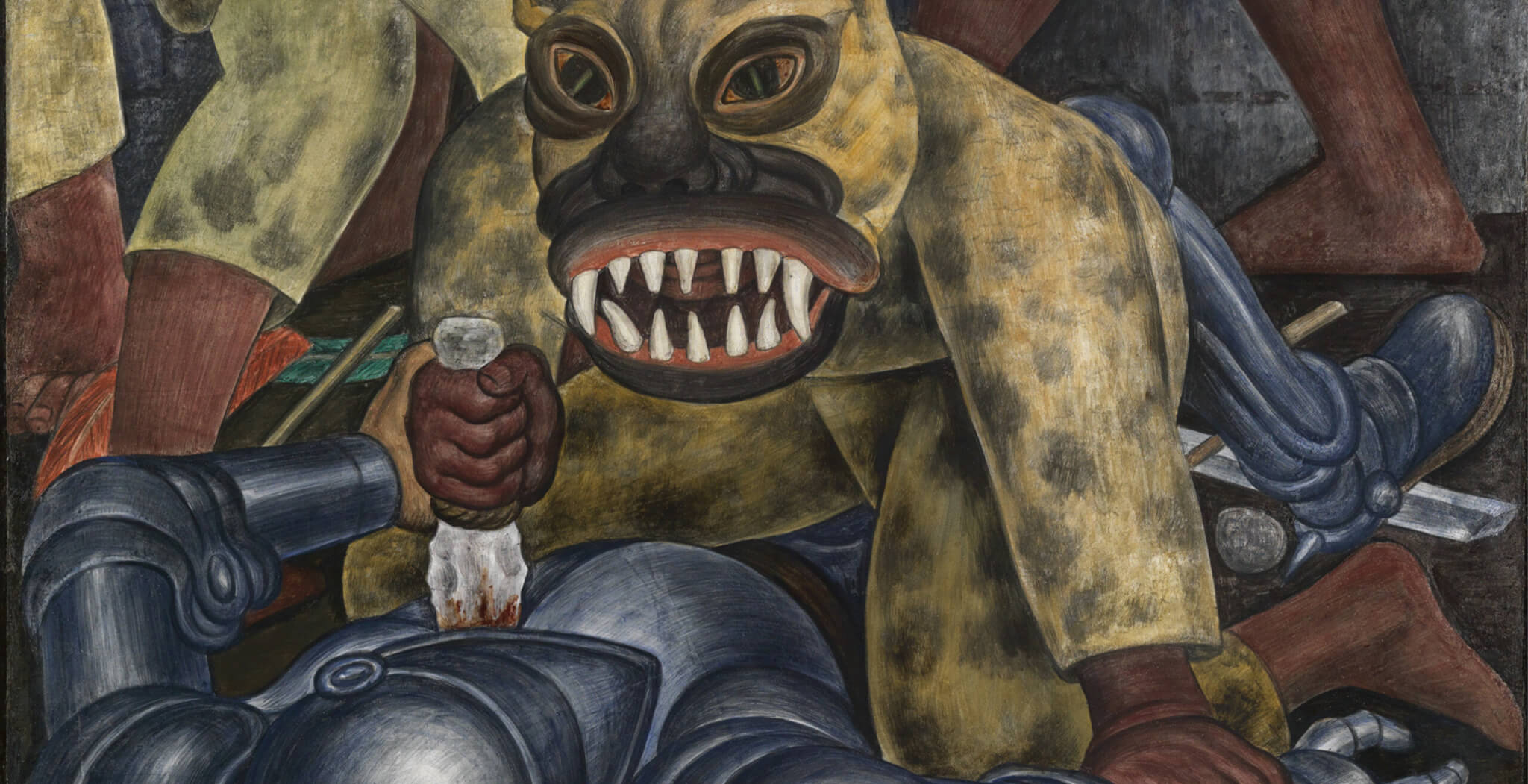 “HUNDREDS OF YEARS OF SOLITUDE”

Yesterday Hispanic Heritage Month ended. It might sound funny, that this article dealing with this topic releases when it just ended, but let us say that I needed the last 30 days to reminisce about my identity, my family’s history and the beautiful, but more than sad story of my people.

Before we start let me apologize. It is not possible to write anything in the extent of an article like this that gives justice to the topic of Hispanic heritage in general. This will be a personal text with some historical facts here and there.

The land where my people originated was “discovered“ in 1492, when Columbus first set foot into the Americas, ready to take what was not his.

In 1519 Spanish conquistadores under Hernán Cortés started their campaign to overthrow the Aztecs and in 1531 Francisco Pizarro, an illiterate pig farmer, started his conquest of the Incan empire.

The spaniards did not come empty handed. They brought diseases and hate.

They forced my people into a new religion, gave them a new language, destroyed everything that was sacred to us, took all our gold and enslaved our people.

Since last year I have seen quite a few (but still not enough) videos of angry protestors tearing down colonist/racist statues and I loved every second of it.

Columbus, Cortés and Pizarro and the likes are not to be honored, but to be despised for their integral part in destroying a continent that has been populated for as long as 30,000 years and was home to advanced civilizations like Olmecs, Maya and the aforementioned. I hope that one day the history books will tell the real story.

My father came to Germany in 1968 to study at the University of Kiel, the city where he also met my mother and fell in love with her. Four beautiful “mix-raced“ children followed over the years with me being the last one in 1987.

He himself was born in the city of Machachi in Ecuador, a land that was once under Inca rule. Before the Spaniards arrived the Incan empire stretched over Peru, Ecuador, Bolivia, parts of Argentina, Chile and Columbia.

Before they were forced to speak Spanish, my people spoke Quechua, had extraordinary architecture (Have you ever seen Machu Picchu?), roads that connected all parts of the empire, were skilled in textile works and used agricultural innovations, that nobody else was skilled enough to achieve.

They prayed to Pachamama, the mother of the Earth and to her children – Inti the sun god and Mama Killa the moon goddess.

After starting their family in Kiel with stops in Berlin and a couple of other cities, my family settled down in a small town in North-Rhine Westphalia, where I grew up.

My father worked very hard to give all of us children a life that people of our origin don’t have that often. I never really talked to him about everything he experienced when he first came to Germany.

I heard about a lot that happened to him, how he and my mother were treated but some people just hold everything to themselves and decide to stay strong and silent.

For the first years of my life I just felt happy and enjoyed the traditional artworks hanging in our home and our occasional travels to Ecuador every few years. But at the end of the day I felt pretty German. Why shouldn’t I?

When I left grade school and soon thereafter puberty hit everything changed.

With my body suddenly transforming, my nose started growing and my native facial features started popping up. Have you ever seen a werewolf movie? The transformation at full moon?

That is what happened to me, but instead of overflowing facial hair, cheekbones and our people’s typical nose showed up. I love my features btw. I don’t know if nobody noticed before, but maybe it was just me as a child being too naive to realize I was “different“.

The other students of course took notice and gave their best to let me feel that.

Even though my idiot teachers did not see any racism I was mocked often pretty soon. I know they saw it and I know they agreed with it.

Hispanic Heritage Month started in 1988 in the US, but never mattered where we grew up, so it was up to me to take care of our heritage.

As a Latino you did not have anybody to hold your back in times like that in my hometown.

There were other minorities of course and they had communities and I envied them for having each other. But for me being a descended of Pachamama I was on my own. I just felt lonely.

My brother who introduced me to music, movies and basically everything that made me who I am had moved abroad to study when I was a teenager, so I really was on my own this time.

I became a student of my own and did my best to teach me everything about my heritage.

I studied music, movies, history, basically everything I was able to get my hands on.

First it was movies like “Bound by Honor“ (“Blood in – Blood out“ in Germany) or rap music like Kid Frost’s classic “La Raza“.

A couple of years ago I met Mexican-American photographer Estevan Oriol (Check out “LA Originals“, a Netflix documentary about him and his partner, the legendary tattoo artist Mr. Cartoon). His photos and the music videos he directed ooze latin flavor and culture. And he helped me not to feel alone. That is what I told him when we met and he understood.

Speaking of art I recommend the incredible murals of Diego Rivera (and of course every work his wife Frida Kahlo ever did). One of his most famous works “Dreams of a Sunday Afternoon in Alameda Park“ depicts some of the most famous people and events of Mexican history including Frida Kahlo, Antonio Lopez de Santa Anna, Jose Marti and another one of my favorite artists Jose Guadalupe de Posada. You could stare at it for hours.

Another one of his most famous works is “Indian Warrior“ which you can see as this articles header. It depicts an Aztec warrior wearing the costume of a jaguar stabbing a Spanish conquistador. Unbelievable…

I was lucky enough for my brother not locking his door, so I could have a look at his literature, too.

Our continent is too rich of stories that need to be told, but like I said here is not enough space to tell you the story of how Símon Bolívar let Venezuela, Bolivia, Colombia, Ecuador, Peru and Panama to independence from the Spanish empire, the story of Manuela Saenz, the woman he loved and fought at his side,

about how Tupac Amaru II (Guess where Pac got his name from…) let a revolt to free his people, about the Cuban revolution, about the sad story of Chile, who’s socialist president Salvador Allende was killed in 1973 and replaced by a fascist dictator named Augusto Pinochet. Under Pinochet’s rule more than 30,000 people were tortured for political reasons and thousands were killed or simply “disappeared“.

Have you heard about the Zoot Suit Riots? Have you heard about Operation Condor, the United States-backed military campaign of terror by several right-wing South American leaders? How the continent is still drained of its resources, while the population is still suffering?

There is a song by rap artist Immortal Technique called “Peruvian Coke“ which deals with the drug trade starting on the coca plantations in Bolivia.

He raps “The spirit of my people is starving, broken and sweaty/ Dreaming about revolution looking at my machete“. That is heartbreaking. But it is the truth.

In my father’s book cabinet I came across a book by Colombian author Gabriel García Márquez named “One Hundred Years of Solitude“ that is hailed as “the first part of literature since the Book of Genesis that should be required reading for the entire human race“. It is part of the genre of magical realism.

Magical realism often blurs the lines between fantasy and reality.

Just like the stories my family in Ecuador often told us. Spirits birthed in ancient believes exist for them and are omnipresent, even though for hundreds of years they were forced to believe in the bible.

The book’s plot tells the story of the fictional town of Macondo and the different generations of the Buendía family, whose patriarch founded it. It is said the book has been created by Latin culture to understand itself. The fictional town that is the center of the book is a replacement for the whole continent with a lot of plot points directly mirroring the history of South America. It is a must read for everybody and the one piece of media mentioned in this text I recommend the most.

Latin or Hispanic history is too big of a topic to celebrate for just one month. Same with Black History Month. History books might tell you how “people have been discovered“ and degrades entire civilizations to just footnotes of world history or even tries to erase them from the world’s memory.

My whole life I tried to absorb every information I could get my hands on to be part of a culture that originated around 6,000 miles from where I was born. There will never be a point when I will be finished with my journey. The spirit of thousands of years of struggle, pain, pride and beauty will forever be with me.

Ernesto “Che“ Guevara, that I can’t withheld from you before I finish this text.

I had a brother

we never saw each other

but that did not matter.

I had a brother

who walked around the mountains

while I was sleeping.

I loved him in my own way,

I drank his voice

I walked from time to time

We never saw each other

but it didn’t matter,

my brother was awake

while I was sleeping.

My brother showing me

from behind the night

This is the spirit I was talking about. The spirit that people tried to break for 529 years since Columbus first set foot in our home. The spirit that also lives in my father, my brother and future generations to come. We might feel alone, but our brother will always be with us.

Even though we don’t see each other, we will never be alone.

And even though I often felt alone, I now know that I never was.