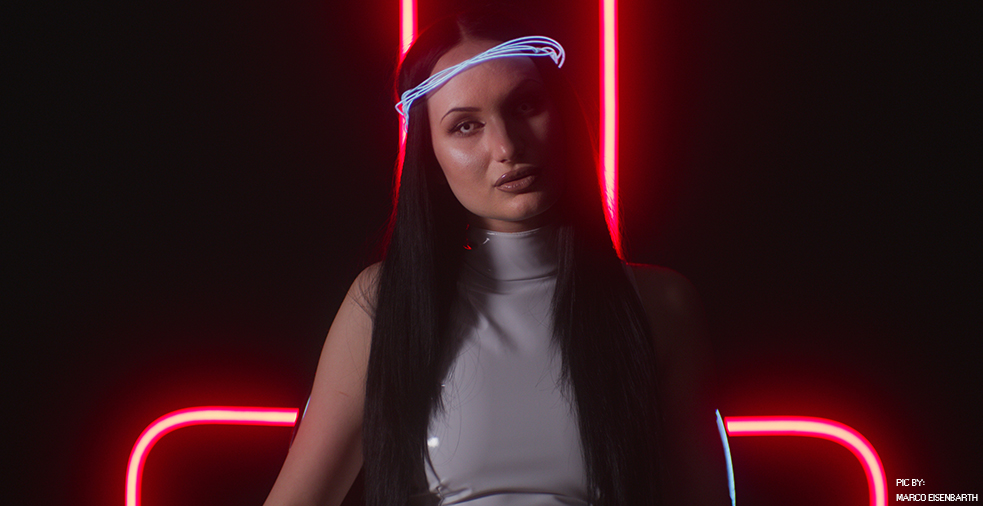 The singer and songwriter Lexy Lavey from Frankfurt/ Main is an artistic persona. She describes herself as “Shock Pop’s Finest” and thus defines her very own music genre. Lexy plays with various influences from pop and subcultures and mixes up the opposites.

Title: Tell me something about your latest single Lamborghini.

Lexy: It came out on December 13th, coincidentally even Friday the 13th. That was not planned. It’s a song about breaking up basically. I wanted to use the fastest, most expensive and most exclusive object, because the Lamborghini in the song is symbolic for me. I’m not a fan of fast cars at all, but I think it’s funny to use it as a metaphor.

Title: In your first music video Blasphemy, you use some provocative anti-Christian symbols. How did people react to it?

Lexy: I would say the reactions were 50/50. Some didn’t even mind because they understood that this was about the artistic persona Lexy. Well, and the other… (she laughs) weren’t amused. I got some negative reactions from strangers on the internet. For example, they asked me if I have anything to do with the Illuminati. I think that’s totally weird.

Title: How was your family’s reaction?

Lexy: My parents love it because they understand that it is about Image, marketing and art. They really support me.

Title: So, it’s all just image– or is there a spark of conviction behind the aesthetics?

Lexy: Most of it is pure aesthetics. The reason I used the upside-down cross in my Blasphemy video is because the song is called Blasphemy. And the song has absolutely nothing to do with religion.  I used the cross, because I knew it would upset people. It’s just too easy to shock them.  In the beginning I was even afraid that my video might be too boring and mediocre that nobody would react to it. Artists like Marilyn Manson or Ozzy Osborne have often used those kind of symbols (or something similar). But it still works! For me, the shock factor of my video is zero.

Title: When you created Lexy, you used a lot of influences from pop and subcultures. What inspired you most for this?

Lexy: The two artists that inspire me the most are Marilyn Manson and Britney Spears. I know that’s very contrary, but that’s exactly what I am. It’s a bit of a split personality. I’ve always said in the past that my two personalities are fighting inside. Today they are just trying to exist side by side. I also mix these influences because something was missing for me in the music scene. Most of it is either too Goth or too Pop for my taste. I was always looking for a good mix of these two, but I never really found it. So, I just decided to do it myself.

Title: You have a huge tattoo of the Mother of God on your upper body. What is the story behind it?

Lexy: It’s a painting by my favorite artist Kevin Llewellyn. The tattoo artist Carlos Torres from Los Angeles was visiting the Frankfurt Tattoo Convention. I had my first session there and then flew out to L.A. for the second session. Torres is quite well known in the scene and a very pleasant guy.

Title: Do you think some people feel intimidated by you?

Lexy: There is a funny tweet that went viral a few months ago: It was about a girl and her friend who went out together. A guy came over to her and said: “You look so intimidating” – and her friend replied to him: “Is she intimidating or are you just intimidated?” I think that fits my persona pretty well.

Title: You call yourself “Shock Pop’s Finest”. What’s it all about?

Lexy: As I said, my biggest influences are Marylin Manson and Britney Spears or Slipknot and Lana Del Rey. These are all artists who don’t really go together. Marylin Manson’s genre is called Shock Rock – so I just used it and turned it into Shock Pop because there is an obvious pop influence in my music. And I call myself “Shock Pop’s Finest” because there is no one else in the genre except me. (She laughs out loud)

Title: You often practice Tarot. How did you get in touch with it and what is Tarot for you?

Lexy: I actually grew up with it. My mother and my aunt did this very often when I was a little child. When I was a teen, however, I found it totally stupid and distanced myself from it. But I’ve recently rediscovered it. Tarot is a kind of tool for answering questions and better focusing on certain things. It’s not to look into the future as many people think. It’s more like a support.

Title: You grew up religiously and attended a Catholic girls’ school. How does that affect your work?

Lexy: If I hadn’t been raised Catholic, Lexy wouldn’t exist. I didn’t become what my parents or grandparents would have liked, but that’s probably because they always pushed me too much in one direction. In the end, I was just a rebellious teenager who didn’t want to fit in.

Title: What do you like about the Gothic scene?

Lexy: I find it inspiring. I also love Goth boys (she smiles) and of course the music: Metal, Goth Rock and Industrial for example. And as you can see, I wear a lot of black. But I wouldn’t describe myself as a goth girl.

Title: What does the color black mean to you?

Lexy: I just feel comfortable in it. I think it’s a very kind color. It suits everyone and looks very minimalistic and elegant. You simply can’t go wrong with black.

Lexy Lavey’s new single Lamborghini can be found on all popular streaming platforms.