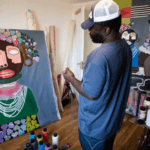 At first glance, Kojo Marfo´s art pieces are amusing, funny, and light. At second, they tell stories that are stretched over continents, centuries and go right under your skin. Without losing their lightness, the big heads made out of simple shapes, the shining cloth, and bright colors showcase the beauty woven into Africa’s social and geographical fabric. Mafro uses techniques of traditional Akan art to highlight social issues, such as inequalities, religion, politics, and spiritualism.

Kojo Marfo was born and raised in Ghana, in Kwahu, and moved to Accra around the age of eight. He enrolled in successive art courses at the University of Ghana, New York University, and Central Saint Martins in London with the intention of studying African art and textiles. But studying art at university did not quite work for him. The structures of learning seemed too inflexible, the institutions – although being spread all over the world- too similar. Marfo decided to learn and develop his artistic practice on his own terms. Because he has lived in so many places and has also traveled a lot, each art piece of him appears to be a careful patchwork of different continents and different cultures. Here, a Renaissance ruff collar from Britain, there, some sacred cows from India, next to fertility dolls from Ghana.

He describes himself as something of a chameleon, fitting seamlessly into the environments he has chosen to inhabit. “My host nation has always been a good host. I address my work as ‘cultural hybridity,’ because I have been to so many countries. I’ve absorbed them.”

As a young man, he read about how Pablo Picasso had studied African art. It was the realization that the great Spanish artist had been influenced by artifacts and masks that existed on the continent that inspired Marfo to pursue his artistic dreams.

Marfo likes to see himself as the strange guy. The one, who likes to absorb a situation, before he interacts with it. Someone who likes to watch, to ingest his surroundings and the people close to him. He likes to find the funny, the absurd in people’s stories and behaviors.

Constructing a bridge between the heavy and light, the funny and serious, he wants to create “symbols, for everyone to relate to”  as well as establishing a reflection of the Akan culture and his own struggles living in the West.

“No matter what you are going through, or where you live, I want my art to help people think and reflect on their inner lives and how it relates to the wider world.