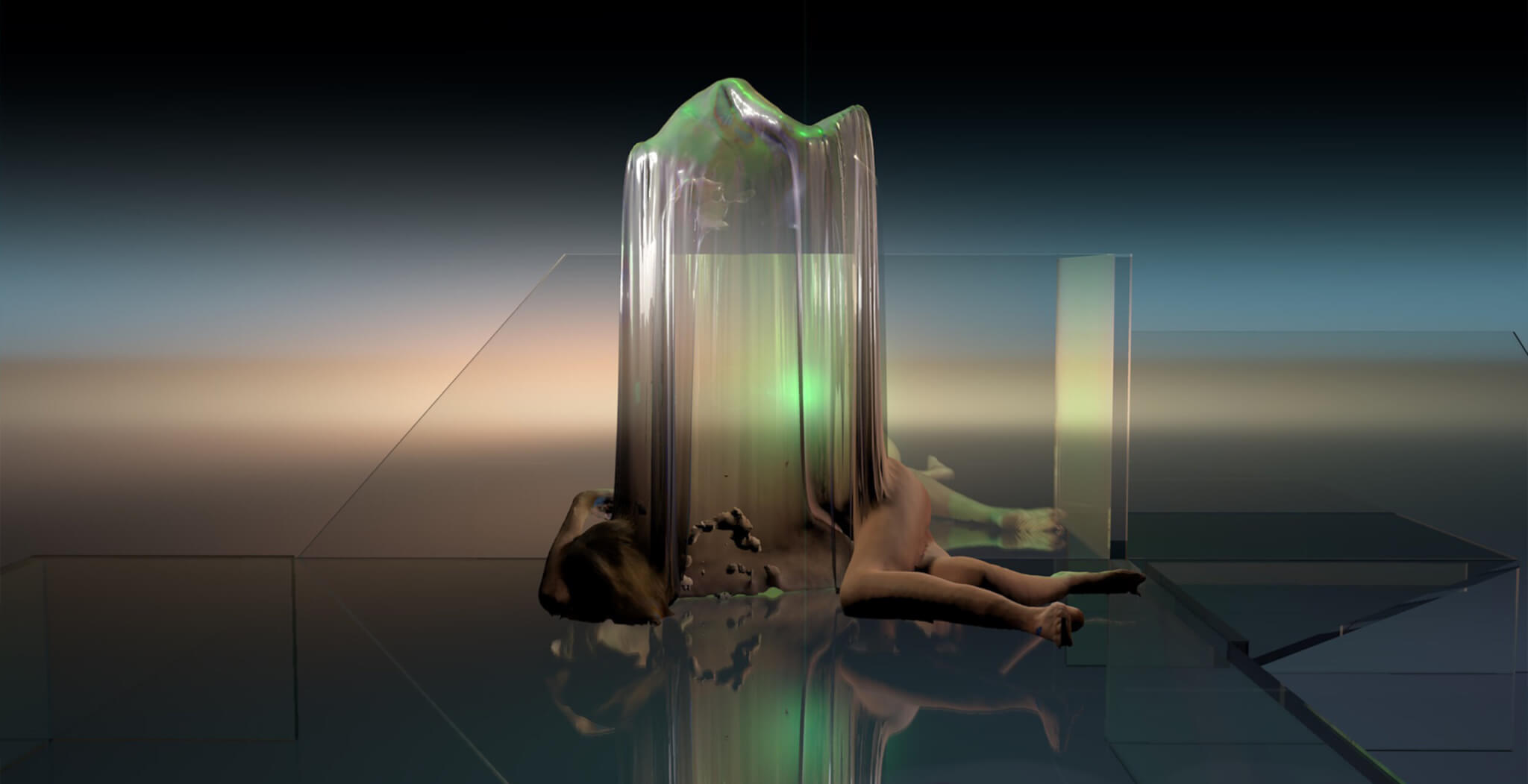 Finding Authentic Multiplicity in the Film Series of ‘Jump Cut’

Finding Authentic Multiplicity in the Film Series of ‘Jump Cut’

While our cognitive ability allows us to travel back to memories, make projections for the future, lure in fantasies, and imagine non-existing landscapes and situations, digital technologies are rendering visual registrations of alternate worlds. Jump Cut, a series of six episodes curated by Dana Gingras of Animals of Distinction, and recently exhibited at the CTM Festival in Berlin, addresses the relation between space and body, or as Gingras mentions, “bodies that inhabit spaces, and spaces that inhabit bodies.”

These digital environments reform not only the world we inhabit — its topical elements, textures, composition, rhythm — but the criteria that define concepts of space, time, and body, and the way they interrelate. In the second episode of the series (Jump Cut #2), the body is presented as a living sculpture: 3D scanning techniques disassemble the body to the rhythmic twitches of electronic musician Marie Davidson. While the human body becomes an instrument for ongoing deconstruction, reconstruction and transformation, space and time enact notions on their own, too, inviting viewers to be intuitive about their dimensions and delimitations.

As these spaces follow their own rhythms, new intuitions and illusions narrate the reasoning for the existence and qualities of the elements that inhabit them. That is to say, since they are empty spaces, free from caged-like structures, they foster environments in which endless formulas allow for authentic multiplicity, through digital manifestations.

But not only digital spaces that are dissociated from our immediate reality are fierce in overthrowing power structures. In “Them,” the third instalment of the series, mainstream spaces are subverted by behaviour codes that menace the established social order when three drag stars take over popular streets of Hollywood. The dynamic and changeable elements in this episode ironically juxtapose the values and identities of stigmatised communities against those of the dominant sphere. By disrupting the social hierarchy and ownership of spaces, drag stars take control over the narrative and introduce an autonomous language.

By presenting dissonant, unfamiliar spaces, the body’s response is automatically directed to building an architecture to mediate genuine conversations with the environment they are exposed to. In creating new connections to the space, identities come into question, seeking to redefine themselves, too. Artists can create experiences of the conscious and unconscious, and transfer the power of an idea into something visible to the senses, such as abstract conversations between identity and space.

In that way, as digital technologies have the power to create split narratives that speak of possible, multiple realities, these narratives become spaces for constructing and confirming our identity. In projecting different versions of ourselves onto those spaces, we legitimise ourselves through multiple temporalities and validate the transformative layers of our corporeal and non-corporeal.

Alternate narratives allow us to not only create but consume more spaces, experiences and identities — and aren’t digital tools nascent to late capitalism, where consumption realizes the authenticity of the self, through much-urged self-exploration? These parallel realities, then, are a product of ownership — along with the different selves we produce for those temporalities and their interchangeable values — as they grant us control over the corporeal and the multifold representations of it. In these spaces, we can become living sculptures, dominant identities, and bodies that extend across time and space, among many others.

The last episode of the series (Jump Cut #6) presents an intuitive search for abstract meanings: a lyrical dance between human and nonhuman agencies that not only transgresses physical boundaries but conjures an environment where all its elements are highly emotionally charged. Here the space inhabits the body: it imbues every living and inanimate body with grace and spirit, a never-ending ceremony where past, present and future are constantly shifting, reinventing and nullifying one another.

In the episode, the relation subject-object sits at the tension of ownership. Can we really own the elements of a space, and the space itself? Or is the space the owner of the narratives, and therefore the bodies, that there can come to exist?

While the shift between physical and digital realities seems like some sort of dystopia for some, the opportunity to surpass powerful institutions and dominant social structures via alternate worlds is a source of hope for others. With digital representations, intricacies of time and space consciousness are revealed, and so is the delimitation of selfhood.