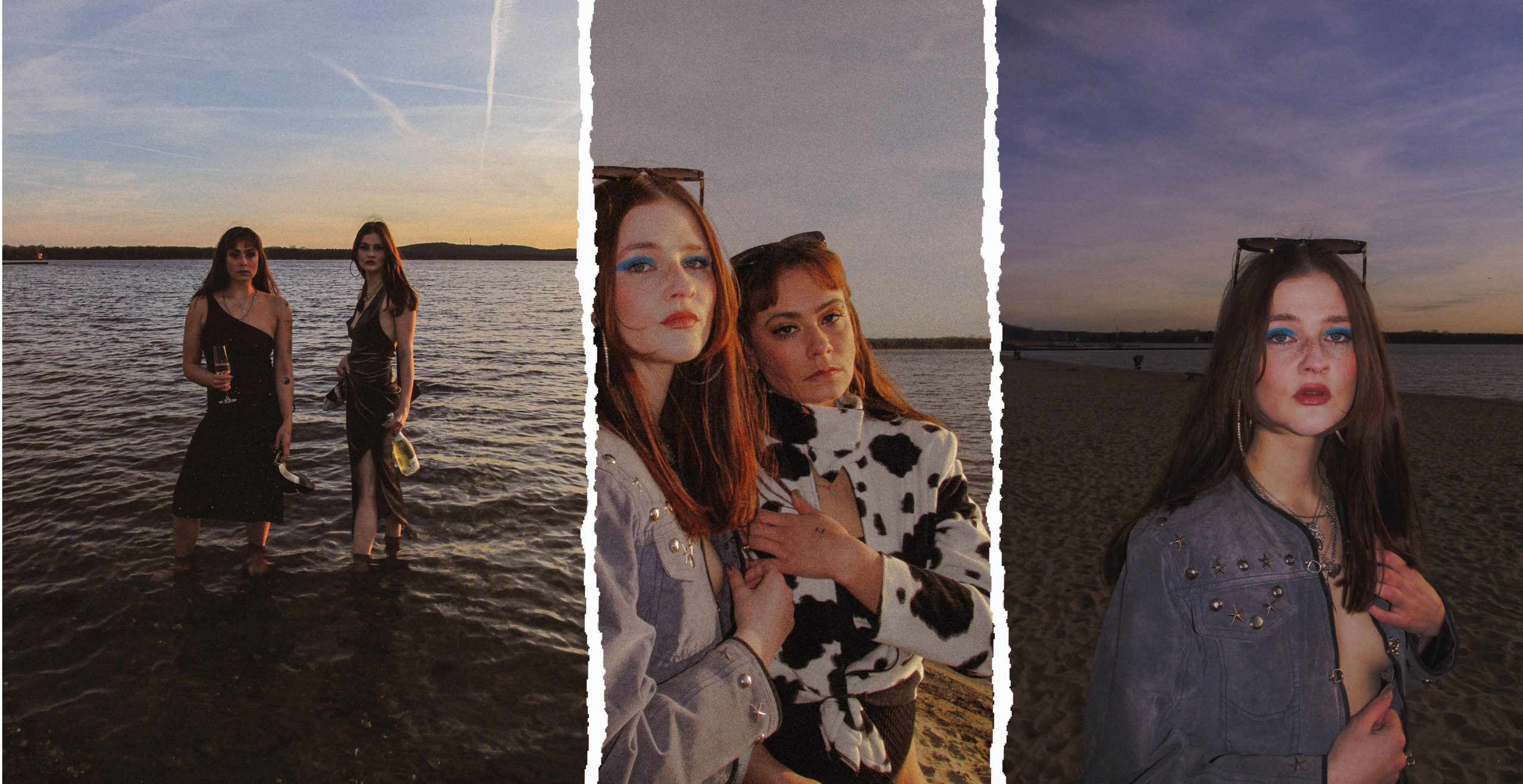 Our favourite girl band CYBER tell us more about what’s behind their bittersweet new album called “VACATION”, why it makes no sense not to believe in zodiac signs and how best to achieve golden tipsiness in times of social isolation.

How is the quarantine going?

Jóhanna: It’s going well, we’re trying to keep busy. But it’s also hard, I’ve been quite depressed just because of this constant pressure that you have to be doing something. Especially in the art world, there are a lot of open calls for “covid art” and stuff like that. That’s why I have a lot of anxiety about not producing or being productive enough. It has been a lesson in self love and trying not to hate myself which is a challenge every day.

Salka: It’s been a bit different for me. I haven’t necessarily put a lot of pressure on myself to be productive, but for the majority of the quarantine I’ve felt pretty productive anyways. I’ve also felt more energetic, just because I’m used to having maybe a bit too much to do. I usually have four jobs and now I have just two jobs, you know? It’s a nice reminder for me that I feel more mentally stable when I don’t have too much to do. It’s been kind of an eye-opening experience for me.

Jóhanna: I’ve just been drinking beer. I strive to get that golden state of tipsiness – so for me its three big beers and a bit of chewing tobacco. That way I’m perfectly tipsy and get that sweet sweet nicotine buzz but dont wake up with a hangover.

Salka: I usually just have a hard time mixing cocktails myself. The other day we went to a local bar that sells pre made cocktails in bottles out of their window (we got a delicious whiskey sour type of drink). I think it is such a good idea, it’s so nice to be able to support the small local businesses around you in these weird times.

Your latest single “starry night” takes place at a fictional beach club. Can you tell me more about that story behind?

Jóhanna: The whole album happens In an imaginary vacation place, we’re staying at this hotel called Pink House Palladino. It’s a big pink castle like hotel, with a white beach and clear blue water. Starry Night takes place in a beach club close to the hotel, maybe five minutes away but we still take a taxi because we’re wearing high heels. We’re in a cheap holiday area maybe like Costa del Sol in Spain, Sunny beach in Bulgaria or you know just like something out of your families early late 90’s early 00’s summer vacay. So yeah, in the club it’s all dark and sweaty and there are lots of hot people.

Salka: The idea of these characters and the location represents a form of escape. Everything feels at the same time so familiar but yet so far away, that it’s a sort of an alternative reality. It’s also somewhat about pretending to feel amazing and great but the same time you’re checking your phone every two seconds and you’re actually lost and anxious (both in the club and in your life).

Don’t you think that it’s kind of ironic to be making an album called “VACATION” during this time?

We’ve had this idea since we were recording our last album “BIZNESS”, we originally wanted to do a “CRUISE” album where we would be on a huge cruise ship but it kind of organically turned into more of a beach vibe so “VACATION” it became. We started working on it in late december, early january, then obviously the corona crash came. It’s quite ironic that we are making a vacation album in the current situation of the world, but In a way because it’s also about mental escape it’s kind of the perfect time to be working on it. And when this is all over I can imagine a lot of people will really want to get away from their surroundings, if they can. And some people will definitely go straight on some kind of vacation after this crazy lockdown. But it’s also going to be an interesting time, when we finally get to live our lives again, properly – it will be so weird. The album’s undertone is also that feeling of being on vacation but knowing you have to go back to the stress and speed of everyday life, so this will actually be the perfect album for that vacation after all the isolation.

Will there be a music video for “starry night” and what will it look like?

For “starry night” we really want to create an environment where you see people dancing and crying at the club. We are going to wait until this whole quarantine situation is over because we need a proper location and a proper crew for the idea we have. But before that happens, we will be releasing another music video for a different song off the album “breakfast buffet”. Which we will be making during the quarantine. As the name implies, you will be seeing alot of food and brunch cocktails, a bit of an easier theme to manage in the lock down situation.

Do you plan some live streamed performances?

Maybe not performances but we might do some Q&A stuff and we will definitely be giving people a bit more of us, just in everyday context and some behind the scenes stuff from the studio. We feel like we are all a lot more thirsty for connection right now as humans in general. So we would just like to get more personal with our friends and viewers. There are also so many livestream concerts going  on right now and for some artist they really work, but I think for us we would always be obsessing over the sound and it can also be very strange to see an artist perform without any physical audience – without getting any feedback. This whole energy makes it to a very different performance, which might suit some artists, but we just don’t think it’s our type of mood atm.

You recently did a horoscope special on your Instagram story. How strong do you believe in it?

It was so much fun to write it, because we just took the most obvious characteristics of our friends compared to their zodiacs and then tried to create stereotypical horoscopes out of that.

Salka: I do believe that the planets and the stars have an effect on us, because it wouldn’t make sense if giant fucking planets did not have any effect on us tinycreatures. But I also think that some people identify a bit too much with it, usually because they have known their sign since an early age and when you’re constantly compared to some aspects of that sign, It’s really easy to start to mold your personality around what is expected of the zodiac sign. But you know it’s whatever, in the end I just really like to be the stereotypical white horoscope girlie girl.

Jóhanna: I never completely felt like a Gemini, but like two years ago I saw an article on Solange’s insta story about the cusp of Magic (the cusp of Gemini and Cancer, between June 18 and June 24). So I’m born on the 20th of June and I had never fkn ever read anything that was so spot on! After that I kind of read horoscopes for both Gemini and Cancer and kind of puzzle together what I feel suits me best. hehehe I know its kinda breaking the rules, but whatever. I also use some apps like co-star and pattern.

How are you dealing with panic attacks and anxiety during this time?

Jóhanna: I’ve been doing a lot of breathing exercises, following a home gym program and trying to meditate. But some days I just can’t get out of bed, I had two good days in a row now but before that there were a few horrible days. For me, I have to set really clear boundaries both with other people and with myself so these days I make sure to let Salka know how I feel before we start working, because being this sensitive can be a lot to handle and sometimes the smallest things just tip me over.

Salka: I am usually working a lot and in that state I just manage to stay in the flow or in the hamster wheel etc. But then when I have a day off or there is less to do that’s when the anxiety kicks in, on those days I usually just lay in bed all day and watch a ton of movies, get home delivery and ask my boyfriend to bring me ice cream and shit. This situation usually comes more from a place of anxiety rather than exhaustion. Exhaustion you can kind of respect but I’ve had a hard time respecting the state of anxiety and mostly just shamed myself for it. My way of getting out of feeling anxious is just by doing more and more small tasks like making lunch (or doing a load of laundry), congratulating myself for those things and then exercising. I think exercising is such a key element – I really don’t think people should be considering medication before they have tried exercising in a way that suits them.

Sometimes there are just days where you can’t get out of bed. At those days, just let it happen. Don’t fight them because you will probably just get more anxious, also those days won’t really be productive anyway, so just give into it. Just try to do tiny things to make yourself feel better and don’t shame yourself if the only thing you can do is watch 20 episodes of some shitty-tv show. <3 <3 <3