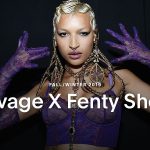 Why the Fenty x Savage Show is Worth the Watch

Why the Fenty x Savage Show is Worth the Watch

I remember back in middle school the Victoria’s Secret Fashion Show was the highlight of the year for many classmates of mine. Girls would all meet up and watch it together and it was all the buzz the next day at school. Personally, I never participated, not out of rebellion, but just because I was never invited. One night, laying at home in bed, just out of curiosity I watched 30 minutes of a show by myself. Although the performances were pretty good overall the barely clad models made me feel two things: fat, and ugly. You can bet that I never watched another one again.

Since then a lot has changed. Generally, beauty ideals are progressing away from your average skinny white girl and moved into a more inclusive area. Another thing that’s changed is that Rihanna has expanded from being just an amazing singer to becoming a fully-fledged, killer businesswoman with big ideas.

Although she hasn’t blessed us with a new album since 2016, Rihanna’s been blessing us in every other way imaginable. From makeup to fashion, and lingerie, she’s been disrupting industries and never disappoints. Savage x Fenty is unique because according to Rihanna “it was created for the female gaze, not the male”. In September at the New York Fashion Show she debuted her latest installment of the Savage x Fenty lingerie collection. After last year’s show, we knew only to expect great things, but this somehow managed to surpass all imagination.

Models and celebrities such as a Cara Delevigne, Laverne Cox, Bella and Gigi Hadid adorned the runway lightly clad in the clothes from the new collection. The choreography of the walk was a beautiful play of shapes and colors and the soundtrack was an eclectic mix between heavy electronic beats, some hip-hop, and even a snippet of Bach’s Mass in B Minor.

The lineup included performances from A$AP Ferg, Migos, Big Sean, Tierra Whack, Fat Joe, Normani, Fabolous, and Halsey. The show was a blend of music, dancing, and fashion, combining these three in a way never done before. From the choreography, to the music, to the set design everything is just perfect.

Another thing that is remarkable about the show is its inclusivity about which Rihanna said “I’m looking for unique characteristics that aren’t usually highlighted in the world of fashion as it pertains to lingerie and what society sees as sexy”. And all the models looked so fierce doing their thing

The show was about celebrating women of all different shapes and sizes, owning their bodies and their beauty. It was definitely the most inclusive and extravagant fashion show of all times and Rihanna naturally raised the bar for all fashion shows to come.

If you feel like having a night in this weekend and have some time to spare, I wholeheartedly suggest you watch this on Amazon Prime and together we can gleefully celebrate the glorious downfall of Victoria’s Secret.