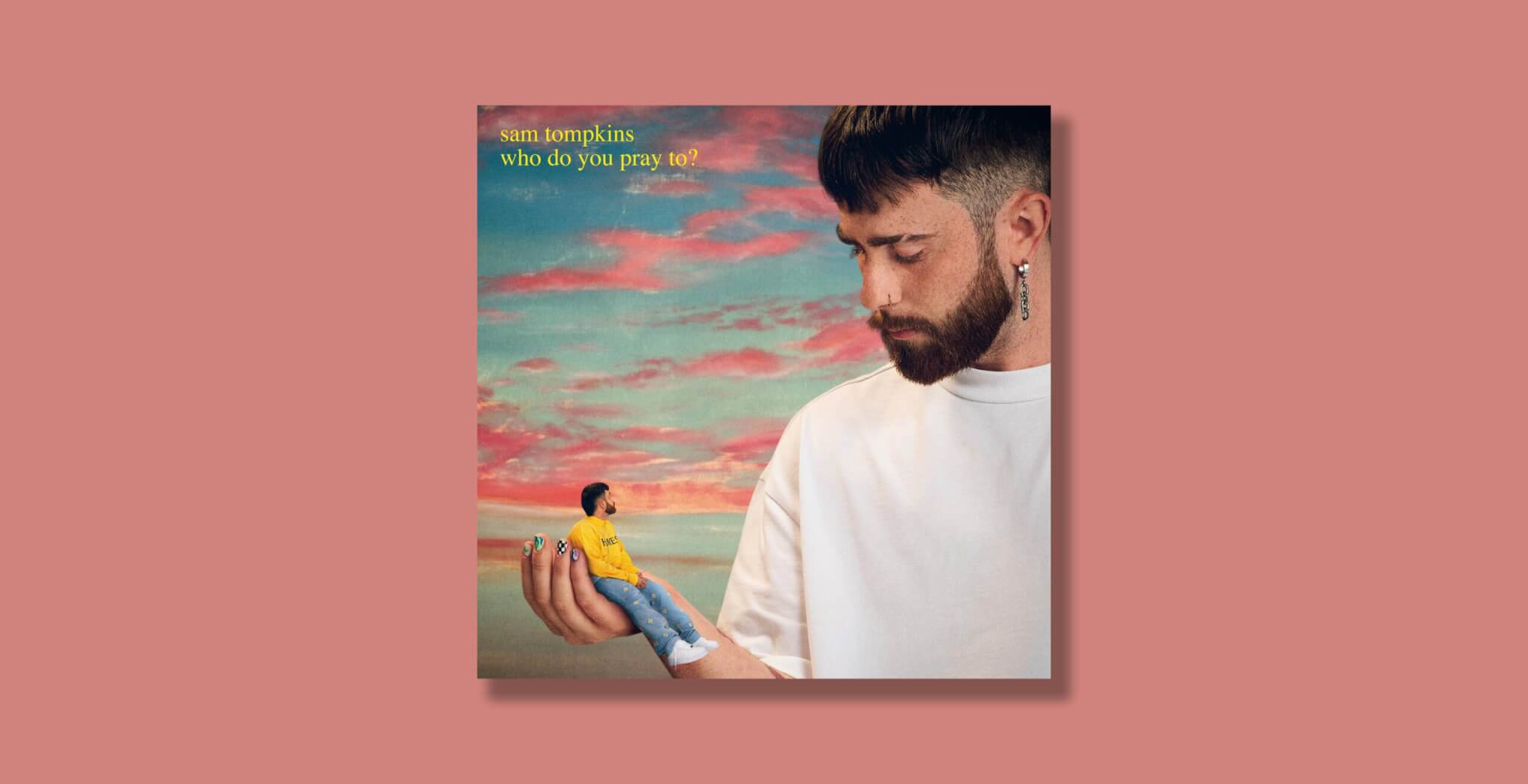 Who Do You Pray To?

Who Do You Pray To?

A day before his album release, Title sat with Sam Tompkins and dove into the feelings and personal experiences that made this project come together. Who do you pray to? is an autobiographical quest into discovering the meaning of faith, spirituality, belief, and what keeps us going, staying sane, and feeling safe.

During our chat, the 24-year-old talent, whose sense of humor has earned him a colossal online audience and fan base — only watch his Ig stories to get the vibe — filled the (zoom) room with excitement for being able to perform in front of an audience and share this project that he’s had under his arm for what it feels a long time now.

You’ll probably see him rising soon across the landscape of international pop. In the meantime, check out this tête-à-tête.

Let’s talk about your new album Who do you pray to? Tell us something about it — what inspired you, how do you hope your audience will receive it.

I felt like I was lacking purpose in my life and I looked around. When I’m in my time of need, I have some coping mechanisms that I go to and that’s the crux of what this project is — it talks about things like family, which is sort of the thing I lean on when I’m going through stuff. But it’s coming from a mindset that I hadn’t had before, wondering what there was out there outside of everything else, spiritually-wise.

I’m not really light and light, not spiritual, a bit atheist, a not really religious. So it was sort of looking around and being like — there are other coping mechanisms and faith that other people have, and I would like to see what that is for me. You’ll never know who you’ll meet, it’s like pursuing different light. And what will happen?

It’s only a few hours until the release of your album Who do you pray to, what are your feelings?

Right up until last night, I felt super nervous. But last night I basically listened to the whole thing and I was like — it’s really good, I really enjoy it, the lyrics are so purposeful and meaningful. Now I just feel super excited by this project, it means a lot to me.

And I’m excited about how people will be able to hear it for the first time because it’s quite old for me. I literally finished it a year ago, exactly to the day of its release. I’ve lived with it for ages and I doubt myself because it doesn’t feel new to me anymore, but for everyone else is going to feel like brand new.

It changes. Like yesterday, if you asked me, I would’ve probably said “Hero,” but today I’d say “Bloodline.” I love Bloodline. I like that’s a very calm, composed song.

Because of the composition, or?

When I look back that was a song where I had just lost my grandpa, my poppa. Normally I write songs with hindsight after I’ve gone through something, but I wrote this whilst I was going through it because I needed to write it to get through it. I think that’s probably why it’s my favourite at the moment because I look back on that and at how I made this project that’s about to come out.

“Bloodline” is also my favourite song, btw. And talking about “Hero” and “Bloodline,” I wanted to ask about your relationship with your relatives and the way it has shaped this album.

I have a close relationship with everyone in my family because it’s very small, but also it’s taken a while for me to get there. I guess this project is a product of lockdown, isolation, and COVID — a lot of people realised once we had to isolate who really mattered and who we really wanted to be in contact with and for me was family. I wanted to speak to my family all the time, you know? And that’s what this project reflects.

So maybe going back to the beginning, who have you prayed to, and who do you pray to?

I don’t think I’ve ever prayed in my life, I’ve been prayed for, but that’s the concept of the album’s title, a short version of my song “Who do you pray to when you don’t believe in God.”

One of your statements reads, “My music is very autobiographical.” In 3 words, how would you describe your new album?

That was a tricky question. Now, can you describe the hardest day you had in creating this album?

This is a really good question, but why no one’s asked me this before. I think it was after I’d written all the songs and I had a release date set. There was a certain point when I realised it might not be ready in time for that particular date, certain songs weren’t as ready as I wanted them to be at that point, so I had to move it six weeks later. By the time I was like — oh man, I’ve already told people the release date and some people are going to be upset, blah blah blah. But everyone understood and it was fine.

And the most exciting?

The most exciting day? I mean, it’s probably today, to be honest with you. But also I remember the day that I wrote “Bloodline,” I came out of it and the day of the mix was so good that I was like — oh my gosh, this is the best thing I’ve ever written. Probably at that point was the best sunlight ever and my favourite song I’d ever written.

I remember I was in London and I was driving back to Brighton, and I literally listened to it the whole way home for like, an hour and a half. I must have listened to it like 100 times in the car, but I was so excited about it.

Let’s talk about your tour. Are you already on tour?

I start tomorrow, basically, a small in-store for the record house.

Right, and in 10 days you will be in Berlin. How does it feel to leave the digital realm and stand on stage after spending quite some time with concert venues shut down?

It’s actually genuinely one of the most amazing things in the world. I hadn’t realised how much I missed it until I came to light two weeks before my last tour, that happened in November. I hadn’t performed in like two years and now I’m getting used to it again. I haven’t flown since my last tour, which is about four months ago, so tomorrow is really exciting.

What excites you and scares you the most about being on tour?

What excites me is the experience of moving around and hanging out with my mates — my band, my videographer, my manager, and my tour managers — and getting to experience something that so many people don’t get to do whilst working.

I equally like seeing people’s reactions to songs if they’re hearing them for the first time and that I’m able to really communicate with my fans face to face. That’s really important, meeting people off the shows is great.

I think the most scary thing at the moment is the concern of getting COVID and that everything just stops. That one person gets COVID and there’s a breakout. But if it wasn’t in COVID times, then the scariest thing would be forgetting my lyrics on stage or just freezing. I feel like I have it in me to be this sort of person, that totally screws up and forgets all of his lyrics to every song.

Has that ever happened?

No, but I have messed up lines. But everyone does. I mean, a lot of people have their mics turned off and they lip-sync and sometimes I think I’d be better off doing that, but I really like singing. I like taking the lead vocal out of all my tunes and not actually singing it and I always thought it was very unprofessional, but I’m realising it’s not.

I’ve never forgotten lyrics to a whole song, but there have been times where I’ve had to ask people in the crowd — what’s the lyric at the start? Once I get the first one, I’m off. But if I can’t remember, it’s no good.

Emotionally, spiritually and professionally, where are you now?

I think, emotionally, I’m at that spot in my life where things are going really well for me. But I also have imposter syndrome a lot of the time and I have doubts about whether I’m not capable of keeping this up. Those days of having a lot of thinking like that are becoming less and less frequent, which is nice, I’m learning to live on my own and I feel much better in my own company.

Spiritually-, I’m willing to try different things with it. I’d like to go to spaces, whether religious or not, where I can practise whatever spiritual thing I want to practise and figure out what it is I believe in, what teachings I want to subscribe to, and what I don’t want to subscribe to. I think that’s the beauty of it.

Career-wise, everything’s falling into place now. It just fills me with so much joy because I’ve been at this for nearly 10 years. The kid who at 16 had no confidence in himself definitely deserves this because he had to go through so much stuff to become me, become who I am. So, I feel good in general.

That’s very nice to hear! One more question, are you afraid of reaching out?

No. My dad always taught me to be someone who’s open. I love talking to my friends.  I think reaching out, especially in men, is something we’re told not to do so much. But luckily, my dad was not like that and taught me to be open about my feelings.