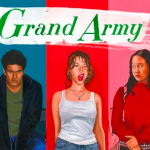 Nowadays, it’s hard to find a good teen drama show. With the excessive overacting, colors so bright no real teenager would wear, and complete inaccuracy in social media display, it’s not easy to find a show that’s both realistic and relatable. “Grand Army” is definitely the melodramatic adolescent fantasy we’ve been looking for.

While the show does have some cute and positive moments, it mainly displays the struggles and turmoils of specifically five standout characters. A young, vibrant teenage girl, who is not afraid of her expressing her sexuality and voicing body positivity, faces a harsh reality for women. A fairly irritating yet lost Asian-American teenage girl adopted at a young age, battles with her identity, and the need to fit in with the crowd. A struggling Haitian-American girl from an immigrant family trying to keep her private family life, social life, and school life afloat. An Indian-American teenage boy on the swim team questioning his sexuality, afraid to live his truth and face rejection from his parents. A bright, talented Black saxophone player unintentionally compromising his future and being faced with discrimination, whilst witnessing the marginalization of his best friend in the system.

The hardships of these five characters are both intense and intriguing. It transforms you into the show through the depth of their endeavors. You start to really feel for these characters, living in the moment with them, and empathizing for their experiences. Even the representation of social media, from things like postings on instagram to the text messages they receive on their phones, it’s more accurate than most millennial shows I’ve seen. It actually looks like they’re texting each other and not like a fake scene from a movie.

The themes addressed in this show include the sexual abuse, sexual orientation, racism, poverty, sexism, bullying, terrorist attacks, potential phsychosis, and so many more. It’s definitely an intense show and very much not a lighthearted, overdramatic, alternate reality sort of teen drama series. Even though there are the occasional animated scenes, with one of the characters portrayed as a zombie killing cartoon character, the show stays on a fairly serious note.

If you’re looking for a show to be truly indulged in, with heartbreaking moments that might make you tear up, amazing animation that will surprise you, and times of frustration where you just want to grab the characters and shake them into reality, this is for sure the show for you.

Don’t miss out on the Netflix original nine episode series, “Grand Army”. Maybe have some popcorn and tissues ready because this TV series is binge worthy.