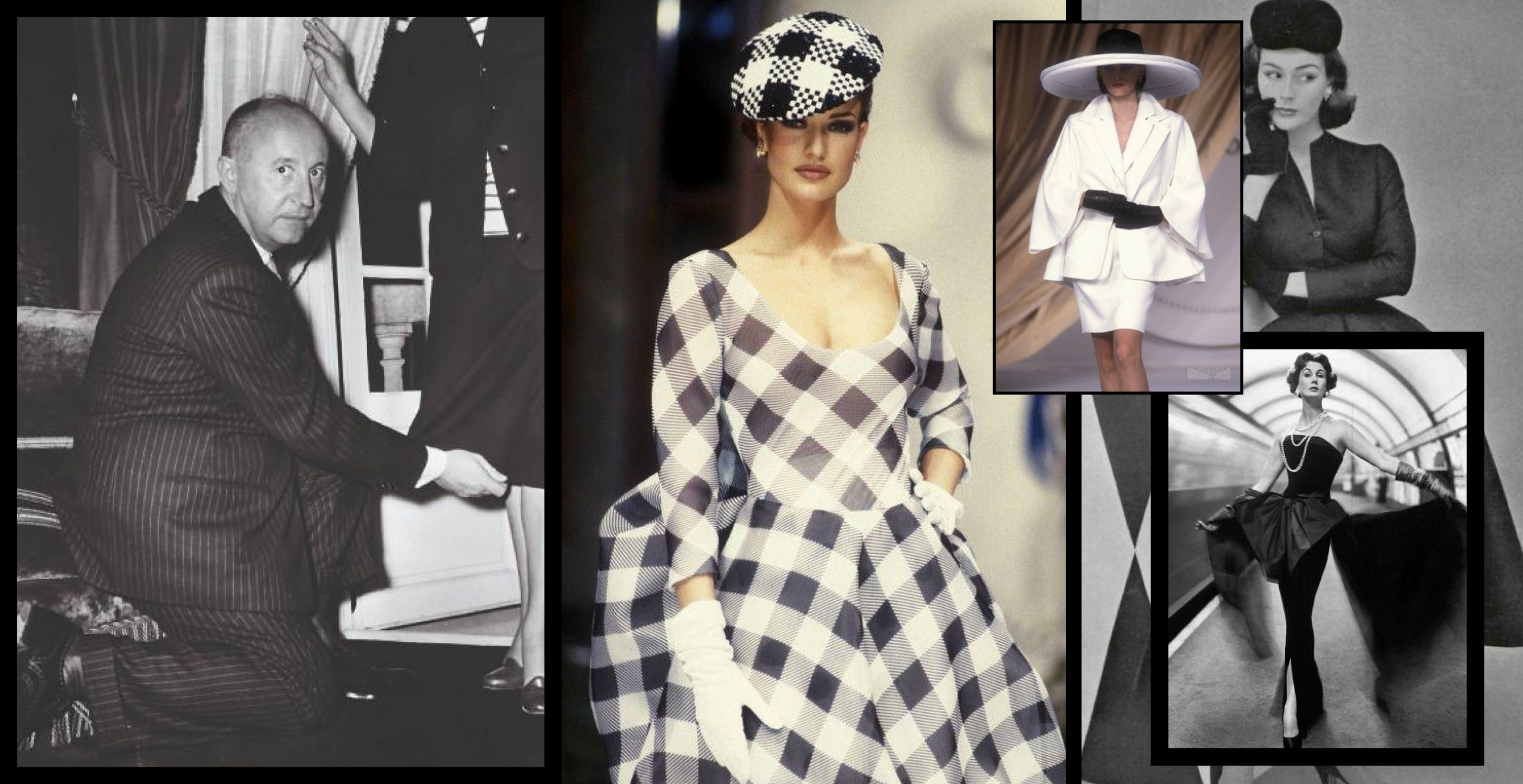 The fashion label Dior has been shining particularly bright for several seasons. In particular young fashion interests speak of nothing else than what Kim Jones plans to do next with the men’s collection. Collaboration announcements with street- and sportswear brands, such as Nike and Stüssy make everyone’s hearts bloom. But let’s take a look behind the scenes today and honor Kim’s predecessors.

The Christian Dior brand is one of the most famous high fashion brands worldwide. The last company value of Christian Dior S.A. was a quick 30 billion euros in early 2014. In addition to the haute couture for women Nord Dior high-prêt-à-porter clothing for women, a men’s line under the name Dior men and children’s collections named Baby Dior. The range includes leather goods, shoes, watches, jewellery, glasses, accessories, perfumes and cosmetics in the luxury goods segment. To the holding company Christian Dior S.A. Since 2017 it has been possible for the modes as well as Dior’s the perfume division to be owned by LVMH.

In 1946 the company was founded by the french fashion designer Christian Dior (1905-1957) and his financial partner and school friend Marcel Boussac, a wealthy textile manufacturer. Dior opened their haute couture studio on the elegant Parisian Avenue Montaigne. The first fashion collection launched by Dior in February 1947 was already a huge success and was celebrated as a new look by American journalists. Dior’s fashion was a departure from the fashion of the war years and was characterized by feminine and elegant designs with narrow shoulders, narrow waists, figure-hugging tops and wide, swinging skirts. Dior himself called his collection Ligne Corolle – “flower head line” and pointed out that he was influenced by the fashion style that Edward Molyneux had shown before the Second World War. As a result, the Dior company was largely responsible for Paris being able to assert itself as global fashion capital. From 1947 to 1950 Pierre Cardin worked as a tailor for Dior. The first perfume, Miss Dior, was launched in 1947 by the newly founded Christian Dior Parfums and is still a classic. The Dior boutique in New York, where Dior’s luxurious ready-to-wear fashion was presented, opened in 1949. In the early 1950s, the first licenses for Dior products, such as women’s stockings, were awarded to other companies. As a result, her own fur and hat studio was added.

Dior’s licensing policy for cosmetics, stockings and accessories became a successful marketing strategy and found numerous imitators in the fashion industry. After Christian Dior’s death in October 1957, the young Yves Saint Laurent, who joined Dior in 1955 as assistant, took over the artistic direction of the house. Saint Laurent’s first collection for Dior, Ligne Trapèze, has been an overwhelming global success. The “trapeze line” freed women from the need to wasp waist and presented them in a different way, an elegant way. In 1958, Saint Laurent showed his first own collection at Dior, which decisively influenced the fashion of the time as “op art fashion”. He freed the costumes one more time, this time from padding and stiffening on the waist, chest and shoulders, but without sacrificing the splendor and richness of the Dior-style costumes. However, he was released after six seasons in 1961 because Saint-Laurent’s style was too avant-garde for the man with the money: Boussac. Saint Laurent founded his own fashion label a year later and successfully sued Dior for breaching a contract. His successor was the then 34-year-old designer Marc Bohan (1926), who had previously worked for Dior in London and had been employed by Boussac in 1958 as an assistant to Saint Laurent. Bohan, originally a fashion designer at Edward Molyneux and Jean Patou, remained chief designer at Dior for almost 30 years until 1989. In 1967, Philippe Guibourgé, Bohan’s assistant, launched Dior’s ready-to-wear fashion under the name Miss Dior, as well as children’s clothing from the Baby Dior brand.

Bernard Arnault, who bought the house after a crisis, pushed ahead with the expansion of the retail business. In 1994 there were only six Dior boutiques worldwide, in 2003 there were already 144 (including shops-in-shop). The employment of the Italian designer Gianfranco Ferré for women’s fashion in 1989 had already ushered in a new era at Dior, his successor John Galliano changed. The target group changed from a wealthy, older lady to young, confident woman.

The responsible ladies fashion designer of the house Dior after Marc Bohan was on Arnault’s business from 1989 to 1996, as the first foreigner in this role, the Italian designer Gianfranco Ferré. Ferré’s creations paved the way for the successful repositioning of Dior in the luxury goods sector. During this time there was also the licensed women’s second line Christian Dior Coordonnées. From 1997, the position of women’s fashion designer (haute couture and ready-to-wear) was held by the avant-garde Briton John Galliano, who had previously worked for Givenchy. At Dior Galliano created bombastic, sometimes scandalous and often intolerable robes for the couture division, with which the House Dior almost inevitably made it onto the front pages of the international press, and rejuvenated the women’s collections of the House Dior – in a sales-promoting manner – crucial. The eccentric Galliano wanted to “sweep away the cobwebs, bring the house back to life”. For the final applause on the catwalk, he mostly put himself in the spotlight. Galliano was suspended from the house of Dior in late February 2011 due to anti-Semitic statements under the influence of alcohol and released on March 1, 2011 after 15 years as chief designer at Dior by the then CEO Sidney Toledano. The last prêt-à-porter collection designed by Galliano for Dior was shown on March 4, 2011 in the absence of Galliano at the Paris fashion shows. The creative direction took over as a result of Galliano’s longstanding assistant Bill Gaytten and his colleague Suzanna Venegas. However, the haute couture collections presented by the two from the beginning of July 2011 received cautious reviews.At the same time, the company reported steadily growing sales. On April 9, 2012, the house of Dior named the outgoing Jil Sander designer Raf Simons, who had achieved fame primarily with minimalist fashion, as the new chief designer of all women’s collections by Dior on April 9, 2012. His first haute couture collection took place in Paris on July 2, 2012 and was highly praised by the press. Simons ’first ready-to-wear collection for the Dior women’s division was presented in Paris at the end of September 2012 and also received extremely benevolent reviews.At the end of October 2015, Dior announced that Simons was leaving the company at his own request. In early July 2016, Dior announced that long-time Valentino designer Maria Grazia Chiuri (1964 in Rome) was the first woman in this position to be appointed as the new creative director of the Dior women’s fashion division.

In 2000 Arnault used the then 32-year-old former Yves Saint Laurent designer Hedi Slimane for the newly created, very modern and androgynous Dior Homme collection.The Christian Dior Monsieur collection has been discontinued. Karl Lagerfeld claims that the reason that he lost 42 kg in weight through a diet in 2000 was his preference for Dior Homme’s skin-tight suits. In 2007 Slimane’s long-time assistant Kris Van Assche took over the creation of men’s fashion at Dior Homme. He was followed in 2018 by Brit Kim Jones, previously a men’s fashion designer at Louis Vuitton. The latter renamed the division Dior Men.Even if the brand was officially called Dior Homme and is called Dior Men, only “Dior” was written on the sewn-in labels of the items of clothing. In the late 2000s, Hedi Slimane established a stylized bee abeille as a trademark for the men’s collection, which can still be found today, for example, as embroidery on polo shirts, hats and ties.

Since Kim Jones took over the men’s line, the brand has been an integral part of every fashion week and fashion trend report. A very honorable episode and predecessors gave the traditional fashion house an unforgettable career. We are looking forward to the future.