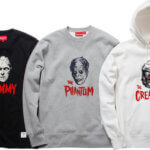 Streetwear Inspired by Horror – A Best Of

Streetwear Inspired by Horror – A Best Of 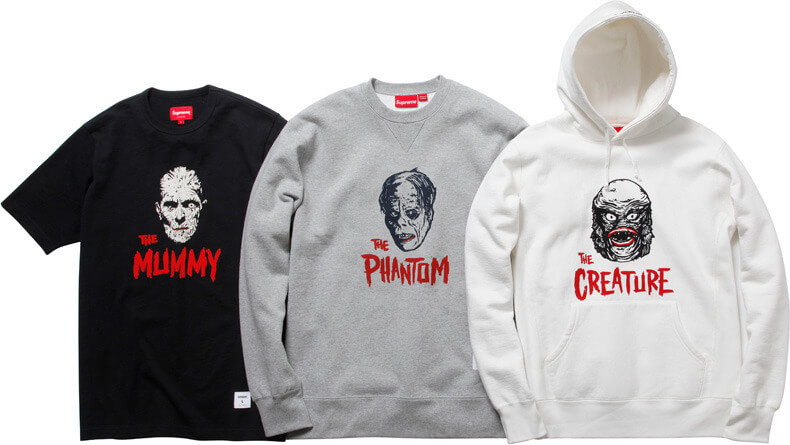 The first time I noticed horror in streetwear was in the year 2010, when Supreme released the Universal Monsters collection of hoodies, crewnecks and t-shirts featuring the faces of classic movie monsters The Phantom (Phantom of the Opera), the Creature (The Creature from the Black Lagoon) and the Mummy (The Mummy). Simple designs, but very tastefully done. Supreme heads were actually scared to the bones when the collection dropped. Not because of the spooky designs, but because it was one of the first times mainstream pop super star Justin Bieber was seen rocking the brand formerly strictly reserved for the if you know, you know-crowd.

It was also around that time when Alife released the spookiest caps ever. Namely their Frankenstein and The Mummy New Era 5950’s coming with matching shirts. Matching shirts might be a long stretch, because even though there is one cap plus shirt for each monster, combining The Mummy shirt and The Mummy cap would look maybe just as worse as the rotten film creature itself. Even the internet seems to have forgotten about this and no hi res photos of the shirts were to be found.

But here the New Era hats:

Over the last decade streetwear has perfected the horror themed collab and right in time we are going to present you some of our favorites.

Jun Takahashi’s Undercover is known for their nods towards legendary British film maker Stanley Kubrick. Is Clockwork Orange a horror movie? Some might argue, but as long as Bart Simpson wore main protagonist Alex DeLarge’s (played by Malcolm McDowell) bizarre outfit in one of the early Treehouse of Horror Episodes, it counts as horror for me. The plot line that follows a teenage violent delinquent’s odyssee through senseless violence, prison and “rehabilitation” is certainly horrific. Both the jacket and coat included in the 2019 collection are definitely the hero pieces and just amazing to look at. While the jacket featuring Alex and his amazingly blue eyes clearly hypnotizing you, the coat featuring Alex in attack mode is just menacing. Boss level collab.

Not scary enough? Undercover also released a this Murder/Redrum knit sweater referencing the classic scene from Kubrick’s The Shining.

Author Clive Barker released his novel The Hellhound Heart in 1986 with a movie adaption following only one year later. The demonic entity named Pinhead and his comrades – the Cenobites – had already become horror icons, when Supreme released a huge Hellraiser collab for Spring/Summer 2018.

Coats, M65 army jackets, football jerseys sporting red camouflage, sweats, t-shirts and even Pinhead key chains were included in this capsule collection which has been one of the biggest horror mash up Supreme released so far.

The brand stepped into similar territory with the release of Supreme x The Crow for Fall / Winter 2021. James O’Barrs cult comic about an undead out for revenge was turned into a blockbuster movie in 1994, but Supreme solely used graphics from the source material for this get up of workwear staples, leather jackets, hoodies, shirts and long sleeves.

Kyle Ng’s Braindead is know for its fable for the macabre. The brand is literally called Braindead after director Peter Jackson’s 1992 gore fest.

Braindead is a cult movie, just like 1973’s The Exorcist, which is hailed as one of the scariest movies of all time. Braindead used some of the movies well-known graphics for their collab, but that seems in no way lazy. Those images are to horror movies what the classic Coca Cola logo is for refreshments – just iconic.

Hereditary is by far the scariest movie of the last decade. A24 Studios is known for their excellent movies like Uncut Gems, The Witch, Mid 90s, The Green Knight and the accompanied merch collections in collaboration with Online Ceramics.

The Hereditary collection is nothing for the faint-hearted and some pieces just can’t be worn outdoors, which makes this release really stand out among the other mentions in this article.

The pieces seen below are by far the tamest ones we could show and the pair of sweat pants has a man completely set ablaze casually printed on its leg… Like it’s nothing.

If it’s not scary enough for you, check their exclusive release celebrating Ari Aster’s horror master piece Midsommar that was released in 2019.

UK brand The Pale Girls recently released this shirt commemorating one of the bloodiest movie scenes of all time. Check it here. No more words needed.

Texas-based Andafterthat is the brand that mastered the bootleg design game. Hands down. Nobody does it better. Just by the selection of pop cultural references featured on the gems founder Edgar Gonzalez releases on a regular basis, you can say that he has to be one of the most pop culture-versed creatives in the streetwear game. If not in the whole fashion industry.

Nowadays even stars like Zendaya are rocking his designs and with pop culture being one of his main driving forces, he of course put out a horror shirt along his way. It featured rejected poster designs for Stanley Kubrick’s adaption of master of horror Stephen King’s epic novel The Shining by designer Saul Bass and accompanying notes by Kubrick.

But the brand hit bullseye last year when – just in time for Halloween – the Possession tee was released.

Possession is 1981 psychological horror movie by Polish film maker Andrzej Zulawski featuring a spine tingling performance by Sam Neill. The whole movie takes place in 80’s West Berlin and is just too much to put it into words.

Streetwear x Horror is no new topic and since the release of flashy monster themed New Era’s more than a few designers blessed us with releases tastefully combining this two fields of entertainment. The annual release of Halloween-themed garments in October is now a matter of course for most brands, which hopefully does not turn into a half-assed commodity over time. But as long as creatives such as Edgar Gonzalez and his brand Andafterthat are around, you can make sure that there will always be awesomely designed horror-themed shirts on the market.