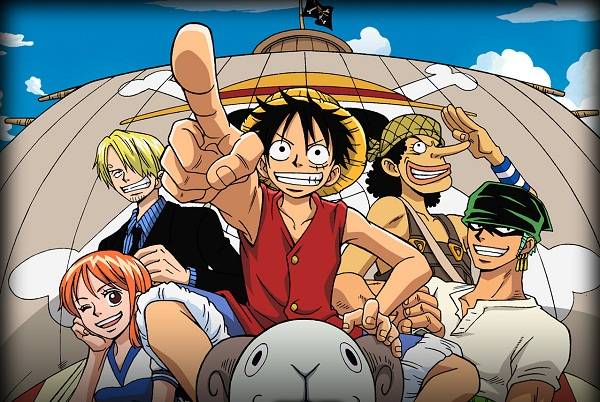 The story of One Piece is about a young pirate named Luffy (German: Ruffy).

But now back to the topic, because this is not about me, but about our favorite pirate – no, not Jack Sparrow – I’m talking about Monkey D. Luffy, of course, the leader of the Straw Hat Gang.

To reach his goal, Luffy must set out to find the One Piece, but of course, he is not alone in his adventures. His crew always follows him, every step of the way, without ever losing faith. They are, after all, “Nakama” – the best friends ever – they are always there for each other and that will not change, no matter what.

The treasure – the One Piece:

Even before the death of the pirate King Gold D. Roger, stories existed about a huge treasure existing on the last island of the “Grand Line” – the “One Piece”.

At the time, however, it was more a myth than a fact.

The pirate Gold D. Roger, however, set off in search of this treasure anyway.

The navy, which ensured law and order in the old and new worlds, forbade the search for this treasure. However, this decision led to all the more people believing in the existence of this breathtaking booty.

It is not known if Roger removed anything from the treasure or added anything to it.

The treasure originally came from the pirate Captain Joy Boy – the boy must have had a lot of fun creating this treasure.

Before Roger was executed, he announced to the world that this great treasure could be claimed by anyone who could reach it, thus beginning the “Great Age of Pirates”.

Luffy: The Rubber Man – The leader of the Straw Hat Gang, a strong young man with big ambitions. His abilities allow him to deform his entire body as he wishes.

Zorro: The Pirate Hunter – Zorro worked as a bounty hunter until Luffy found him and made him his 1st mate. He is a swordsman who uses a 3 – sword style.

Nami: The Navigator – The “true leader” of the Straw Hat Gang, powerful, intelligent, beautiful, and money-hungry. I think she is Oda’s dream woman.

Sanji: The Master Chef – Blackfoot Sanji, he learned under one of the greatest chefs of the “East Blues” and is not to be underestimated in the kitchen as well as in combat.

Ussop: The Gunner – Also called “God Ussop”, the guy with the Pinocchio nose and an eye that makes even the best sniper of our time look cold.

Chopper: The Ship’s Doctor – An animal man, sweet, kind, annoying but above all a terrific doctor and a good fighter.

Robin: The Archaeologist – The woman with the greatest intellect on the planet and one of the few capable of reading a poneglyph (signpost) to One Piece.

Franky: The Cyborg – I call him Cyborg, but he’s actually the shipbuilder and repairer. But he is also a cyborg.

Brook: The Musician – The Undead “Soolking”, an undead musician and swordmaster. Probably the most sympathetic skeleton in the world.

Jimbei: The helmsman – The “fish karate” master and helmsman of the Straw Hat Gang. He used to be one of the feared “Seven Samurai of the Seas”.

In the world of One Piece, there are some creatures and objects with special abilities.

Among them is the so-called “devil fruit” – a piece of fruit that robs the consumer of the ability to swim, but in exchange one also receives a special ability.

These abilities differ from fruit to fruit. Each devil fruit, each ability supposedly exists only once in the whole world.

One Piece is a very emotional journey, not only for the characters but also for the audience.

The world of One Piece is extremely extensive. Each “story arc” tells a new and interesting story. You can start the manga and the anime as a newcomer at any arc. However, it is recommended to start with the actual beginning.

However, it is hard to commit to over 1000 chapters or 957 episodes. I recommend watching the series bit by bit. You can always take a break and return after a while to learn more about Luffy and his friends.