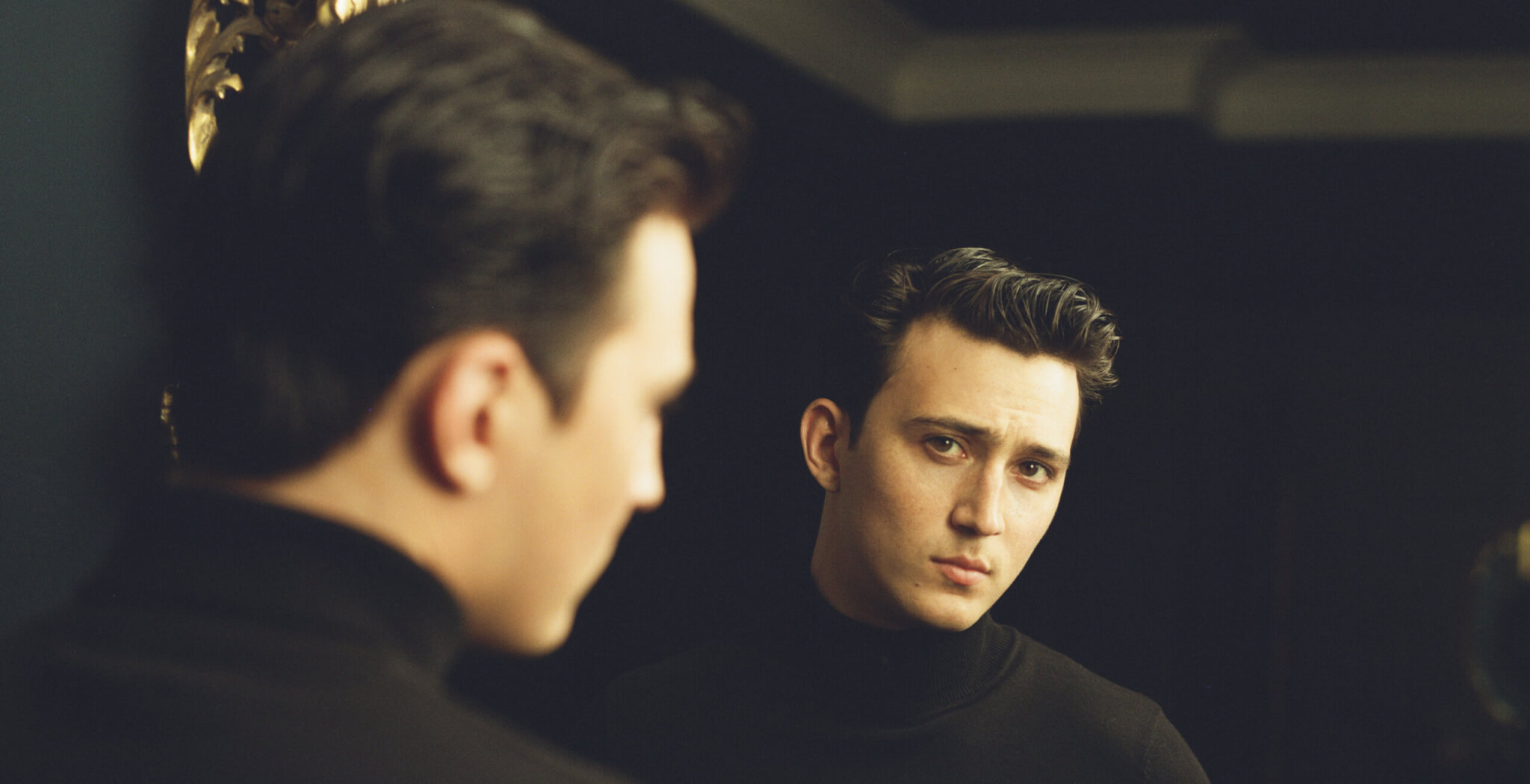 With Mental Health Awareness Day a few days ago, this interview fits in just perfectly. Not only has Zak Abel himself been an ambassador for the mental health charity CALM for quite some time now, he also started a discussion about masculinity with his newest release “Less Of A Man”.

Next to “Be Kind”, “Why Can’t We Get Along”, and “Right Side Of The Bed”, “Less Of A Man” is Zak’s fourth single this year and questions the stereotypes and ideals around masculinity that have influenced how men should be, think and feel.

In a world in which men should feel ashamed or not ‘manly’ about emotions, asking for help, or opening up, Zak is here to change exactly that!

Have you been enjoying any post lockdown advantages? What has been your highlight of the last couple of months?

Yeah, I actually did my first headline show for the last two and a half years last week. I did two nights at The Jazz Café in London and it was so needed to have that experience in front of a live audience again, which is so special. And actually, throughout the lockdown, I’ve been doing a lot of Instagram lives and I was able to meet a lot of people that have been listening to my music and now actually talk to them. I’ve recognized so many people in the crowd who I’d met on these Instagram lives. It felt like everything was coming together.

You’ve already released four singles this year – have these songs been the result of a productive phase during lockdown or did you experience any difficulties with your creativity?

Yeah, I think I was able to be productive. I obviously had to adjust a little bit like every musician had to. Maybe in the past, you were able to go to the studio and meet loads of people face to face. But this time around, a lot of my first single of the year „Be Kind“ was done remotely and over zoom. I recorded a lot of the vocals for that song in my living room, which I never thought I’d have to do. But you just make it work. And it’s a cool lesson. You’re adapting to whatever life throws at you.

Where do you draw inspiration from?

If I have a conversation with someone and they say something or I say something where I’m like yeah I’d like to put that into a song, I literally stop the conversation and write something down. And then when I go into the studio I’ll be like: “this is what I wanna talk about”. Or it can just be me jamming on my keyboard or guitar at home, just playing some chords and melodies and then mumbling some words. And then you kind of make a song that way. Most of the time I’m inspired by topics and write about those.

Which artists have been most influential for you?

I love Paolo Nutini. Just his voice and honesty – you believe every word when he is singing. I love Micheal Jackson. He’s just so good: the melodies, the vocals, the musicality, and the production. Everything! It’s so difficult to make music that is complex but sounds so simple. That’s so impressive. And those two are only a few inspirations.

What does it mean to you to have a platform and address topics like mental health in your music?

It’s something I’m very very passionate about and it’s something I’ve struggled with in my life. I think when I was 20 or 21 I started to experience anxiety and depression. It was a battle for me but I feel like I’m in a really good place now. And I think it’s important for me to share that with people in my music because that’s just what has been happening in my life. So, it makes it authentic. At the same time, I do see the value in putting out information or songs about mental health, because when I was going through a really tough time it’s useful to see “oh this other human being is experiencing something similar to me and that makes me feel a little bit better“. If I can do that for only one other person, that makes me feel really good.

Do you have any tips on how to be authentically yourself and how to take good care of your mental health?

Honestly, I think the most important thing is sleep. Literally. It’s actually something I am still, at 26, struggling with. But, when I do get a good night’s sleep, the world is a lovely place. I can have great conversations with people, I can be on time for things, genuinely be a much more productive human being. Getting 8 hours of sleep – it seems so simple. We don’t have to pay for any supplements or do any crazy work, just sleep enough and you will feel better than If you sleep 4 or 5 hours. I don’t know why it feels so cool to stay up late because then you wake up and you’re a shell of a man, and that’s never good. I also like mindfulness meditation. I generally just try to be mindful. So accepting whatever it is you’re experiencing and focusing your attention on one thing at a time. That’s been pretty useful to me.

Why do you want to challenge the ideals and stereotypes around masculinity?

Because growing up I definitely didn’t fit into the stereotypical manly image. And I think that was quite tough for me because you do want to fit into society all the time and you want to fit in how other men are and you want to feel like part of the group. So, when I didn’t feel like that I was like: Is there something wrong with me? But no, I actually don’t think there is. There are many many ways to be a man. So, I really wanted to write about that. And as I got a little bit older and a bit more confident in myself I realized, If I don’t fit into the traditional male narrative it doesn’t make me less of a man.

What made you question your masculinity before? Ugly crying to Bridget Jones?

I’ve just been more sensitive than most guys growing up. I’d say I have quite a lot of empathy. That’s something that wasn’t quite so celebrated amongst boys. It’s not like “bro, that was so cool how empathetic you were. Respect!” Another thing is being able to communicate how you are feeling and being open and honest when you’re going through a difficult time. There’s a problem with male suicide. I think a big reason for that is men feel they can’t ask for help, because it makes us less manly and less strong to reach out for help. I think that’s nonsense. Every human being has things that they can cope with themselves and things they need a bit of help with. And I don’t think it makes you less of a man, I think it makes you more of an emotionally intelligent adult or human.

In regard to that, what is the best piece of advice you’ve ever received that you would also tell your younger self?

Man, I’ve had lots of good advice. Well, relating to “Less Of A Man” would be: No one knows what they’re doing the majority of the time. We look at adults and think they’ve got their shit together but most of the time they don’t. They’re just winging it. They’re trying to figure out what to do with their lives. So, on the one hand, don’t worry too much and on the other hand, just try your best and believe in yourself.

How would you say your personal idea about what it means to be a man changed from a child, to a teenager, and now as a grown up?

It did change drastically. I didn’t really grow up with a dad. So the idea of what a man is, a male role model, I wasn’t really given.  I had my table tennis coach who would act as my male role model but of course, I wasn’t living with him. I’ve never had a constant male presence in my house. But I guess as you grow up you see what most men are like. Do I fit into that? Sometimes yes, sometimes no. And as you get older you think about if you fit in or not. I probably haven’t changed that much growing up but my perspective on what men are has changed. Men come in all shapes and sizes and can be anything. I guess that’s also the point of the song. Sure there are ways that men will be like more commonly but that doesn’t mean that is just the way they are. I do feel like a lot of men might change to fit into a box, but are they really like that? Did they start like that? I don’t know…

The music video to “Less of a man” shows you and other boys and men in their beautiful diversity. What was your vision or goal for the music video?

I’ve basically wanted to portray boys and men doing things that aren’t stereotypically masculine (whatever that means). And basically say that if someone loves knitting just because lots of men don’t like knitting that doesn’t make them less of a man. All of these things, whether it’s wearing makeup, whether it’s crying, whether it’s knitting – none of those things should be gendered. Why should that be a feminine or masculine thing? It’s knitting. It’s got nothing to do with gender. So basically I wanted to show that. Just like wearing brightly colored clothes seems more common amongst women. But why? Why do we associate it with femininity? So that was kind of the idea behind it.

Would you say you have found your True Identity yet? If so, how would you describe it?

I don’t know. How do you know you’ve found your true identity yet? What if you’re wrong? What if I think I’ve found it and in a year’s time I’m like: no. Basically, I feel like I’m in a good place right now creatively. I am able to make music about things I really care about. “Less Of a Man” is a topic I feel very passionate about and I’m really grateful that I’ve been able to put out the message in the way I have done. I’d say stylistically I love soul and funk music and mixing that with pop songwriting and my subject matter, that feels really good to do all of those things. Right now, I’d say I have found my true musical identity.

What else can we expect from you in the near future?

I’m planning a European tour at the moment. Hopefully, I’ll be able to travel for music once again and see some beautiful faces at live shows. I’ll probably also have one or two new songs out by the time the tour happens. So I’ll also probably play those.