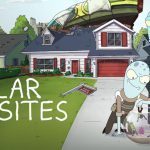 Is ‘Solar Opposites’ the new ‘Rick and Morty’?

Is ‘Solar Opposites’ the new ‘Rick and Morty’?

Unless you’ve been hiding under a rock for a few years then I’m sure you’ve heard of the ever so popular adult animation “Rick and Morty”. The series features a mad cynical scientist Rick and his frightfully hilarious grandson Morty. They embark on interdimensional space adventures giving the show a SciFi twist.

On June 20th, 2020, the creatures of Rick and Morty aired a show called “Solar Opposites” (originally released on Hulu and now also available on Disney+). As expected there was initially an intense comparison between RaM and SO but as a viewer you soon realize, it’s similar but different. Solar Opposites revolves around an alien family that left their home planet right before an explosion and crashed their ship on Earth. The alien family, Korvo, Terry, Yumyulack, Jesse, and Pupa, decide to make the best of the situation and live as a family (two “dads”, a preteen girl and boy, and a “baby”). The unconventional family sees Earth and humans from a completely outside perspective, which gives the show a funny angle.

With the feel of crazy Rick in the voice of Solar Opposites protagonist Korvo and the obscene jokes that occasionally break the fourth wall, there definitely are similarities between the two shows. However, the characters have a very different feel as their personalities don’t match at all and SO is a bit more playful than RaM.

“A lot of the time if we want to do something that’s making us laugh, but there’s a bunch of stuff getting in our way, it’s like Candyland. We’re like, well, what is the little secret passage? What’s the shortcut we can take to get in to do a bunch of fun stuff? Because Solar’s guiding light is, we’re having a blast making it” said co-creator Mike McMahan in an interview with The AV Club.

So, if you’re a fan of Rick and Morty or adult animation in general, Solar Opposites is definitely a show for you. It’s not necessarily the “new” Rick and Morty but it’s the new watchworty Solar Opposites, a show with character and its own personality. As a certified binge-watcher, I’d say this show will pull you in and spit you back out after the current 10 episodes (Season 1: 8 Episodes, Season 2: 2 Episodes so far with weekly updates on Disney+).