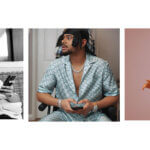 Wes Nelson is a British rapper and public figure. Since 2018 he has participated in various reality tv shows, including X-Factor, Dancing On Ice, and most notably Love Island. His former professional interests also include Muay Thai kickboxing and football. But now, the 24-year-old is all about music and aims to focus on one career branch, instead of many:

“I have got to put all my eggs in one basket and make sure I’m perfecting my craft as well as possible. Although I have had a lot of interests, the one that has always been constant is music. I can’t see myself losing interest in it, it is something I have always cared about and its’s my dream.”

At the moment, the Geordie is working on building his connections and fan base all around the world. He’s even working on an exclusive remix for his fans here in Germany. We have no doubt that Wes will be successful with his plans. His first release “See Nobody” feat. Hardy Caprio was very well received and achieved 16 million clicks on YouTube and over 48 million streams on Spotify. And soon he will be releasing his new song “Drive” together with Clean Bandit.

You released your first single “See Nobody” last year, in the middle of the pandemic. Did this situation kindle your creativity or did you experience any difficulties?

I think it was actually good for me in a way, it took me away from all distractions and really allowed me to focus. It was a good time for self-reflection and finding inspiration from within rather than looking outward, but it was difficult at points. At the time I was living with my friend Josh and I recorded the song in his bedroom with my head in a wardrobe just holding a mic, so no fancy equipment or anything.

Your latest sinle “Nice To Meet Ya” fuses Afro-beats and R&B. How would you describe your musical style? Will you be open for experimenting in the future?

I think it’s difficult to describe my genre really. I take aspects and inspirations from R&B and Afro Beat for sure, but I’m not sure I could confidently put a label on it. And I’m definitely open to trying other genres, and have a few pop bits and some dance bits – so keep your eyes peeled.

Which advice would you give other young musicians who are at the beginning of their careers and maybe struggle with the creative output?

It’s hard to understand your personal creative process without going through it. I think that even over the past year mine has changed and it should always be changing because you should always be looking for new ways to draw inspiration. For me, it’s just about starting from scratch with a blank canvas, overcomplicating things can limit your freedom and you want as much room for creativity as possible. Sometimes it’s good to strip it back.

Which is your favorite album of all time and why?

“Year of the Gentleman” by Ne-Yo, because especially with the R&B stuff, I have taken most of my musical inspiration from what I listened to growing up. I think it was the first time I actually bought an album and I listened to it in the car for years and years.

Where do you find inspiration? What keeps you thriving and ambitious?

I’m very internally motivated, and I set myself a lot of goals. I think it’s best for these to be small and achievable goals because focusing too much on the long term can really affect your ‘now’. Setting short-term goals can allow you to actually get stuff ticked off the list every day, and that adds up.

At TITLE Mag we focus on being true to yourself and your work. Would you say you’ve found your True Identity yet? If so, how would you describe it?

Yeah, I definitely think I have found my true identity, just because I have always been true to myself. It doesn’t really matter if I have been doing Music, TV, or engineering, I’ve always stuck to my guns and it’s worked out well for me this far. I think that people appreciate authenticity and can see through the smoke and mirrors.

I’m really excited to travel. Getting out to different countries and working with other artists is something that I haven’t really been able to do as much as I’d like. And of course, performing live to my fans, it’s all gone so well so far and I’d love to be able to share that and connect with those who have supported me.