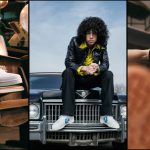 When the original Converse Pro Leather came out in 1976, it was unknowingly the birth of an icon, kicking off a new defining era of self-expression. What followed were three of the most influential decades in basketball, hip-hop and skateboarding culture that defined streetwear as we know it today.

From the loud and bright 80s fashion entering into conservative basketball attire to the 90s influence of hip-hop culture both on the court and in early skateboarding circles, straight into the 2000s as all three subcultures intertwined to create an urban super culture.

The Pro Leather was at the beginning of it all.

Overkill has curated a wonderful editorial that captures the moods, while we drift away in our thoughts, back to our youths and childhoods, when everything seemed to be at least a little easier because where there is space for self-expression, there is freedom.