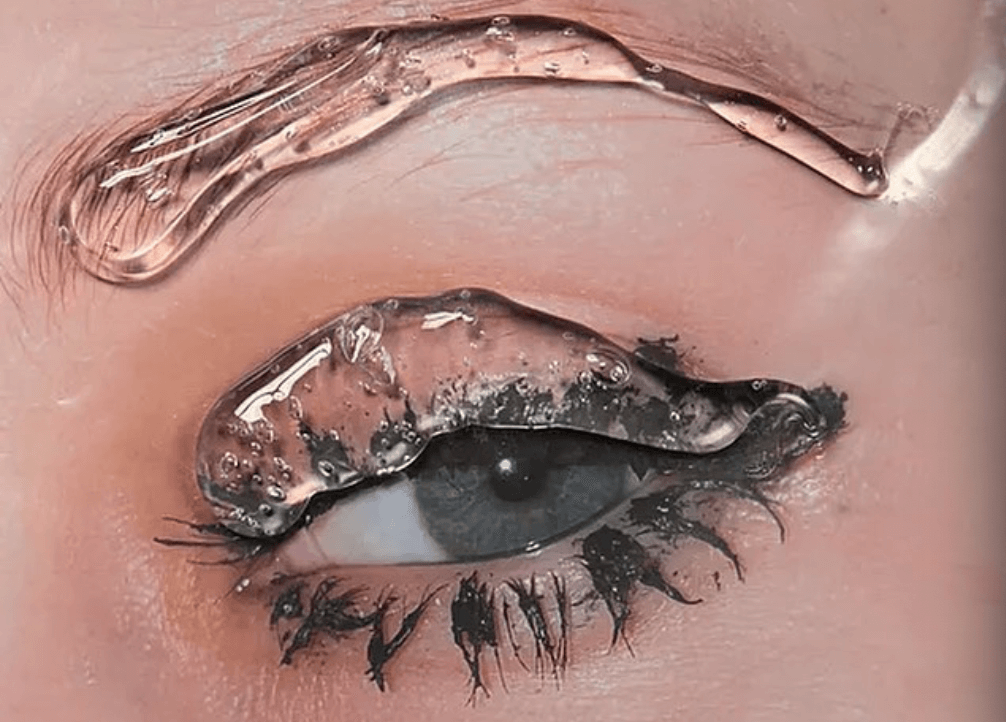 Opinions on the influence of beauty on identity and the reasons why people use beauty vary: On one hand, beauty and cosmetics can be understood as an act of self-discovery. On the other hand, fashion theorist Barbara Vinken describes in her book “Angezogen. Das Geheimnis der Mode” that “the female sex still makes itself into a piece of jewelry” and that this is more about the desire for perfection than fulfillment and one’s own identity.

Eszter Magyar (creative mind behind the Uglymakeuprevolution) describes identity as “a layered reality made from different components: I often visualize it as layers of semi transparent but coloured plexiglass on top of each other — which you are looking at a certain way from the distance. You can always add new and new layers which will change the overall picture — because we, as humans, are constantly changing through our experiences. Part of our identity is not just who we are, but who we want to be and Makeup can be a tool to tell us about ourselves.” But what role does beauty and decorative cosmetics play?

One of the central theses of Vinken’s text is that women (or people and consumers in general) today still make themselves into “jewelry.” This happens independently of advancing gender-fluid fashion from various fashion houses, as well as metrosexuality of men and the popularizing narrative that makeup and beauty is inherently genderless. Making oneself a piece of jewelry in this case takes reference to makeup. The woman, who is generally considered the protagonist in Vinken’s text, wants to approach an ideal propagated by media and society. In order to get visually closer to this icon, as Vinken calls it, there are measures and means to fulfill this. On the one hand, the thesis deals with the desire of women to conform to a certain ideal, respectively to a propagated icon and perfection in the eyes of society.

“Perfection is an idea — someone else’s idea to be exact, which is constantly in change. Society wants us to adapt, to reshape ourselves from in and out to become the perfect customer, the target audience for everything,” states Magyar, the Budapest porn, London-based and former Berliner makeup artist that mixes human aesthetics with social criticism to question ubiquitous beauty standards and everything surrounding the beauty industry. “But personally I prefer character over perfection. Perfection is predictable (even if it changes), it’s like a boring uniform people want to wear willingly in hopes to be special.” The creative behind “MAKEUPBRUTALISM” and “UGLYMAKEUPREVOLUTION” is known for her clumped up lashes looks and the showcasing of crooked teeth covered in bright paint, smudged eyeliner and splodgy lipstick anywhere but where it usually belongs. Magyar sure knows how to make something ugly and grotesque strangely beautiful.

In contrast: Vinken also states that the possibilities offered by the society make it possible to approach this ideal, such as drugstore chains and hairdressers. As the text states, “The beauty and waxing salons, manicure and pedicure chains, the endless shelves of makeup (…) are now as much a part of the image of modern cities as electric street lighting.”

The constant desire for perfection (and thus the lack of one’s own identity) has a historical background. “In the past women’s worth was often measured by (and mostly by) their beauty. If they were desirable, they were able to marry good — so the formula was easy: Being desirable was the way to success. And if we are being honest, this is still very actual. Think about women in the entertainment section: Actresses, singers, and more, regardless of their great talent, they all have to look a certain way to succeed. People who are against makeup see it only as a tool to serve the male gaze.”

“The Beauty industry can cover up the distance between desire and reality — it can blend you into the person who you want to be, it can portray you as how you want to be seen.”

By covering up, highlighting, hiding and emphasizing, people strive for perfection by lifting themselves to more possibilities. “If you can leave behind the pressure of perfection and your intentions are not only ‘to correct yourself,’ there is tons of space to experiment with shapes, colors and boundaries,” concludes Magyar.

Alternatively, cosmetics is often understood as a method of individualization and as an expression of the individual. Magyar describes it as “the highest level of satisfaction — a moment of inner peace. You find things beautiful — which are making you happy even by looking, hearing, experiencing them.” Added to this are technical innovations that offer new creative design possibilities for the presentation of the exterior. It is only through one’s own style and taste, some of the things that make up the individual, that one’s own representation of identity becomes visible. That is, beauty serves as a demarcation and guide for social norms and classes, but also as a great tool to make one’s own identity visible in an aesthetic way.

And what influences or reinforces our identity now? Magyar sums it up like this: “The question should be, is there anything in this world which does not influence who you are?”