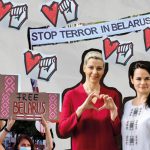 The last “dictator“ in Europe – Alexander Lukaschenko –  is facing the biggest challenge in his career – his (possible) defeat. He got elected for the sixth time in a row with about 80% of the votes, as he claims. Three women challenged him and started a revolution.

The woman, who declared herself the new president of Belarus is called Svetlana Tikhanovskaya. She doesn’t even want to be the new president, she says. Her husband – a criticizer of Lukashenko’s – regime is in prison. Therefore, Tikhanovskaya took over the candidacy instead of her husband Sergei Tikhanovsky – a famous blogger. She was the only candidate of the opposition, who got the legal allowance to even candidate. The president might have underestimated her!

The 65-year-old came to power in 1994 amid the chaos caused by the collapse of the Soviet Union (1991). He preserved elements of Soviet communism – multiple manufactories are under his control, just like a lot of big media channels. The secret police is still called the KGB. The machinery of surveillance was not a real secret to society. But now, things are changing: there is a shift in mood, citizens complain about corruption and poverty. They don’t see a desirable future in this country, if things resume unchanged.

Svetlana Tikhanovskaya is actually an English teacher. She toured the country with her two female allies: Veronika Zepkalo and Maria Kolesnikowa. Hundreds, thousands of people came to their rallies. A sign, that people in Belarus are fed up with the government and its totality. The chance of a real win suddenly became possible. Hope wandered through the streets like a breeze in the hot summer months.

The election came and went.

The protests began – hundreds of people gathered in Minsk.

The government declared the protests as illegal – many policemen met the protesters with violence. Citizens got kidnapped and beaten up during the protests. One man died. To the people on the streets the outcome of the election is wrong, a farce and absolutely unacceptable. They fight for their rights. No independent observers (staff of the EU, NATO etc.) were invited to watch the whole election procedure. In addition, numerous apparent irregularities were documented and an Internet-blackout began (lasting for seven days), starting on the day of the election. 3.000 people got arrested on the day after the election in Minsk and other cities during protests. Tikhanovskaya complained to authorities about the falsification of the result. She fled to Lithuania, because she feared for her safety. Her husband is still in prison. Her kids also fled Belarus.

A lot of police officers resigned. Igor Leshchenya the Belarusian ambassador to Slovakia said, he stands in solidarity with the protestors. Ilyia Shkurin a football player in Belarus stated, that he would only play for his own country again, if Lukashenko resigned. The EU also rejected the election and vowed sanctions over violence against protesters.

A woman against a man.

Two ideas of power and the importance of democracy.