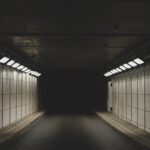 Angst of the Female Prey

Angst of the Female Prey

It was a warm summer night. It smelled of fresh flowers and trees after the rain. A cool-down after hot July days refreshing you for new beginnings. We sat in a circle drinking beer out of brown bottles, forcing them open with the backs of our lighters so we can indulge in the cool bubbly beverage.

As the night grew old nobody was ready to leave yet and neither was I. We had just started a game of bierball in the park and my team was winning. All of my girlfriends and their partners had come together that night to hang out at Gleisdreieck, a park near the city center.

Although the trains run all night on weekends, I soon realized it was time to go. My decision was followed by the others, however, everyone seemed to go in different directions and my friends joined their partners on their trips home further into the city. I don’t live in the city. Normally, we all went back together but this time it was just me.

I would make the choice to take public transport for thirty minutes to get back home. The trip itself was easy. One bus (the M19) and one train (the S1). The train ride was a solid twenty minutes while the bus was only ten. It wasn’t always great to live so far out, but I find it more peaceful than the city, more nature around to see, and definitely far less expensive.

Riding by myself always made me nervous. Whether it was the horror stories of young women going missing, that my mother told me to scare me away from the world, or the harsh realization that she was right about the cruel reality, anxiety always takes over my body, taunting me constantly and conversing with my subconscious. Together they drew out scenarios in my head of my disappearance flooding the news stations with my erratic mother crying why, oh why didn’t she listen to me.

Nevertheless, I had no choice. My friends walked me to the bus stop and waited with me until they were waving me goodbye from my window seat. The bus was fairly empty which made me happy. I felt comforted by the stranger driving the bus. Even though he was one of them, it eased my mind knowing someone would witness harm being done to an innocent young adult woman. That woman being me.

I got off the bus and made my way to the above-ground train stop. The sky was a summer dark blue, not as pitch dark as the winter sky but rather a light navy three hours away from turning baby blue. As I walked on the empty platform I passed two people on the way, an older gentleman towards the front that I made a point to walk far away from and a younger man my age who I trusted just as little. I knew my exit was in the middle but I still decided to wait at the very front of the train station. I marked the end of the platform as a secluded safe space since no one was around. Luckily, I didn’t have to wait long until the train arrived. Those three minutes on the platform felt longer than my entire trip. Time moves slowly when your mind is trying to figure out if someone would hear you scream during a possible dangerous encounter.

The train was almost as empty as the station. Another flush of ease passed through my body as I found an area in the front of the wagon secluded enough for my liking. A young girl around my age entered the train about halfway to my destination. Even though the entire wagon was empty she still decided to sit in the square-shaped seating area across from mine. I knew why she did it and quite frankly, I’m happy she did.

Right when I thought I was safe from any nerve-wracking encounters with scary men, a tall man in his late thirties entered the train and sat not far from me and the girl.

He immediately spotted the both of us and I could feel his stare switching from me to her, focusing on the both of us with his prey-like eyes piercing our exposed skin. I tried escaping his perverse infringement of our privacy by looking out of the window beside me. To my dismay, I could see his reflection in the window and he could see it too. He seemed happy to have caught my eyesight and I almost instantly reverted my eyes away from him.

The girl and I made eye contact right before the train pulled into my station. I noticed her slightly shifting which to me was an indication that she might get off. Unfortunately, he noticed as well. Panic arose inside me and flashbacks to previous memories of my fictional disappearance re-entered my thoughts. She and I both waited almost to the last second to exit the double doors. Right when the doors pulled apart we both bolted out. Unfortunately, so did he.

At this point, my hand gripped my pepper spray feeling for the trigger in preparation for what might come. I thought about how I wouldn’t go down without a fight and how he would have to put up with screaming, pushing, yelling, punching, and biting. I tried to think of all the techniques my male friends have advised me to do in a situation of danger. How I should stab his eye out with my freshly manicured nails and how I should kick him so hard in the groin he might not be able to produce any offspring for the rest of his life and it would cripple him enough not to chase me.

I saw the girl from the train a few steps ahead of me walking in the same direction I had to go. The man was several steps behind me and I could hear his footsteps knocking to the rhythm of mine. Then I thought of an idea I’d seen go viral in the media. I walked right up to the girl and pretended I had remembered seeing her at a boat party three years ago. She seemed clueless at first when I reminded her of imaginary friends whose names I had made up on the spot that we had in common. Just when I thought it was helpless and she might just run away from a crazy girl approaching her on the street rather than the creepy guy from the train, she caught on. She took me by the arm and started reminiscing about that party with those people.

We turned the corner and the guy was gone. I thanked her for her help and explained how scared I was by the ride we’d taken together with this strange male figure who violated our safety. She agreed and we shared our common thoughts and feelings on the matter. Soon after we parted, with my keys in my fist and a few looks back I made it to my front door and entered my apartment building with relief. Relief that tonight I made it home in one piece. Unharmed. Untouched. Undefiled. Rape free.