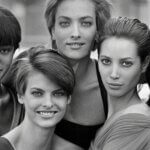 We all know them. We all love them. Supermodels have ruled the catwalks and the fashion scene for decades. But where are they today? Do real supermodels still exist alongside IG baddies and nepotism babies?

They enjoyed the same fame as the stars of the big screen, and the images of their graceful bodies reflected the excessive materialism of the 80s and 90s. In the 80s, photographers such as Bruce Weber, Peter Lindbergh and Paolo Roversi launched their careers. The world created by this generation of photographers elevated models to a star pedestal. The “supermodel” phenomenon was born: supermodels like Claudia Schiffer, Cindy Crawford, Linda Evangelista, Christy Turlington or Naomi Campbell knew how to stage their bodies perfectly. They were the darlings of designers and photographers. They were the stars of their time and hard to beat in terms of fame.

When talking about supermodels, one is directly catapulted back into the 90s. The models themselves decided which label or photographer they worked with and for which campaigns they posed in front of the camera. With numerous cover shoots and contracts with fashion houses like Chanel, Louis Vuitton and Co. they made it to the top together. They became the celebrated stars of the catwalks and were considered idols beyond the fashion world. The fame of the supermodels is still unbroken today. As icons of the past, they are still booked for the most expensive campaigns. Glamorous, provocative, beautiful, accomplished, magical – they were all this and so much more.

The term “supermodel” was coined in the 1940s, although it did not come into popular use until the early 1990s. Many famous models have tried to lay claim to the crown of the original supermodel (most noticeably diva Janice Dickinson), but Lisa Fonssagrives is generally considered to be the very first supermodel. Fonssagrives was a highly sought-after face in the fashion industry from the 1930s to the 1950s. During that time, Fonssagrives appeared on the cover of Vogue magazine over 200 times, which is truly remarkable. The success of Fonssagrives as a model and her numerous appearances in Vogue helped both; the covers made the model a famous face, and Fonssagrives’ long career established Vogue as a powerful force in the fashion industry. To appear on the cover of Vogue became the pinnacle of the print modeling world.

Nowadays we still connect the supermodels with the icons of the past but we haven’t found a modern comparison. And even Claudia Schiffer isn’t sure if supermodels still exist. “In order to become a supermodel one must be on all the covers all over the world at the same time so that people can recognise the girls,” she says. “That is, for now, not possible, not least because the advertising industry is very much taken nowadays by popstars and actresses. Supermodels like we once were don’t exist any more.”

According to Mandy Lee, trend forecaster and fashion expert, the term supermodel ceased to make sense around 2010, largely with the advent of social media, thus with the opportunity for models to have their own voice and exercise it. Before a successful model, often discovered very young or whose family already had ties to the fashion world, was surrounded by an aura of mystery, the saying “be seen not heard” prevailed.  So, no supermodels don’t exist anymore. But it’s not a bad thing.