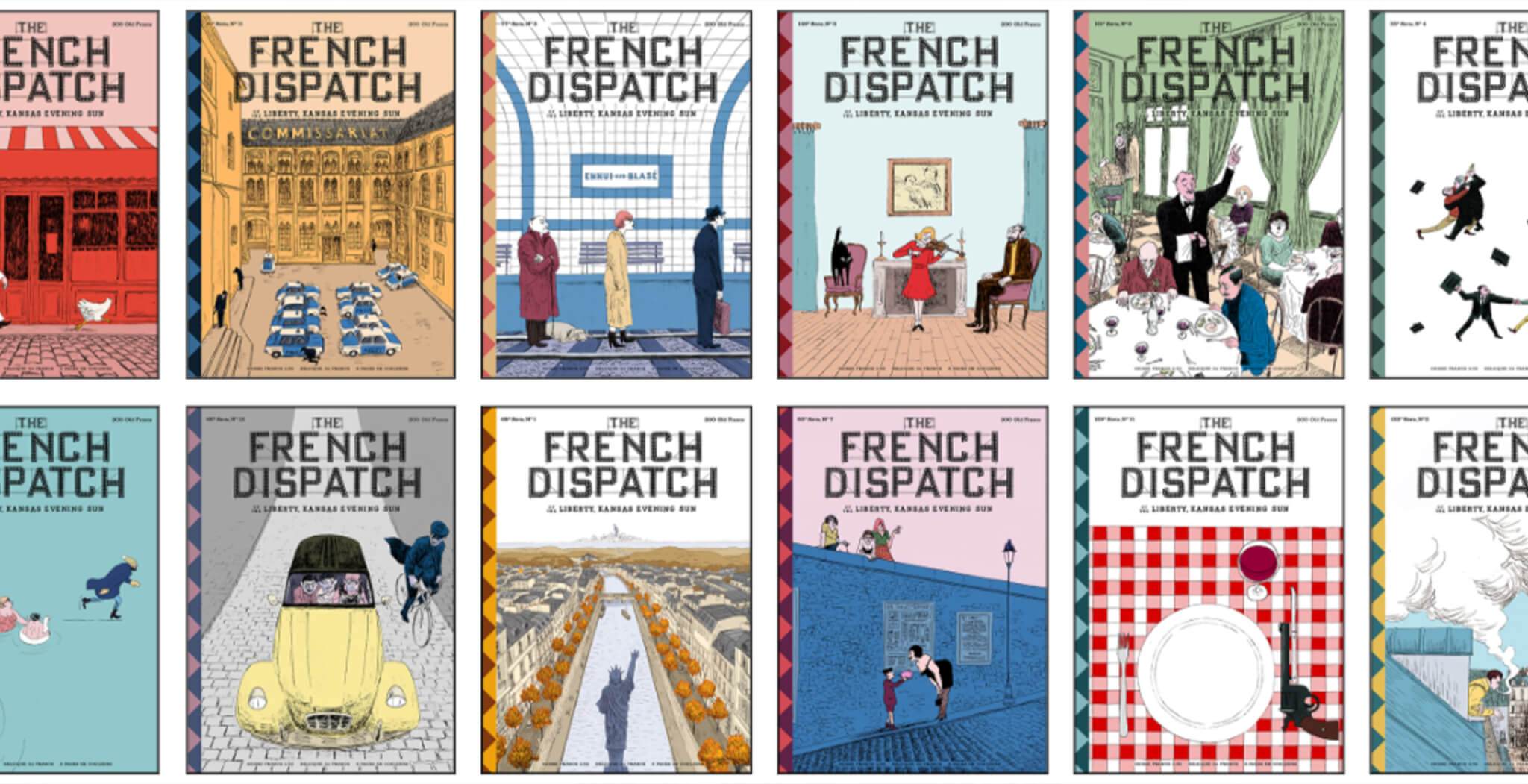 A new film by legendary Wes Anderson hit the cinemas this Thursday. This movie is once again a true masterpiece and a must watch this autumn! Wes Anderson is known for his unique cinematographic and narrative style, which is presented at its best in “The French Dispatch”. This movie is a genuine passion project of Wes Anderson and no role is simply cast but is played by the highest caliber actors. No matter how long the speaking part, the cast brims with exquisiteness. Equally great are the script per se, the animated parts of the film and the choice of music, including “The Passenger” by Iggy Pop, “Bonnie and Clyde” by Brigitte Bardot and Serge Gainsbpurg and an exclusive collaboration with Jarvis Cocker on the song “Aline”, who was also inspired to write a whole new album.

Before I get right into the different story lines, introduce the cast, and explain Anderson’s inspirations for “The French Dispatch”, I had one question I could not leave unanswered:

That is mainly because of its flat and planimetric composition. This means that Anderson uses the orientation of elements of a scene to create a distinct look. The backgrounds are used as flat planes to which the characters move parallelly. All characters usually face towards, away, or in profile to the camera. And the camera moves with, away from, or sideways of the characters. This and compass point editing (cutting at 90 or 180 degrees) reassures the maintenance of a flat background and the planimetric composition.

Supporting the fact that Anderson doesn’t hide but emphasizes the element of filmmaking, is that he does love his center frames, symmetry and precision. Every frame seems immaculately arranged and little flaws or subtle imperfections are used to draw attention to the moviness of the film. Next to that, a Wes Anderson film will without a doubt have meta-narrative or play-like elements, like actual curtains opening, or a story teller as authorial framing. Combining innocent storytelling with genuine emotion and the playful composition creates a unique aesthetic. In addition to that, a certain color palette, the music, and his chosen cast of actors and actresses make it typically Wes Anderson.

The Inspiration behind “The French Dispatch”

As mentioned before, this film is a project of the heart. Wes Anderson always wanted to publish a collection of short stories, an anthology. Then there were the director’s passions for French films and the newspaper The New Yorker. Inspired by these factors, “The French Dispatch” was born.

Although “The French Dispatch” is not literally based on The New Yorker magazine, it is totally inspired by it. Before the film came out, Anderson even released a collection of essays and journals from famous writers who wrote for The New Yorker. “An Editor’s Burial” is a glimpse of post-war France through the eyes and words of 14 (mostly) expatriate journalists including Mavis Gallant, James Baldwin, A.J. Liebling, S.N. Behrman, Luc Sante, Joseph Mitchell, and Lillian Ross. The publication also includes portraits of their editors William Shawn and New Yorker founder Harold Ross (who basically invented modern magazine journalism), an introductory interview by Susan Morrison with Anderson about transforming fact into a fiction and the creation of his homage to these exceptional reporters.

But why The New Yorker? Wes Anderson first discovered the publication in the 11th grade and would start collecting bound issues when he was in college in Austin. Typically for an aspiring fiction writer, he mainly gravitated towards the published short stories.

The New Yorker is quite a unique magazine that emerged in 1925, a time after war and a pandemic, in which the Americans were reading like they never did before. The publication had to be artful, amusing, and full of new ideas just like its co-founder Harold Ross, who partly inspired the character of Arthur Howitzer, Jr. Ross was a true go-getter and visionary. The first issue consisted of a wry mix of reporting, short stories, and funny illustrations. It sold out in the first 36 hours. However, Ross never wanted mainstream success. He wanted to be purposeful, serious, yet witty. And eventually, he has to be credited for his perfectionism and his talent for recruiting the most fantastic writers, artists, and storytellers. And Wes Anderson can go right into that list.

Of course, Wes Anderson relies on his standard actors, such as Adrien Brody, Anjelica Huston, Owen Wilson, or Bill Murry, who is Wes’ favorite partner with seven film collaborations. These two are with no doubt the greatest actor-director team in Hollywood. Further familiar faces from other Wes Anderson movies would be Willem Dafoe, Edward Norton, Tilda Swinton, or Jason Schwartzmann.

For Frances McDormand, Saoirse Ronan, and Léa Seydoux “The French Dispatch” is their second film with Anderson as their director. It was completely new territory for Timothée Chalamet and Jeffrey Wright. Both actors sincerely deserved their Wes Anderson debut and scored with a truly stellar performance in their respective roles.

Without wanting to spoil anything before you watch the movie yourself,  I just wanted to point out that “The French Dispatch” has four storylines that are tied together with the discussions taking place during the editorial meeting of the staff of “The French Dispatch”.

Firstly, the issue in progress will entail a story called “The Cycling Reporter” by Herbsaint Sazerac, played by Owen Wilson. This editor is introducing the reader or actually the viewer to the town of Ennui-sur-Blasé, the hometown of “The French Dispatch”. The scenes were shot in the beautiful city of Angoulême, which is the perfect setting not only because of it’s typically French architecture and scenery, but because it’s home to many talented animators whose work (supervised by Gwen Germain) can be seen in this part of the film.

The second story is “The Concrete Masterpiece”, written by J.K.L. Berensen, the art correspondent for “The French Dispatch”. This character is inspired by the legendary Rosamond Bernier and is personified by Tilda Swinton. The editor Berensen tells her story while lecturing to the audience about the incarcerated artist Moses Rosenthaler who created the artwork of his lifetime encouraged by his muse and guard Simone and art dealer Julien Cadazio (Adrien Brody).

The third storyline presents the “Revisions to a Manifesto” by Lucinda Krementz, played by Frances McDormand. The role is in parts inspired by Mavis Gallant, the celebrated writer of the “Paris Notebooks” on the events of Paris 1968. Similar to these happenings, this part tells the story of journalist Lucinda and the student revolutionaries that demand change on the streets of Ennui-sur-Blasé.

The fourth story is inspired by A.J. Liebling, James Baldwin, and Tennesee WIlliams. Impersonated by Roebuck Wright, the food/social critic of the magazine, played by Heffrey Wright,  finds himself in a TV interview and is challenged to recite one of his stories, “The Private Dining Room of the Police Commissioner”. Luckily Wright has a typographic memory and is able to tell the whole story on the spot.