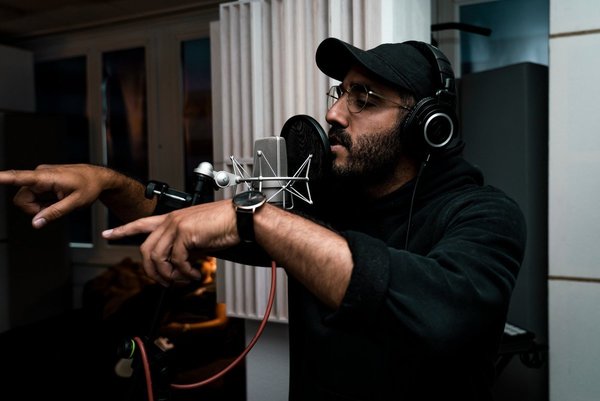 Sit In On Friday: Spit some bars, 4RAS

Sit In On Friday: Spit some bars, 4RAS

We are VERY hyped to present you guys some real vibes! This Sit In On Friday is about to go down. We hope you enjoyed our last week’s one of a kind CATT.

Ready when you are.

4RAS – The newcomer that despite modern sound with a reminiscent of old school: the little and big brother.

Speed, individual flow and a lot of charisma manifest his own path into the industry. The rapper puts a lot of soul (and a pinch of old school) into his music and celebrates one thing above all:

At the age of 13, 4RAS discovered his love of music and made his first footsteps in hip hop by trying out beats and bars with like-minded people. The fact that he only rapped in English in the beginning helped him during his time in the USA. Later the Hanover based rapper even released some English tracks under the pseudonym Ayzee. He returned to his German roots and found out what really makes his sound so individual.

In his current album “A.R.A.S.” (“ALLE REDEN ABER SCHLAFEN”), the 30-year-old rapper mainly deals with himself and criticizes his old vices.

“The creative phases in the past years were always associated with long breaks – projects fell asleep”.

Don’t sleep on him, fellas! Convince yourself: while his first mixtape hits the priority stage, the second is already in the pipeline.

TITLE: First of all, of course, we want to know from you what True Identity means to you ?

4RAS: True identity to me, is being fully in touch with yourself and being in balance with your life. Accepting everything that life or you taught yourself. Being proud of who you are and embracing your flaws and failures.

TITLE: What is your first memory or experience of hip-hop ?

4RAS: My first memory was walking into my brothers Room and Nellys „E.I“ was playing. Shortly after „X“ by Xzibit came on. I was hooked instantly.

TITLE: When did your journey start  ?

4RAS: I started making music when I was about 14 years old, but professionally maybe for a year now.

TITLE: When do you feel most creative and most inspired to make music ?

4RAS: Either when im very low and blue or when im happy and energetic. Usually when I accomplished something or when I just want to get something off my chest and head.

TITLE: And how does the current situation influence your creative process ? What are your musical or creative goals for the next few years ?

4RAS: Corona honestly was a blessing in disguise for me. So many good things came out for me. Im aware that a lot of people weren’t as lucky as me, so im extremely grateful for everything that is happening now.

4RAS: The biggest achievement for me was to support my mom financially with money that came from my music. I proved, that it wasn’t just a hobby and also helped her with it.

TITLE: Was there a musical experience, a concert or a performance that touched your soul ?

4RAS: 2012 at the Frauenfeld Festival. It was midnight and my birthday and Mos Def was dressed in all white with a bright red microphone and performed „Umi Says“. I had goosebumps foreal foreal.

TITLE: If you could speak to yourself in the past, what would you say to him ?

4RAS: I would tell him „Bro get organized and build yourself a structure you can work with“ and also „HUSTLE!!“

TITLE: Let’s dig a bit deeper: do you think that you can ever be aware of your True Identity or that self-development is a fluid process that doesn’t really stop ?

4RAS: I think our identity is always being shaped by the circumstances we’re in and the experiences we make. It would be boring if the process of developing your identity stopped.