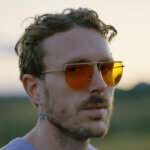 An Interview with Norwegian Musician Gundelach

An Interview with Norwegian Musician Gundelach

How much do you know about Norwegian mythology? In my case, not very much, however, I did come across this specific story about a magical creature called “Nøkken” in one of Gundelach’s songs.

“Vi Er Nærme Nå” begins with an atmospheric guitar surface and takes the listener into a dream world of Norwegian mythology. Nøkk, the Nordic version of the German Loreley, appears to the listener in the form of a white horse and lures him into its spell until you can no longer escape and feel completely at its mercy.

Musically, exactly this story is told – the picking guitar of the first verse is surprised by a voice overlay and both merge into a gloomy-mythical sound. In the chorus, an 80’s sounding synth appears and changes the mood to a positive vibe before the Norwegian lyrics present the opposite position of the Nøkk, describing how horse and man merge together.

“Vi Er Nærme Nå” is a dreamlike journey that captivates the listeners from the first second. This is exactly the strength of Kai aka Gundelach, who already caused a sensation in the Oslo DJ scene at the age of 16 and was even able to inspire Pharrell Williams for his music.

This was released in August and was the first sign of life after quite some time. Since then, Gundelach has released another song “Riverside” and is currently working on more new tracks for his upcoming album.

How did you get into making music? When did you know that music would be your career?

When I was a teenager I really wanted to become an actor, so when I was 19 I went to school to study acting and later applied to the Norwegian national acting school, which is really hard to get into. I was incredibly nervous and unprepared, and shakily delivered a monologue to a dark room with 4 judges sitting at the back. On my way out, the room was so dark that I couldn’t find the door, so I accidentally overheard the feedback from the judges, which was not very positive. I felt pretty bummed out, and on the tram ride home I decided there and then to approach music as a career rather than a side hobby as I had done for many years previously. It was actually very freeing to have this realisation, and accept that I didn’t have it in me to live the difficult actor life.

How influential is your home country Norway to the music you make?

To be honest I don’t think it has a huge influence. I don’t know anything else except from living in Norway, so I suppose subconsciously I must be influenced because of the culture and where I’m from, but it isn’t something I consciously think about when making music.

Which artists do you look up to, and/ or have been an inspirational source for your previous albums?

I try to have my own inner monologue as my greatest inspiration, but of course I am naturally inspired by other art forms as well, and everything I consume in every day life. I am a huge fan of the Norwegian writer Kjell Askildsen who is best known for his short stories, and I am definitely very lyrically inspired by him. Musically I listen to a lot of “dad rock” nowadays such as the Dire Straits, although I also try to keep up with hip-hop, rap and a lot of electronic and ambient music.

What story are you telling with “Vi Er Nærme Nå”, which sort of means “we are close now”?

The inspiration behind the lyrics is the feeling and energy that exists between two people. It can be very vulnerable and hard to describe. It’s a song about human connection, whether it be a romantic relationship, between friends, between a parent and child, or the relationship with oneself and how it can change slowly with time or in the blink of an eye.

Furthermore you integrated a Norwegian myth about the Nøkken, a magical creature in shape of a white horse into your song – what is this story about and how would you describe your connection to Norwegian traditions, stories, and culture in general?

The story about “Nøkken” is one which many Norwegians will be familiar with from when they were a child. Often parents would use this story as a way to prevent their children from playing too close to the water, as it is about a creature that lives underwater and will drag you down until you drown. It’s really quite morbid but I’ve always been attracted to kind of dark, scary stuff.

When writing the first couple of songs on this record I was trying to conceptualise it in some way, and there was a week where I stayed at my father’s cabin to work on music. I found an old book he had about Norwegian mythology and rediscovered the story about Nøkken and it really inspired me.

Being Norwegian I grew up with a lot of these stories and mythology around me of course, so I suppose subconsciously it must affect me in some way, but it isn’t something I directly focus on connecting with when writing my music.

It seems that you used the pandemic for winding back and having time to write new songs, as you are going to release more this and next year. What did you learn about yourself during lockdown?

The pandemic has generally been quite boring for me, but I think I was lucky to have become a father right at the beginning of Covid. That has definitely had a huge impact on me as a person and shaped me as an individual. In terms of my artistry, I think the pandemic has taught me to live more ‘in the now’, or try to at least. I am also trying to be less critical towards myself and to just go with the flow a bit more.

Your songs are often melancholic and you tell deeply personal stories. What is most important to you when writing a song? What do you want your listeners to take with them?

I think the most important thing for me when writing a song is just to be as true to myself as I can be and always try to make something that feels right for me. When it’s released I just want people to make their own truths about the songs and maybe connect the songs to their own lives. I have worked through a lot of hard times in my life through music and have felt really connected to specific songs (and still do), but I’m sure that the artists making them didn’t intend to make them about my life. But that’s the beauty of music – you make your own connections with the songs. I have always been melancholic so that is the most natural kind of music for me to make.. if I made super happy go lucky records I would feel like a scam!

Which future project can we expect from you? And what are you most looking forward to in the next few months (personal or professional)?

With the upcoming album, I have tried to avoid feeling anxiety and bad thoughts about the whole process. Instead, I have tried to be really fluid and just have fun with friends and playing live instruments. My band mates have been a big part of the recording process this time, so you can expect a much more live approach, and of course I think the songs are pretty good! There will be an album around Spring 2022.