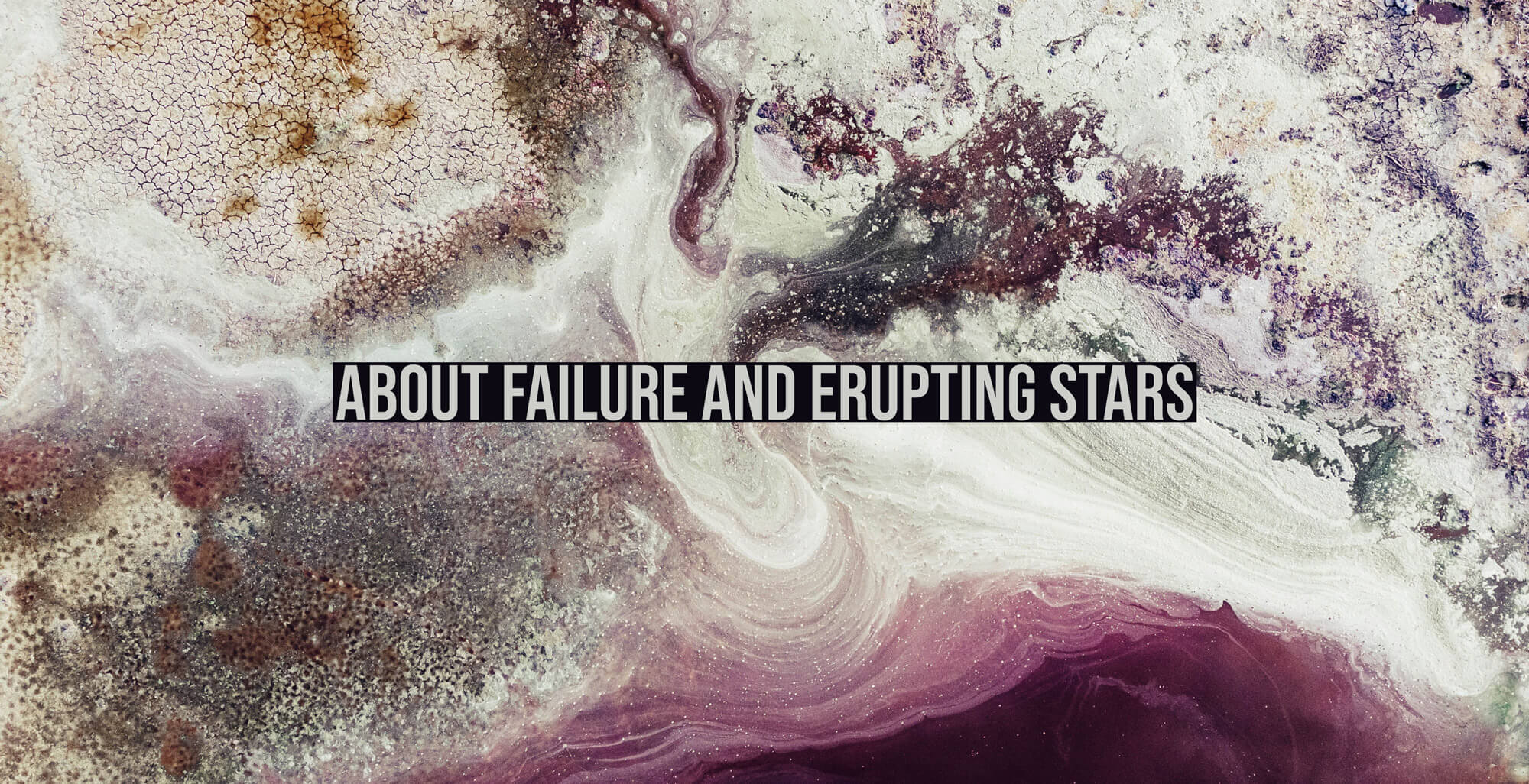 About failure and erupting stars

About failure and erupting stars

I always say that I don’t like to talk about failure, but that’s actually a lie. I don’t like to talk about my failures, but about everyone else’s failures with them. I am the impersonation of the caring friend, who would come and comfort you, tell some inappropriate and in my opinion hilarious jokes, pour you a cup of tea, then red wine and an espresso shot so your heart would start racing so badly that you would forget it’s broken.

That’s me. Or, at least how I see myself. And I truly believe all of the advice I give, like “grades don’t define you”, “it won’t matter”, “have fun”, “be kind to yourself” and so on. The classic Instagram-aesthetic bullshit.

But all of this doesn’t apply to me.

I’m harsh to myself. I’m like the coach in every Disney-movie everyone hates: I would wear an ugly tweet-sweatsuit, be a middle-aged man and have a moustache. My head constantly red from the high blood-pressure and overconsumption of meat and beer. But I’m 19 and I’m hustling the shit out of my life with mediocre success for the amount of effort I put in it.

No one puts me under pressure to work two jobs, study two subjects, have a social life, while trying to maintain a more or less (it’s more the less) healthy lifestyle. I know how this sounds like I’m whining, give me attention. This is my cry for help to stop working so much and being “successful” blah blah blah – bullshit. Last year in summer I wrote a piece about how I almost wrecked my brain while doing nothing.

OR people think of themselves as gods. Imagine a life where your ego pushes you so high up in the clouds that everyone else seems as tiny as ants. Feeling like Icarus without the crashing fall, because these people don’t feel it, they simply believe that they cannot fall and sometimes, maybe even most of the time, they won’t. I don’t know many narcissists my age in real life. I feel like Gen Z just threw the scale to measure a healthy relationship with oneself and the acknowledgments of one’s achievements out of the window. According to the mantra: “Fuck it, let’s do it our way, the middle (part) way”. Where you can either choose – behind the left door: always going further, never stopping, or the right way: loving yourself so much, no one else can ever come near that with a tendency to go left, because it makes you more approachable. Like I said, people love to give advice and people love to complain and whine. This is my pledge to keep whining and complaining but at the same time giving oneself more credit for everything we have already accomplished.

I mean, at least until now, we have made it through a fucking pandemic. What a terrible movie life would be, if your end-boss would be yourself. Catharsis à la Transformer I don’t know how many parts are already out.

I know idealism is out – we live in the neo-realistic age and I’m for sure no optimist, but I think it won’t be possible to achieve almost unachievable things (which we, as humanity will have to do in the next years) with an inhumane and unkind mindset towards ourselves. We might go straight forward and pursue our careers, but the stars which once might have symbolized our dreams will have erupted and turned into black holes, sucking up everything that comes near them. When we don’t have dreams anymore, who are we? Isn’t our own identity built around striving to achieve our goals? Therefore, we can reinvent ourselves as much as we want. Going from one failure to another and openly talking about them, so everyone can give advice, which they also might follow themselves.

Now, everyone, I will tell my friends how I fucked up a seminar paper for one of my Uni courses and complain to them in a very annoying voice.

I’m looking forward to it already. And what about you?