HYSTERIA or: a powerful cry for normality

HYSTERIA or: a powerful cry for normality 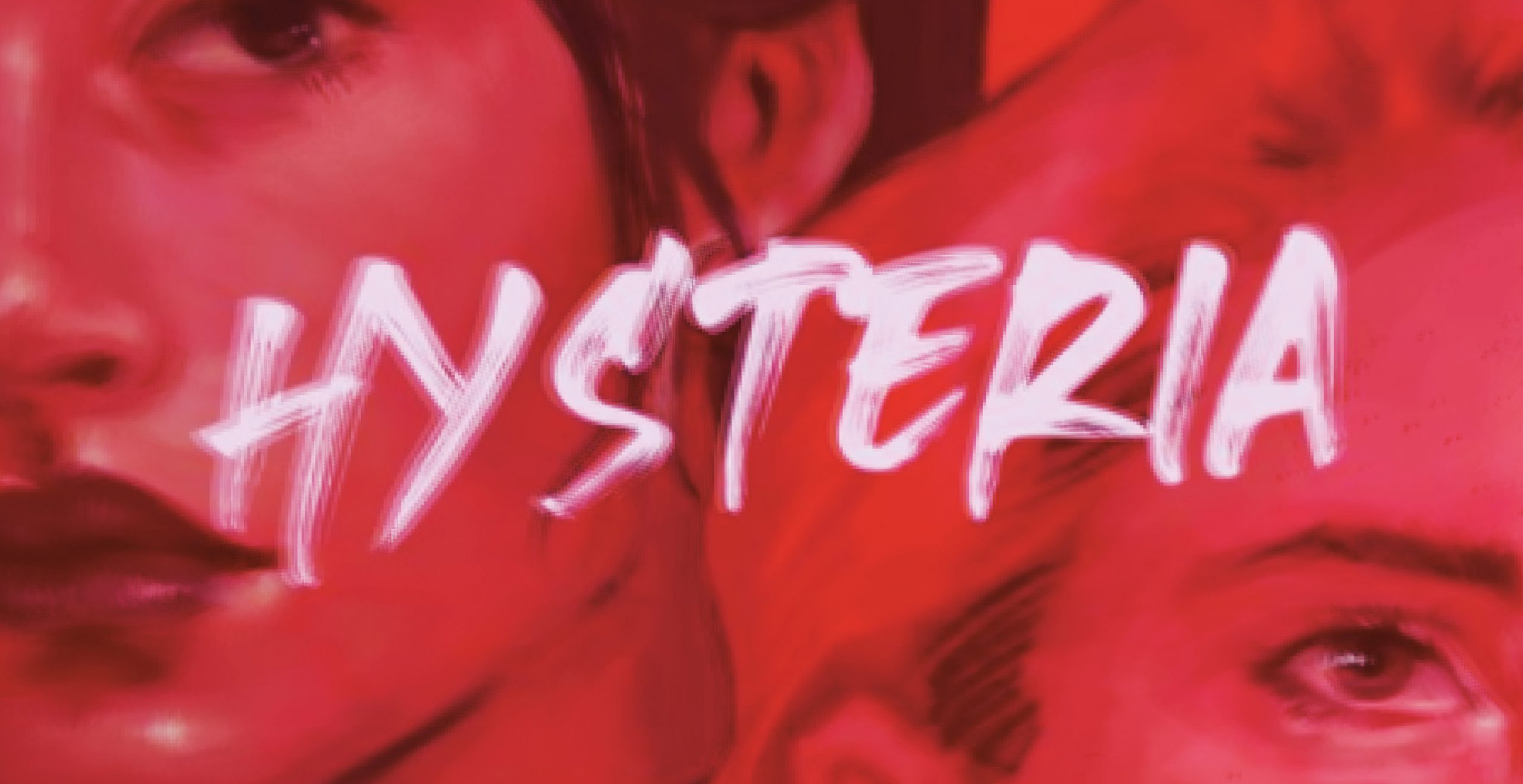 Growing up female (no matter if you identify as female or not), you are sooner or later  going to gradually encounter situations that are not going to make any sense to you; Getting told to cover up in sports class while you are just a little girl so the other boys and teachers wont get distracted by you, getting told to ignore cat calls on your way home so „nothing worse“ than verbal abuse will happen to you. With time you will start to wonder why it seems impossible for many men to respect your boundaries, let alone a simple „no“or the meaning of consent, meanwhile you´ll realise queer womxn dont feel the need to tell every other girl on the street how much they would like to have sex with her.

I guess the worst parts for many women are the hollow comments from the ones you are sharing your uncomfortable experiences with, the lack of accountability from a system that is supposed to protect you and last but not least the constant reassuarance that change comes from inside and can’t be granted up until male misbehaviour wont be excused with the „boys will be boys“ card.

We spoke with the young film maker Charlot van Heeswijk about her newest project „HYSTERIA“ a queerfeminist tale of anger, frustration and solidarity. It aims to further a conversation on how to deal with sexual harassment and to illustrate the realities of living as a womxn as well as showing how we can defend and empower ourselves.

Set in present-time Berlin, the story focuses on the relationship between two young women – Daja, smart and sensitive, has just fallen in love with Robin. She admires her integrity and sees in her everything, that she is not: Robin is strong-willed, honest and doesn’t waste her time giving too many fucks about things. What was supposed to be a carefree night out takes a sudden turn for the worse. A group of boys starts harassing them, first verbally, then physically. In an attempt to defend herself and Daja, who becomes overwhelmed and simply freezes, Robin throws the first punch… and takes a beating. A rift opens up between the two women, forcing the couple to confront their ideological differences and prompting Daja to embark on a journey of self-discovery.

1. What was the breakpoint for you to realize you had to make „Hysteria“?

As a woman, especially as a queer woman, you start developing a thick skin when faced with everyday sexism. In the past I think I let a lot of injustice towards myself slide because I didn’t want to come off as short-tempered or touchy… And that’s on internalised misogyny. I had equated being offended by sexism with being “weak” for the longest time. That definitely changed after I moved into a bigger city, grew more confident in myself and owning my identity as a queer woman – being stared at, catcalled and receiving sexist comments on a daily basis didn’t read the same to me anymore – I learned to recognize it as a tool of oppression. It was a process – learning to transform the frustration I was experiencing into anger and breaking out of passivity. But anger is a great motivator and it was one incident specifically that pushed me to write the script for HYSTERIA:

I was having a fantastic day, feeling really good about myself for once, wearing a red blazer, red shoes, red-ish hair… and this guy passes me on the street in broad daylight and goes “I bet your pubes are red too.”. I flipped him off immediately but I was terribly annoyed at myself for not having come up with a better verbal comeback. It stuck with me all day. It actually ruined it. I was reliving the same scenario over and over again and it just made me so mad to think about the fact that this guy has probably forgotten about it by now. Men constantly put women into these positions, demanding a reaction – but no matter how you react, either you’ll end up being frustrated for not having stood up for yourself or you get called “hysterical” for overreacting. You might even put yourself in danger. I think a lot of men don’t understand the consequences of their actions. I realised that with HYSTERIA I had to make a Film that is both – a chance for boys and men to understand what it’s like to be forced into these situations as well as it being a catharsis for women, in which they can identify with characters that are going through the same experiences as they are. However, our approach to the topic is intersectional – Robin, as POC woman, experiences sexism differently than Daja does as a white person. They both are queer – whenever I was dating a woman, men would constantly interrupt our intimacy on a night out to ask if they could “join in” or “prove” to them that we were really in a lesbian relationship. Yikes.

2. Do you remember your first catcalling incident?

I can’t recall an exact incident but I was definitely quite young and still in school – maybe around twelve or thirteen. And it wasn’t adult men but my male peers during sports class. This was around the time most girls were hitting puberty and it was pretty much normalised that boys would comment on our changing bodies. I specifically remember being shamed for my flat chest back then and it took well into my 20s to be able to shake that.

3. Why do you think it is so hard for men to understand obvious boundaries in regards to respect towards the other gender?

This is pretty much where the issue starts. There was never an intervention from adults and it was always normalised and downplayed by teachers and authority figures as “boys will be boys” or “it’s just a joke, he didn’t mean it like that”. We’re creating an environment in which this macho behaviour is actively encouraged in boys and girls are being told to just smile it away. It’s no wonder adult men don’t get why catcalling is an issue and a lot of womxn often don’t even realise when a boundary is over-stepped.

4. What do you think would need to happen for things to change sustainably and in the long run?

We need to start to protecting victims and call out bullies as well as actively educating about sexism in schools in order for this to change. This has to include girls and wxmen learning to recognise catcalling as a sexist offense that demands a clear reaction: No, you do not have no right to objectify me like this, this behaviour is unacceptable. It’s 2020 and it’s ridiculous to me that we are still talking about this.

Another big issue is that a lot of men feel clearly antagonised by the feminist movement while failing to see that feminism includes them, too and that they will ultimately benefit from it. In order for things to sustainably change, we have to deconstruct and rethink the idea of masculinity and what it means to be a “man” in our society. Stop shunning boys and men for showing human emotions. Abolish the concepts of male = strong, active and female = weak, passive. Stop putting children in boxes and let them be children, help them grow into confident adults, no matter their gender.

5. Do you think in an ideal world younger girls (but especially boys) in school should be introduced to the real meaning of consent?

It’s not just that we need to teach girls how to protect themselves, we need to start educating boys too about boundaries and consent. I think a lot of this boils down to the harsh distinctions we make between boys and girls, male and female – boys grow up to view girls as this alien species: They are taught that girls are very different from themselves so the same rules of respect don’t apply. And of course there needs to be an awareness that girls and womxn face a different reality than boys and men – but we’re ultimately human and deserve to be treated as such instead of being viewed as an object. Introducing the concept of consent should not only happen in schools, the media should be held responsible for this as well. Looking back on it now, as a kid and teenager I remember constantly being exposed to dubious consent in films and television and rarely seeing “healthy” relationships being portrayed. Sure, not every story being told has to be educational in such a way, but the fact that the media has been normalising and even romanticising the idea of men “chasing after” womxn since forever plays a big part in why boys and girls alike grow up thinking this is just the way things are. Female characters rarely play an active role in mainstream cinema – they are usually trophies to be won or tools to further the male hero’s story arch while lesbian womxn usually end up being over-sexualised instead of being portrayed as real, three- dimensional humans. Adding to this, we rarely ever see complex relationships between womxn on screen. I think we still have a long way to go until this changes fundamentally. I believe that, next to educating kids about consent and feminist topics, changing the way womxn and men are portrayed in films, breaking the stereotypes and introducing more queer characters to mainstream audiences is what will ultimately move us forward.

6. What learnings would you like people to gain from watching your film?

HYSTERIA is not about bashing males, it aims to make an everyday experience of (queer) womxn palpable to a broad audience, including men. I want to further a discussion that has already been going on in feminist circles for way too long: How do we deal with public harassment? Ignoring it will ultimately not change the root of the problem. But is there ever a right way to deal with it? As long as it happens, womxn need to find the strength to fight back and stand up for themselves. At the same time I want to shine a light on how important it is to solidarise with other womxn – you are not alone in this fight. Ultimately womxn are more than what happens to them, this goes for our characters Daja and Robin, too. I’m trying my best to make a film that is representative of this.

HYSTERIA will be released in September and is currently taking funding donations via startnext: https://www.startnext.com/hysteria