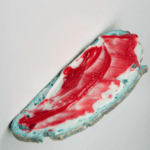 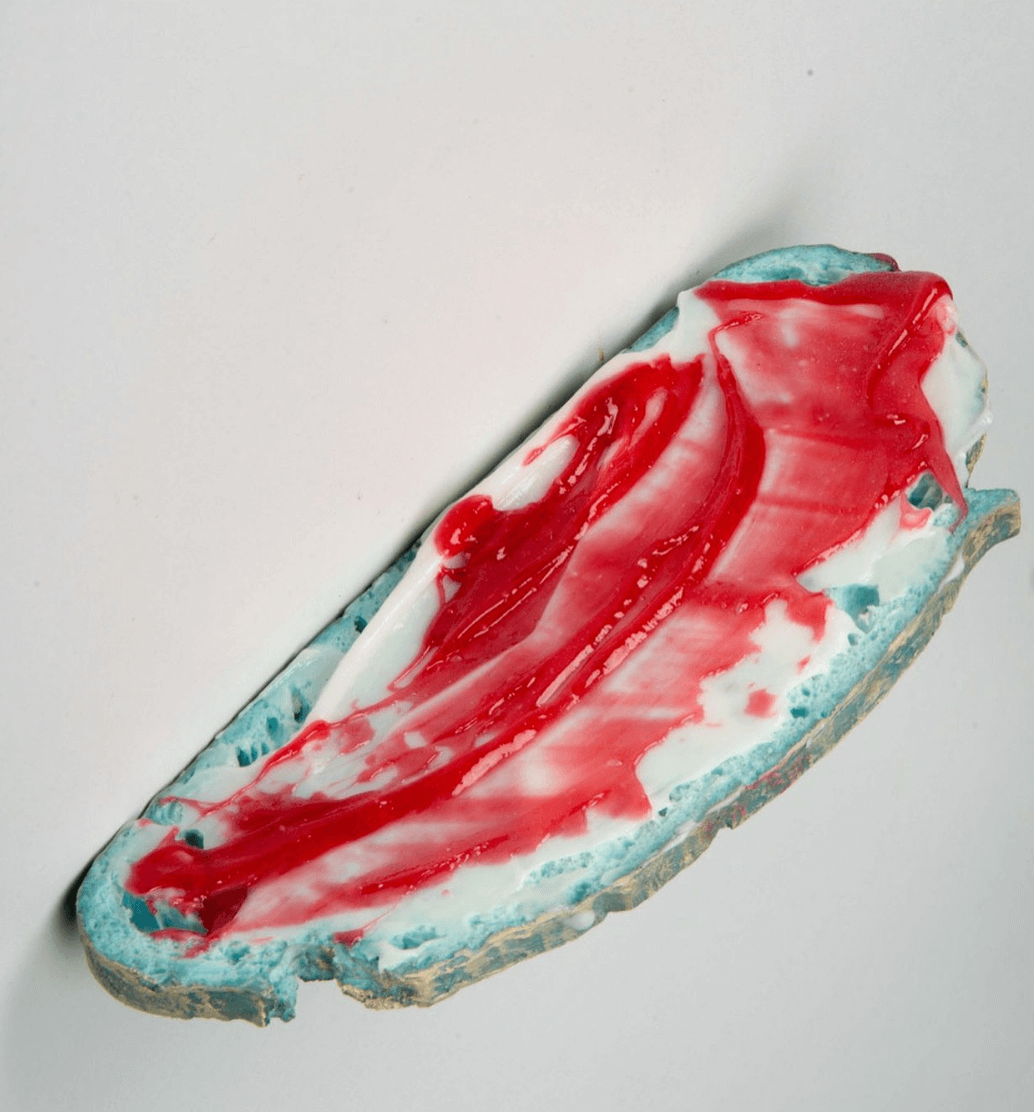 UV resistant grunge candy between transience and decay. As if they are held inside a preservation glass. Giant cakes melting in a Makoto Shinkai cartoon. The artist Vincent Olinet creates large-scale installations that undergo metamorphosis. Slices of bread as shelves. Growing like a bark mushroom from a tree. Climbing up the walls with polyurethane resin. Sculptures are rendered with a chainsaw. Adding frozen texture with zero gravity. To butter up a subversive illusion.

If you got a stamp when landing on earth, like entering a nightclub, what icon does it have?

A watermelon slice or a wildflower.

What materials and textures do you like to touch?

I use my hands to see objects. Sensing the lines of sculptures, the defaults, and asperities. There is a place in the Louvre for visually impaired visitors. I would love to visit these entities and materials in a new way. As a child, I could sense everything. Texture, sound, and weight. Touching smooth surfaces like polished marble and wood.

What was the first thing in nature you remember observing?

The course of the sun. A ray of the sun moving on the floor. If you pay attention you can see it moving within five minutes.

When did you build something for the first time?

I drew a comic that you had to read backward. As a child, I built many things. From a periscope with carton tubes and mirrors to a small cinema projector. Using flashlights and a magnifying glass. Making my reels by hands on see-through paper. It worked out when I discovered I have to construct a spinning shutter that shows images one by one. My cartoons were two seconds long though. I aimed to be a film director. Coming up with my own special effects. Like a small dinosaur or crashed airplane that I later filmed, producing my own movie. For fun, I drew piano keys on a long stripe of paper, so I could play on a table. Building a rocket designed to be propelled with cigarette butts. Drawing my own board games with my siblings.

What does enlarging the scale do to the viewer?

Enlarging a scale. Like seeing things from a child’s perspective. When you come back to a place you have not seen in years and find everything oddly small. I sculpted some big watermelon slices in oak, to translate the idea of the fruit flesh into another natural material. As if it has naturally evolved.

What is space for you?
Space in art differentiates a sculpture from everything else. Never seizing the full vision of an object at once. You have to move around it. Different points of view will open up new perspectives to look at objects. Inviting you to look closer. Space can be the sculpture itself. At the same time the scene where the sculpture evolved, like the four-poster bed floating on the water, changing its surroundings by its presence.

How did you come up with the idea to make “resin shelves”?
Before being resin shelves they were bread shelves. I’m obsessed with eating bread + butter + honey. I thought this bread slice must have another use than just feeding me. So it became a shelf. I appreciate the absurdity in it. And the logic in the madness.

Why melting cakes?
Cakes are expected to be a success or appetizing. I wanted to do the opposite. Making them sloppy, collapsing, and disgusting. When I was still an art student, my first experiments were made of sugar. I found it stimulating to rush the making.

How long does it take to build one cake/ slice of bread?
One or two weeks of many steps. Shaping a mold for a strawberry and creating small polymer sprinkles. Taking chocolate resin and throwing smarties on it. Pouring the compound with a grand momentum. Letting the cake gain energy from this process.